© Christian de Ara Ujo/shutterstock.de
The shape of skis has constantly changed over the years.
Index
The origins of skiingSkiing reaches the AlpsThe skiing boom since 1900Skiing as a mass sport since 1950Skiing today

The origins of skiing

The beginnings of skiing and the pioneers among skiers are entwined in numerous stories. A cave drawing in Norway, whose age is dated to approx. 4,500 years, is supposed to represent the image of a skier. In Sweden, a ski was found which is also said to be 4,500 years old. It is not possible to say exactly where and when a person first stood on skis. What is certain, however, is that thousands of years ago people in snowy regions came up with the idea to attach long boards under their feet so as not to sink into deep snow.

The fact that the origins of today’s skiing lie in Norway is historically proven. Also the term “ski” is Norwegian and means something like “log, split wood”. In the 18th century the Norwegian army had already set up ski units, and over the years skiing as a leisure activity became more and more popular among the Norwegian population. Around 1850 the first ski races took place in Christiana, later to become Oslo, and instructions for skiing appeared around 1870, also in Norway. In the province of Telemark, the Norwegian Sondre Norheims developed a binding in which only the tip of the foot is fixed to the ski: Telemark skiing is still very popular today. The increasing popularity in Norway and the crossing of Greenland by polar explorer Fritjof Nansens in 1888 led to a real ski boom in Central Europe at the turn of the century. Nansens wrote a book about his journey through Greenland which inspired many young people to try the new sport for themselves. 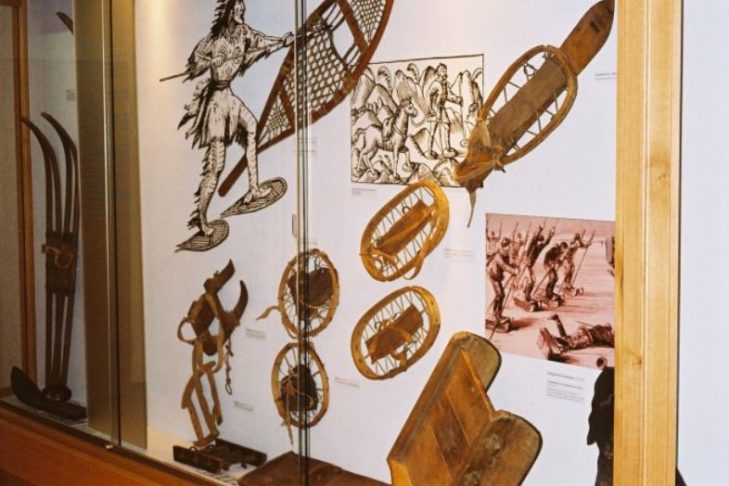 © Deutsches Skimuseum Planegg
Here, you can learn a lot about the history of skiing: historical skis and snowshoes in the museum.

Due to the increasing popularity of skiing, the first ski clubs were founded in the 1890s, where Scandinavian students first passed on what they had learned. Clubs were founded in Germany (Todtnau), Switzerland (Glarus) and Austria (St. Christoph am Arlberg). Occasionally skiing was even taught in schools. In 1896, for example, the pupils in Braunlage in the Harz Mountains received skiing lessons instead of classical gymnastics lessons, depending on the snow conditions.

In the Alps, however, a problem emerged: the Telemark turn, which was optimal for the rather flat Scandinavian mountains, was not well suited for the much steeper slopes of the Alps. The technique was constantly changing in the direction of the stem turn and the skis were also adapted to the new conditions. The skis imported from Norway were usually about 3 meters long and therefore difficult to turn. The painter and sculptor Mathias Zdarsky bought some Nordic skis and was disturbed by the length which made it difficult to ski on the steep slopes of his homeland. So he shortened his skis with a saw to a length of 1.80 m and was able to wag down the valley with the much more turning-friendly skis with a smaller radius. The “Lilienfelder binding”, a binding which fixes the tip of the foot as well as the heel, made the painter’s ski unique, and he declared his ski to be an “alpine ski”. In addition, while experimenting, Zdarsky came up with the idea of sawing his skis narrower at the height of the bindings. The waistline made it possible to make winding turns and the first version of the carving ski was born. In 1897 Mathias Zdarsky published a book about his specially developed skiing technique. His “Lilienfelder skiing technique” made Zdarsky the founder of alpine skiing technology.

A milestone was set at the beginning of the 20th century: the first ski lift was put into operation in 1908. In Schollach near Eisenbach in the Upper Black Forest, a lift was built which was operated by a water-powered mill wheel. The lift overcame 32 metres in height and was 280 metres long. Skiers held on to specially shaped pliers attached to a rope that pulled winter sports enthusiasts up the mountain.

After the First World War, skiing became rapidly more popular, as tourists were now able to travel down the railway lines built during the First World War and waver down the slopes of the Alps. In the 1920s the first ski schools which were not run by ski clubs were opened, to teach tourists how to ski. In addition, the first films showing skiers were shown in cinemas. This also aroused interest in winter sports among people who had never been to the mountains before. In the 1920s, competitions were held on a regular basis and rules were laid down for them. The International Ski Federation included the alpine disciplines in its programme and in 1931 the first World Ski Championships took place in Mürren. Alpine ski races became Olympic only five years later in 1936. At the 1931 World Championships Anton Seelos convinced with a previously unknown technique and the parallel turn developed into a widespread technique on the slopes. Seelos later passed on his knowledge as coach of the German and French national teams.

Over the years, skiing developed more and more into a leisure sport for the masses. Especially in the 1950’s, numerous lifts were built and slopes were developed. The lifts could transport more skiers, and ski regions became more and more attractive for tourists. In addition to the more modern ski lifts and cable cars, a tourist infrastructure was created around the ski areas. Mountain huts were opened and numerous accommodations were set up, which were mainly used by tourists in the winter season. The number of skiers has increased enormously over the years. While in 1950 only around 5 million people worldwide practised winter sports, by 1975 the figure had risen to 35 million. For most winter sports enthusiasts, the focus was and still is less on performance than on fun in nature with friends and family. In addition to the classic downhill run, skiers also began to try out a variety of ways. Skiers raved in deep snow, on moguls, jumps and kickers. Thus, at the end of the 20th century, disciplines such as “mogul piste”, “freestyle” and “freeride” emerged. Some of these disciplines are also Olympic. 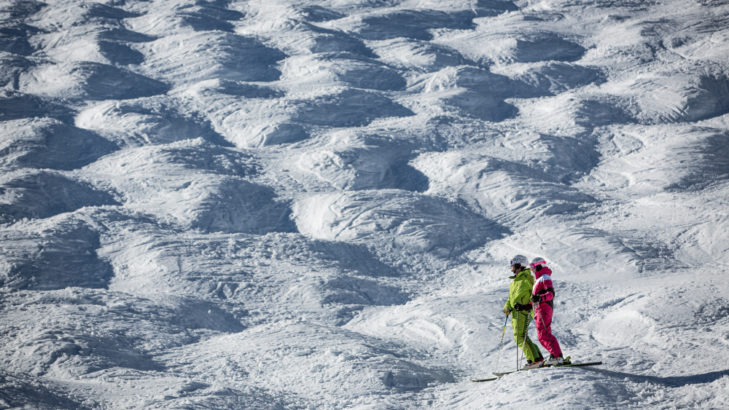 © Dachstein West
Part of the history of skiing: At the end of the 20th century, skiing on moguls became an Olympic discipline.

For a very long time people have been moving on two boards through or over the snow, but skiing has long ceased to be a means to an end. The competitions in the different disciplines are followed worldwide with enthusiast, and also as a leisure sport skiing is more popular than ever. Winter tourism is booming and is of great economic importance in some areas such as Switzerland and Austria. In France, numerous villages have even been founded for winter tourism. However, winter sports enthusiasts not only find multi-faceted ski regions in the Alps. In the meantime, there are countless ski resorts all over the world. Also in Australia, New Zealand, the USA, Canada, Japan, Sicily as well as in the South American Andean countries Chile and Argentina, snow lovers have the opportunity to ski down white slopes. 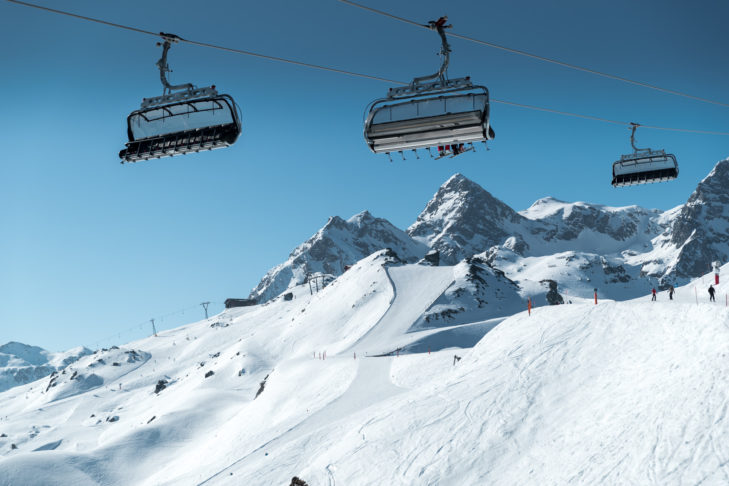 © TravelTrex
Modern lifts are now standard in most ski areas.

Skiing has become an incredibly diverse sport: Freeski, carving, freestyle, skicross etc. The list seems endless. If snow lovers want to conquer a slope that cannot be reached by lift, there is now even the possibility of being dropped by a helicopter on untouched mountain peaks. The pioneers of skiing in the 19th century would probably never have thought this possible. The offer for ski lovers today is incredibly varied and there is something for everyone. It is not for nothing that skiing is one of the most popular sports, especially in Europe. From Norway to the Alps, from Telemark to carving ski – over time skiing has evolved steadily. Let’s see how the history of skiing continues…