Holidays & Winter Sports Having a nosebleed in your ski holiday – How does it happen? What can you do?

Having a nosebleed in your ski holiday – How does it happen? What can you do?

Doesn’t this sound familiar? – It is a completely normal situation in your ski holiday, like strapping on your skis or during your break in a mountain hut, and all of a sudden you get a nosebleed? We have some advice on what to do against it. 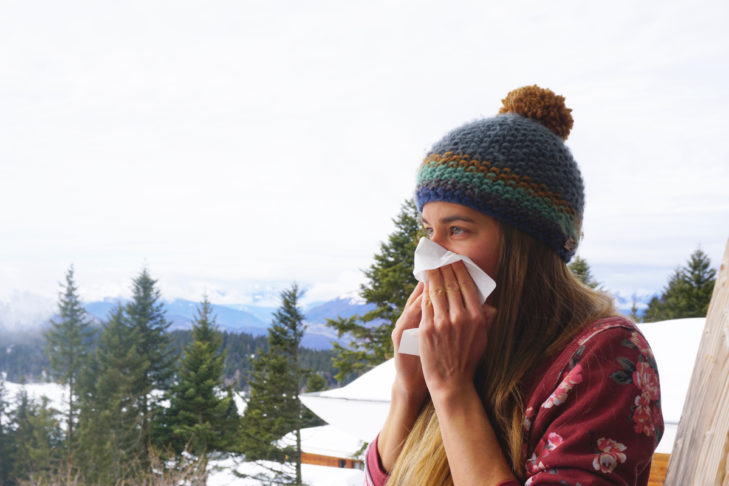 © TravelTrex
Nosebleeds look worse than they actually are.
Index
Stay at ease!What can you do to avoid nosebleeds?

The occurrence of nosebleeds in the ski holiday is not a rarity, and can easily be explained: the higher the altitude, the lower the air pressure, which leads to such a large difference in pressure that the sensitive veins inside the nose burst. The risk of tearing is mainly enforced by dry air from the heater, which often occurs in the strong cold. In general, the very dry and cold air in the mountain is straining for the nasal mucosa. They dry out faster and are especially sensitive towards changes in the air pressure. Like this, even blowing your nose strongly can cause a blood vessel to burst, and you end up with a nosebleed. © TravelTrex
While nose bleeds during your ski holiday may be unpleasant, they’re generally nothing to worry about.

What can you do to avoid nosebleeds?

A nosebleed has never killed anybody. Many people suffer from nosebleeds, the phenomenon that’s called “epistaxis” in medical jargon. In most cases it is caused by a local injury of the nasal mucosa, against which you’re best protected by preventive means. Moisturise your nose with suitable fatty ointments or special nasal ointments from the pharmacy, ideally on a daily basis. Contrary to the common belief, nasal sprays do not help against dry mucosa and only sting unnecessarily when the inside of the nose is chapped. Rather than that you should try to avoid strongly heated rooms or only stay there shortly. Carefully blowing one’s nose or only dabbing it can avoid the bursting of blood vessels. The only thing you can do against air pressure sensitivity is trying to get used to differences in pressure. What’s also important is that every nose reacts differently to high air pressure, which means that a nosebleed does not occur inevitably.

When you follow this advice you should be able to avoid sudden nosebleeds on the piste. Should it occur nonetheless, stay at ease. One cannot bleed to death from a local nosebleed. Keep your upper body upright and make sure that not too much blood runs down your throat. Especially avoid swallowing blood. Press your nasal wings tightly with two fingers in order to stop the blood flow. Usually it stops after a few minutes. In this sense: we hope your nose stays fine!