Skiing in April: Season finale in the ski resorts

Long days, mild temperatures, lots of sunshine – the Alps are full of spring. And it comes packed with wonderful sunny days on the mountain, butter soft firn descents and lots of party fun. Accordingly, there is still a lot going on in the ski areas in April. SnowTrex shows where skiing is possible in April.

The ideal spot for skiing in April also marks the highest ski resort in Europe: Val Thorens. It lies at 2,300 m and is surrounded by the vast slopes of the huge 3 Vallées. Thanks to the pistes being located at up to 3,230 m, the ski area is extremely snow-reliable. In the last weeks before the official end of the season there is still a lot going on – both in and outside the slopes. The end of the season is traditionally celebrated with the “Apotheose Days”. These “divine ski days” are three days full of of sporting activities, live music, children’s entertainment and street art. At the end of April, the “Dutch Week” also takes place, with concerts, ski tests and après-ski parties. With these and more event highlights, Val Thorens lives up to its reputation as an event centre with a varied programme of activities.

The Paradiski ski region includes the winter sports areas of La Plagne and Les Arcs/Peisey-Vallandry, thereby encompassing two glaciers. You can expect optimal conditions for skiing in April, and the countless and varied glacier slopes located at up to 3,200 m leave nothing to be desired.

Only about 100 km away from the Côte d’Azur and still snow-reliable in April – that’s the Alpe d’Huez ski area in a nutshell. Against the backdrop of the 3,330 m high Pic Blanc, experienced winter sports enthusiasts in particular can enjoy the black pistes such as the 16 km long “Sarenne”. Another plus: the ski area is located on the south side of the “Massif de Grandes Rousse”, promising many hours of sunshine, especially in April.

The ski resort of Tignes is also situated in the French Northern Alps at a snow-sure altitude. Here, below the Grande Motte (3,656 m), glacier skiing in April is a true delight. The season always ends at the end of April/beginning of May, but shortly thereafter, the summer season starts! Then, about 20 km of pistes – and usually the snowpark – are open at the top of the glacier.

© Andy Parant
The sun terraces in Tignes are popular in April.

At a maximum altitude of just under 3,600 m, the Les 2 Alpes ski area is one of the highest in the world. The Mont-de-Lans glacier therefore has excellent piste conditions even in April. And there is no end to the extensive skiing pleasure, as the glacier ski area remains open during summer.

Another snow-reliable ski area in France is Chamrousse. Located on the western edge of the Alps, the region enjoys frequent snowfall thanks to its geographical location. Skiers can look forward to a total of 90 kilometres of pistes at altitudes of up to 2,250 metres.

In addition to the above-mentioned ski areas, Val Cenis, Valfréjus, Valmeinier, La Joue du Loup, Chamonix-Mont Blanc and, of course, the ski region of Les Sybelles around Saint Sorlin are all wonderful places to ski in April.

The large glaciers in Austria with pistes at an altitude of over 3,000 m offer skiing fun well into spring. In Tyrol alone, there are five glacier ski areas with many kilometres of pistes for sunshine skiing: the Stubaier, Kaunertaler, Pitztaler and Hintertuxer glaciers as well as the Rettenbach and Tiefenbach glaciers in Sölden. The mountain station of the Wildspitzbahn at the Pitztaler Glacier.

In the Pitztaler Glacier ski area, you will ski on the highest glacier in Tyrol (3,440 m). Up here, in addition to skiing, a visit to the Café “3.440 m”, a high-altitude confectionery with coffee machines and taps specially designed for the high altitudes, is a must.

The ski area on the Hintertux glacier is open all year round. Austria’s only year-round ski area reaches altitudes of up to 3,250 m and is open 365 days a year, albeit with different piste lengths. There are a total of 60 kilometres of pistes and 20 lifts in the area, which can be completely operated into May if the snow conditions are good. Over the summer these are then reduced to 22 km of piste and 10 lifts. Hintertux is a place for guaranteed fun in April, also besides winter sports. The glacier hosts several events for spring skiing. The “Kölsche Woche” with live concerts, early shopping and fun races are just a few examples. Next up after that are the “Flower Pow(d)er Weeks”, offering workshops, ski tests, early bird skiing, snow-grooming skiing and yoga brunches. 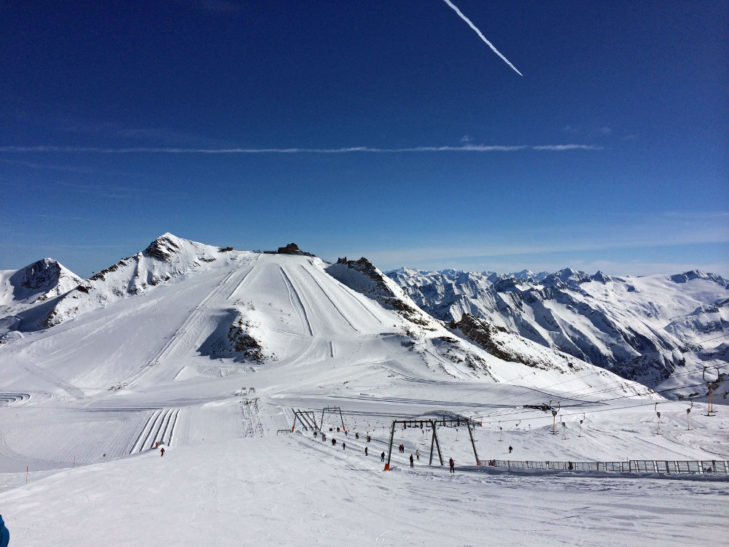 The Olperer lifts at Hintertuxer Gletscher in front of the so-called “Frozen Wall”.

On Styria’s highest mountain, the Dachstein Glacier, winter sports enthusiasts can also expect a wide range of activities by the end of April. In addition to skiing and snowboarding, ski tours, cross-country skiing and freeriding is possible in the Schladming-Dachstein glacier ski area.

The only glacier ski area in the Salzburger Land is the Kitzsteinhorn ski area near Zell am See-Kaprun. Modern lifts bring winter sports enthusiasts to the natural snow paradise from October to May. Most of the pistes are located at altitudes of between 3,059 m and 2,000 m, such as the infamous “Black Mamba” slope with an inclination of up to 63%. Top quality snow at Kitzsteinhorn. 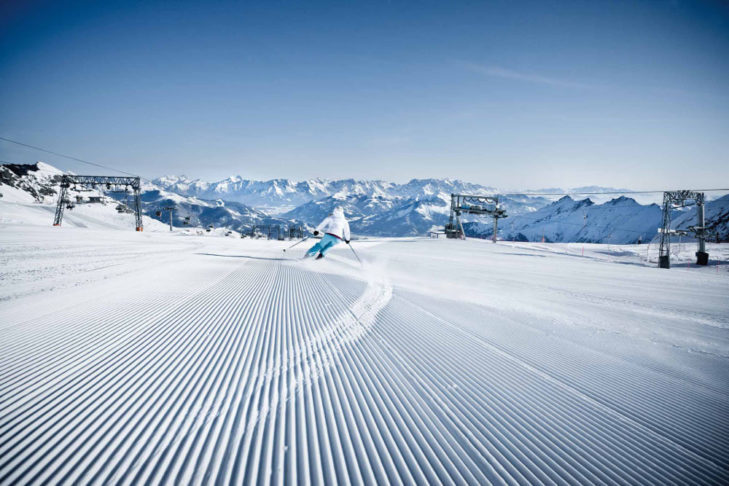 The Mölltaler Glacier ski area stands out due to its unique position as the only ski area in Carinthia to be open 330 days a year.

Apart from the glacier ski resorts, there are of course other ski resorts in Austria highly suitable for a spring ski holiday – for example the resorts of Zillertal, Brixental, around Saalbach, around Ischgl or around Kitzbühel.

Many ski resorts in the Dolomites are open until April. Kronplatz, Obereggen and the Drei Zinnen, for example, are open until mid-April, while in the Eisacktal and Tauferer Arnthal the lifts run partly until the end of April.

If you want to be on the safe side when it comes to snow reliability, the Schnalstal Glacier is recommended. The motto here is quality over quantity! The ski area has a total of 27,2 kilometres of pistes, but beginners and advanced skiers alike can find suitable pistes here. Its altitude of 3,212 m provides optimal conditions.

Normally, the Ortler area near Sulden is open until May. One of the largest cable cars in the Alps takes winter sports enthusiasts to this varied paradise of snow, sun and fun. Guaranteed snow! Sunny descent in the Sulden am Ortler ski area.

Ski areas in Switzerland that are particularly suitable for skiing in April include Engelberg-Titlis, Zermatt, Flims-Laax-Falera and Saas-Fee. In Engelberg-Titlis you will be skiing at up to 3,020 m above sea level. The world’s first rotating cableway awaits winter sports enthusiasts in the ski area: the “Titlis Rotair” cabin rotates 360 degrees during the ride.

With its almost 4,000 metres above sea level, Zermatt is the highest ski area in the Alps. And that’s not all. Zermatt is also home to the highest lift station in Europe and the highest 3S cable car in the world. These great conditions help make skiing on the impressive Matterhorn possible all year round. Sun skiing against the backdrop of the Matterhorn in Zermatt. 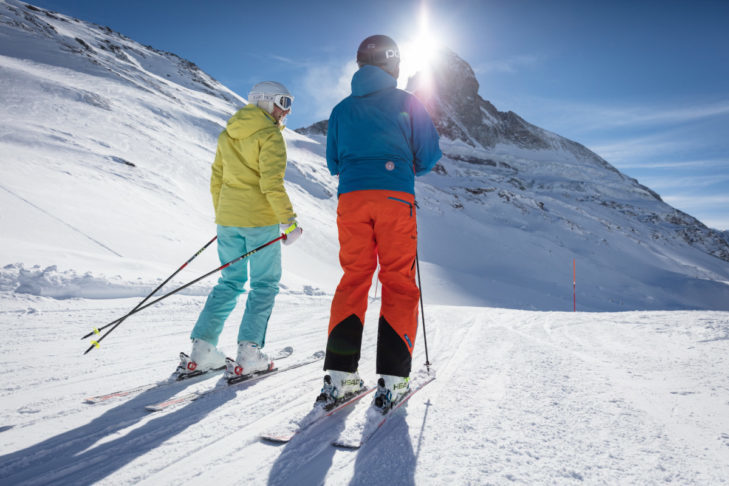 © Pascal Gertschen
Sunshine skiing in front of the silhouette of Matterhorn in Zermatt.

Wonderful snow conditions await winter sports enthusiasts in the Flims-Laax-Falera ski area. At over 3,000 metres above sea level, you can make perfect turns in the fresh powder snow in April. The longest descent starts at the glacier and continues 17 km down the mountain. Many hours of sunshine round off the ideal skiing day.

In Saas-Fee, winter sports enthusiasts can look forward to a glacier ski area with around 100 kilometres of piste. The “Metro Alpin”, the world’s highest underground funicular railway, takes you up to the top. The Saas Valley is known for its abundant snowfall, especially in spring, so not only in Saas-Fee, but also in Saas-Grund and Saas-Almagell pure skiing pleasure awaits fans of sunny skiing in April. 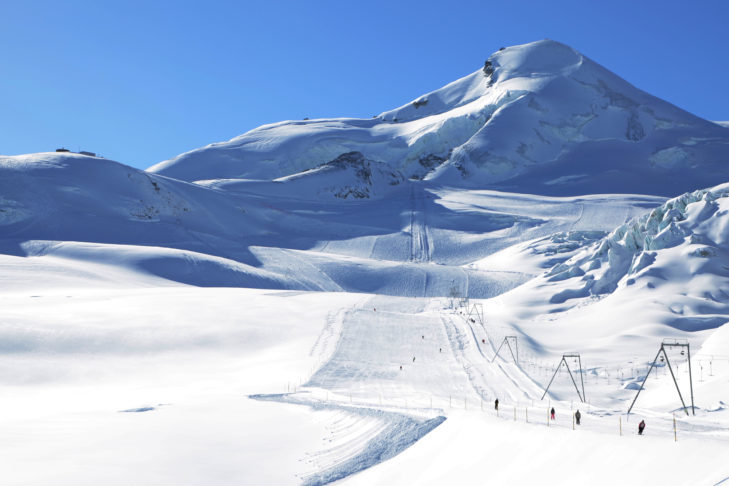 In which of the spring ski resorts you choose to enjoy the sun and snow is your decision. Sufficient snow, great slopes and fabulous panoramic views await you anywhere you go. And if you still haven’t had enough of winter sports in spring, you should take a look at the ski resorts where summer skiing is possible.