Holidays & Winter Sports Skiing technique – Part 2: How to ski on a steep piste

Skiing technique – Part 2: How to ski on a steep piste

A big part of skiing is about technique and tactics. SnowTrex discussed this complex issue with Max Holzmann, chief instructor at the German Ski Instructors Association (Deutscher Skilehrerverband, DSLV). In part 2 of our series, the state approved ski instructor gives expert advice on how to ski a steep piste safely.

One of the most difficult types of piste is the steep piste. Mainly classified as black or at least deep red, a steep piste with a sharp gradient requires a safe and accurate skiing style combined with a good body balance and ski control. Those who have already stood at the top of pistes like Harakiri in Mayrhofen or Diretissima at Katschberg and have looked down the steep slope know the feeling of nervousness and apprehension spreading.  In times like this, it’s completely fine and even good to have the necessary respect for the steep slope. However, respect must not turn into fear, as a steep piste cannot be mastered with too much fear and hesitation. Reassuringly, the skiing technique on steep pistes is the same as on flatter ones. There are only a few things to keep in mind. Above all, this concerns control of speed.

On a steep piste, it’s better to start riding slowly and then speed up. After a fast start it’s hard to reduce the speed again. “The downhill force on a steep slope is the strongest”, DSLV expert Holzmann explains. “Studies prove that a piste with a 45 degree gradient is so steep that the rate of fall is almost as high as in free fall. This is why the main focus when skiing steep pistes is on controlling one’s speed. One must not get too fast and should always ski with speed reserves. On a steep piste, the highest risk potential is not being able to stop when falling“. Just like on any other piste, it’s important to find the right speed that allows you enter a turn safely.

Fast changes of direction, high pressure on the edges

Once you’ve succeeded to start into the slope at a moderate speed, the next step is to ride neat turns. The trick is quickly turning the skis over the fall line and keeping continuous pressure on the outer ski. The moment where there is no pressure on the edges in the turn should be as short as possible. “It’s important to ride in short turns and fast changes of directions, as both automatically reduce speed”, Holzmann advises. “The skis should be turned actively and even brought into drifting, rather than carving on the edges in larger bends. This is because a drifting ski in short turns has a better brake effect than in larger bends.” The higher pressure is always on the outer ski.

© IM photo – shutterstock.de
A good amount of pressure on the edges controls the speed and turning behaviour.

The best is to turn over the edge and keep a continuously high pressure on the skis. Those who want to practise this technique can, for example, try to stand on a flatter piste crossways to the slope and then slide down. Press the knees toward the slope in order to stand on the edges more noticeably. The more running surface is visible from under the skis the better – this means that the edge has a good grip on the snow.

Once the first turns succeeded, the next one awaits. Drifting on the edge for too long easily turns into endless sideways sliding. When coming from one turn into the other, a quick build-up of pressure is also important. This can only be reached through a forward movement, which often needs a bit of courage. However, it’s an effective aid when trying to control the skis in regards to speed and steering.

Steep pistes demand respect, but they do not have to be frightening. Not starting into the slope too fast, but finding the appropriate speed instead helps in finding a safe track. Confident, quick changes of direction over the fall line, good pressure on the edges in short turns, and shifting one’s weight forward create the necessary control. With this technique, good body tension, and the highest focus possible, even the steepest piste can be conquered. 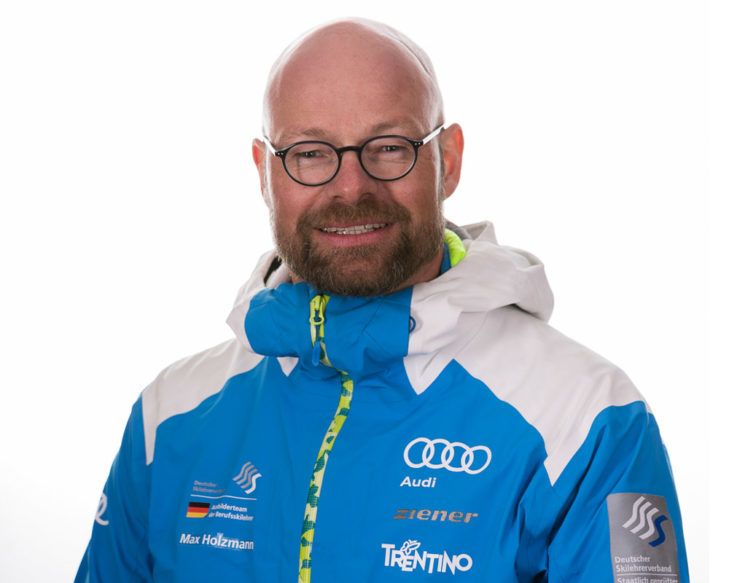 Max Holzmann is a state approved ski instructor and executive board of professional training in the German Ski Teacher Association (Deutscher Skilehrerverband, DSLV). His areas of responsibility are the contents of training courses, the respective assessment levels and levels of difficulty in all training stages from level 1 to the state approved ski instructor exam in the disciplines motor skills, methodology, and theory.