Yoga for Skiers and Snowboarders

If you stay fit during the summer, you will enjoy winter sports even more during the winter. SnowTrex has some practical yoga tips for winter sports fans – with these exercises, you can become fit for the piste and also look great on skis and snowboards. 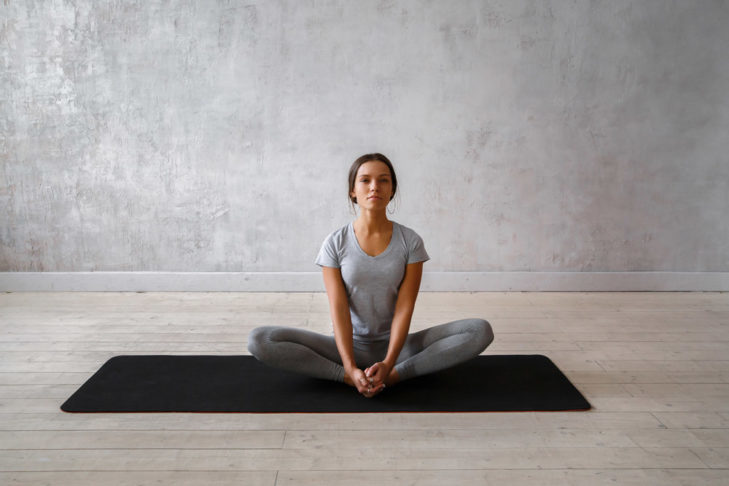 © Evgeny Glazunov - Shutterstock.de
Yoga can be a perfect complementary element for athletes.
Index
Yoga and Winter Sports?What is Yoga?Benefits for Winter Sports Fans

The spiritual teachings from a warm India and the fast-paced winter sports of skiing and snowboarding in the cold – at first, the two seem to have nothing in common. However, this combination is quite complementary despite many prejudices.

In fact, more and more competitive and amateur athletes are excited about using yoga as a supplement to their training. The importance of developing an awareness of one’s own body has become firmly established in people’s minds. Yoga can play an important role in this. For competitive athletes in particular, kinesiotherapy, which originated in India, has become an alternative to increasing physical and mental fitness.

Skiing and snowboarding are complex sports that require mobility, involve flowing movements and place high demands on balance. In addition, mental components, especially the ability to concentrate over a long period of time and an extremely high level of concentration in dangerous situations, influence the safe, controlled skiing style of the winter sportsman and help to prevent injuries. These requirements can be better met by yoga exercises. Yoga helps to balance physical imbalances, improve mobility and specific strength, improve concentration and become a better skier or snowboarder. Yoga is also said to strengthen the immune system, relax the muscles and increase stress resistance.

Yoga teachings have their origins in Hinduism and parts of Buddhism and originated several centuries before Christ in India. The philosophical teaching is based on a holistic approach: the harmony of body, soul and spirit. Originally, yoga was the search for enlightenment through meditation and was therefore only a spiritual path. In the course of time, the positive effect of physical exercise was recognised and with it, the sporting aspect became part of yoga teaching.

Yoga exercises, the so-called asanas, continued to develop and gained in importance. Not only strength, flexibility, balance and muscle endurance are trained, but also blood circulation and well-being are improved. In the meantime, many different forms of yoga have been established with different emphases. Today, the number of asanas and their variants are even in the five-digit range. It is important that the exercises are carried out carefully, especially at the beginning. Stretches should be held between 10 and 30 seconds, later 60 seconds, so that the individual stretching limit is reached, but no pain is felt.

The teachings from India have their meaning even in the cold winter. For athletes, yoga can mean an increase in performance both physically and mentally. Yoga, in its dynamic form, regenerates and vitalizes the body and mind, and energy is built up and held in the body. Not to be ignored is the injury prevention through stronger and more flexible muscles, tendons and ligaments.

Many athletes train their muscles too one-sided, and the framework of stabilizing deep muscles is often forgotten. The dynamic yoga forms like ashtanga train these small muscle groups. Ashtanga yoga is athletically challenging, the body is kept in motion by a special breathing technique.

The mental component is often neglected in athletes, although everyone at least knows that the “head” plays an enormous role in competition. Many professionals work with mental coaches. However, yoga can also achieve great success on this level. Balance, the ability to relax, the increase in concentration, the handling and elimination of anxiety and stress can all be wonderfully controlled. Accidents can also be avoided by improving the ability to concentrate.

Which Yoga Exercises are Particularly Suitable for Winter Sports Fans?

Too weak a musculature tires quickly and, after a certain time on the piste, is no longer able to compensate for the shocks or bumps. The constant alternation of slopes and bends while skiing puts strain on the hip flexor and shortens it quickly if no counteraction is taken. Asanas are therefore particularly important for the stretching and flexibility of the hips. A flexible hip promotes leg movement on skis and boards.

It is no secret that balance plays a central role in skiing and snowboarding. When skiing, the body’s centre of gravity should be centrally above the ski, often inexperienced or anxious skiers shift their centre of gravity too far back and lose control. In order to train balance, it is essential to focus on the centre of the body. The center of the body should be trained accordingly and the abdomen and back should be strengthened.

In order to make winter sports fans fit for the snow, SnowTrex has selected particularly effective asanas to strengthen muscles and improve balance. With this preparation, your ski holiday will be relaxing for your body, mind and soul and even more fun!

Looking forward, feet standing straight next to each other on the ground, imagine an axis running through the middle of the second toe and the middle of the heel, feet pressing into the ground, toes briefly raised and spread, body weight distributed evenly over the three support points of both feet, big toe ball, small toe ball and heel. The thigh and shin are rotated slightly inwards. The pelvis is slightly tilted forward, the knees slightly flexed, the abdomen slightly retracted and the shoulders loosely dropped back and down. The gaze is relaxed and turned forward, while concentration is directed towards the centre. 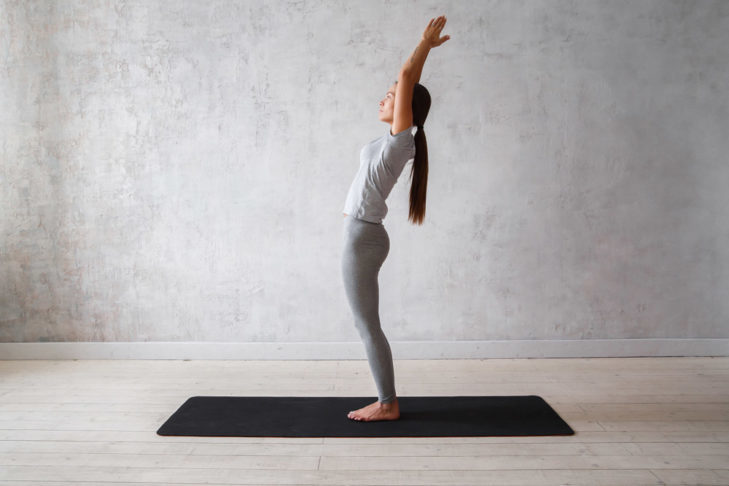 © Evgeny Glazunov - Shutterstock.de
Firm as a mountain: Tadasana, an upright posture with an elongated back, is the starting point for many yoga exercises.

The chair pose is a great exercise for skiers in particular. Starting from the Tadasana, the legs are bent slightly, the feet stand slightly wider in the hip-width position with even foot pressure. The pelvis is above the heels, the hips are flexed and the upper body is upright. The pelvis is lowered as if you were sitting on a chair, your arms stretched forward or lifted upwards. The shins can now be pushed forward as if they were pressed against the ski boot shaft at the front. The view is directed forwards or upwards in the direction of the hands. The palms of the hands point inwards. 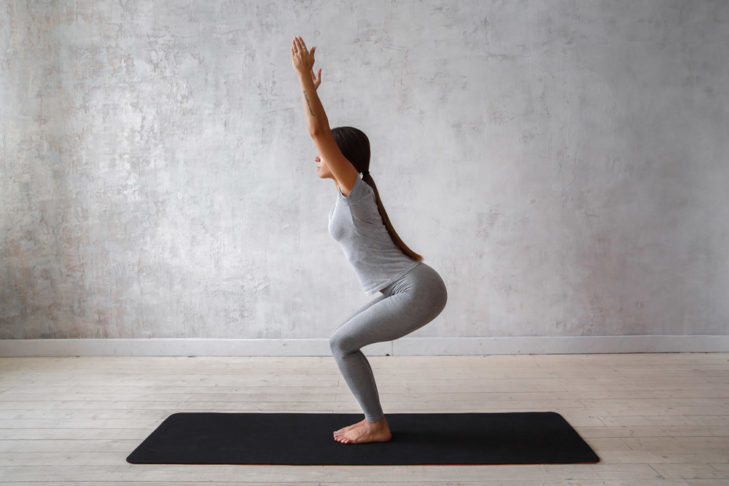 © Evgeny Glazunov - Shutterstock.de
The chair pose prepares for the position on skis with bent knees and thus strengthens the leg and buttocks muscles that support the knees.

While seated or even from a straight position (mountain pose), the arms are stretched parallel upwards. Then the hip is stretched far forward and the belly is pulled towards the thigh, the arms are carried along. It is important that the movement comes from the hip. Depending on the mobility of the back and the back muscles of the legs, the upper body is bent further with a straight back, but only as long as it can be held straight. 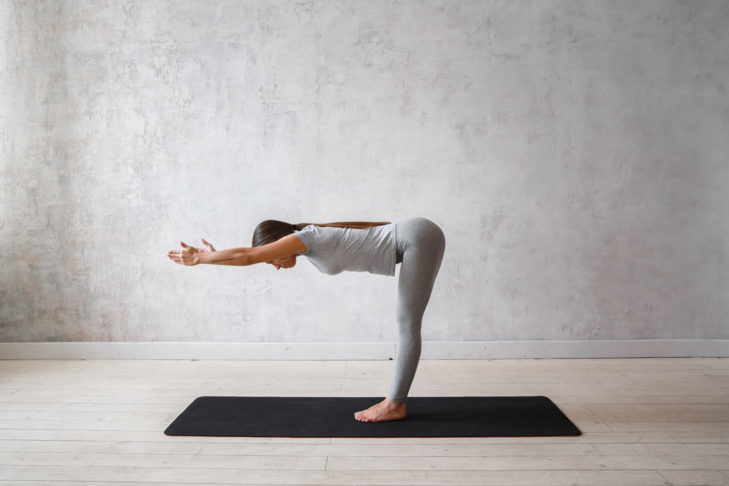 Virabhadrasana I (Warrior I Pose)

Starting from the mountain pose, a lunge step is taken. The arms point to the sky, the palms point inwards. Look forward or upwards in the direction of the hands. The front knee is positioned above the heel so that a right angle is created between the lower and upper thigh. The heels are on a line with the rear foot rotated outwards. Alternatively, the toes remain in line with the front foot without rotation, lifting the heel slightly if necessary. The front foot, on the other hand, rests completely on the ground. 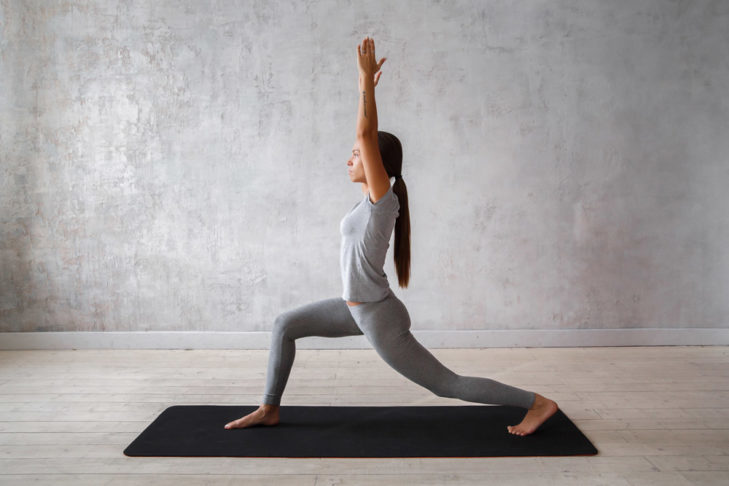 © Evgeny Glazunov - Shutterstock.de
The Warrior I serves to make the hips more flexible, opens the chest and builds up strength in the legs. 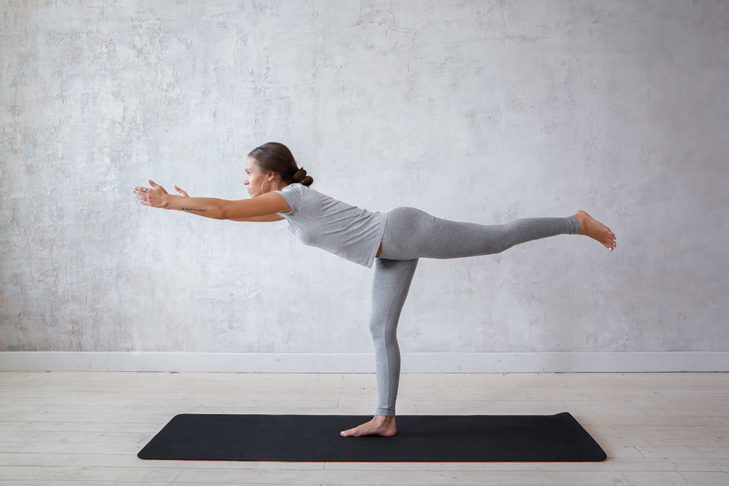 © Evgeny Glazunov - Shutterstock.de
The Warrior III is a super balance & full body exercise and strengthens the abdominal muscles as well as the back, legs, shoulders and arms.

This asana is reminiscent of the standing scale. The starting position is the mountain pose or the warrior I, one leg leaves the ground and is pushed backwards, while the upper body bends forward. Foot and leg muscles are activated. The spine should be straight and legs, arms and head ideally horizontal. The arms move forward and become part of the line of leg and upper body, the abdomen is also under tension. It is now challenging to keep the balance a few breaths. 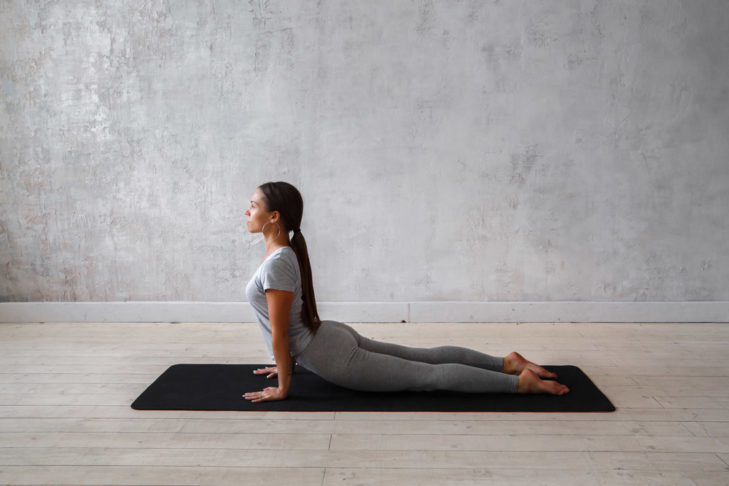 © Evgeny Glazunov - Shutterstock.de
The cobra strengthens and relaxes the back while simultaneously stretching the stomach, lungs, shoulders, chest and spinal column.

The legs are stretched while the heels try to reach the ground. The buttocks are pushed upwards. It is important that the back stays straight. Upper arms and ears are at the same height, arms and head form a line with the upper body. The view leads downwards in the direction of the feet. This exercise even helps against tension and headaches because the spine and neck are stretched. Snowboarders in particular will benefit from the stretching and strengthening of the Achilles tendon.

© Evgeny Glazunov - Shutterstock.de
The downward-facing dog provides for strong arms, wrists, an extension of the Achilles tendon, the back leg muscles and the lower back and stretches the shoulder blades.

Starting from the mountain pose, one leg is placed far back. The front foot points forward, the legs are stretched out. The shoulders remain relaxed, the upper body is bent far forward with a long back. The front arm leads to the floor and is supported next to the front foot. If you are not flexible enough, you can hold the lower leg with your hand. The counter arm leads in a line upwards, the gaze is directed to the upper arm. It is important that the back remains long and that the hip is at the side of the yoga mat. 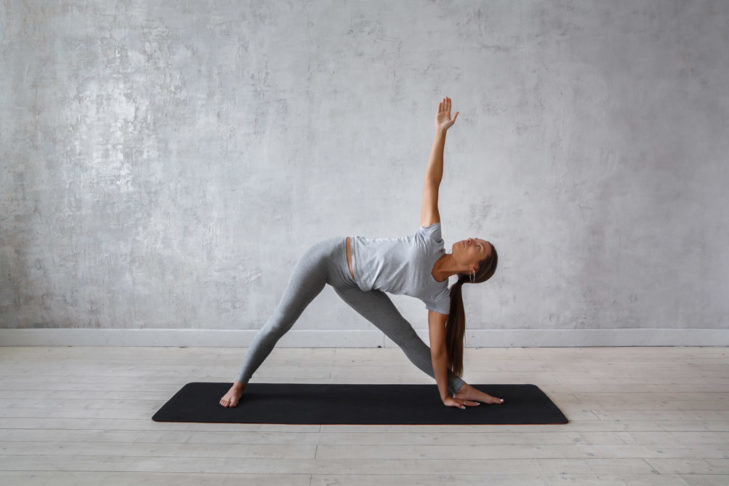 © Evgeny Glazunov - Shutterstock.de
The triangle strengthens the thigh muscles and makes the hip joints more flexible, stretches the back and hip muscles, thighs and calves.