Ski Areas Following in the Footsteps of the Pros: Famous and Infamous World Cup pistes

Following in the Footsteps of the Pros: Famous and Infamous World Cup pistes

Every year in autumn, the elite of skiing starts into the World Cup circus. The pistes that the racing pros race down are considered a “test of courage” for every ambitious hobby winter sportsman. SnowTrex has put together the most famous and infamous World Cup pistes, which are also suitable for non-professionals. Who dares to conquer one of these pistes?

The Lauberhorn slope in the World Cup resort of Wengen is the longest course in the World Cup with just under 4.5 km. In 2013 Johan Clarey reached 161.9 km/h at Hanneggschuss, the highest speed ever measured in the Alpine World Cup. The maximum gradient of 42 percent, however, is not as high as on other tracks. The hallmark of the piste in front of the spectacular backdrop of the Eiger north face is the legendary narrow pass at Hundskopf, where it goes 15 m deep between two rocks. Further infamous passages are the Minschkante, the Canadian Corner and the Finish-S, which demands everything from the riders at the end of the route.

The World Cup track below the Langkofel is infamous for its “camel humps”, one of the most famous sections in the entire World Cup. The combination of three bumps, originally called “jump of the kangaroo”, is located approximately in the middle of the piste. Especially the second and third jumps are difficult to manage. After the camel humps, the furrows of the Ciaslat meadow challenge the thigh muscles of the skiers. And even after crossing the finish line, concentration is still called for: the run-out is particularly narrow. In the early years underdogs with high starting numbers on the Saslong had the advantage: In the afternoon the sun comes out behind the Langkofel and makes the track faster. By shifting the starting times, however, this problem has now been solved. 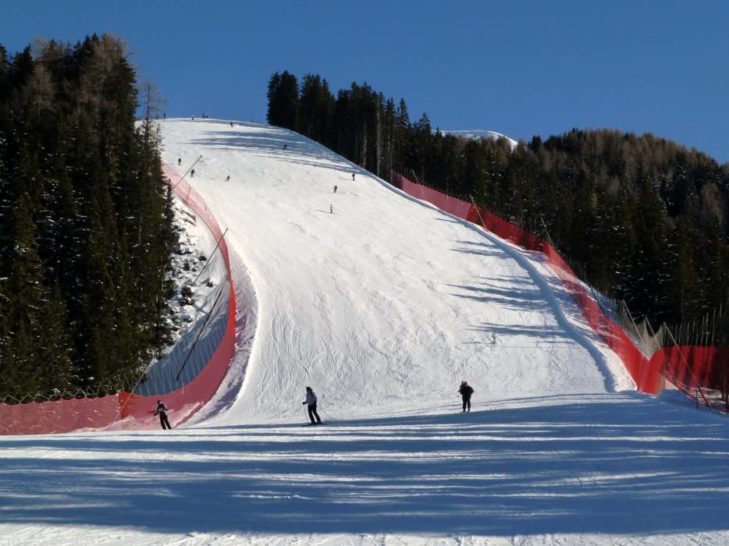 © skiresort.de
View on a section of the Saslong in Val Gardena.

It is probably one of the best-known tracks – not only because of the celebrity crowd that rules every year when Kitzbühel invites you to the Hahnenkamm race. And it is definitely one of the most feared. Up to 85 % gradient, up to 80 m wide jumps, top speeds up to 140 km/h – the Hahnenkamm Race is one of the hardest in the world. The 3,312 m long Streif has all the elements of a classic descent: sharp terrain edges, steep slopes, diagonal runs, shooting and gliding sections, bends, spectacular bumps, short uphill passages. The “Mausefalle” with a gradient of 85 %, the steep slope and the “Hausbergkante” are regarded as critical sections. Normal skiers can bypass them just like the other two – they are marked as “extreme ski routes” in normal ski operations. The red “Streif-Familienabfahrt” runs around it. A chance for everyone to get a taste of some World Cup air.

Schladming’s local mountain, the Planai, has been on everyone’s lips for many years as a World Cup venue. Because it is the “night race” there that attracts the most spectators in the entire World Cup every year: Up to 60,000 people transform the area around the finish into a sea of colours. After the last World Cup race had taken place here in 1990, Schladming returned to the racing calendar in 1997. Since 2001 the night race always takes place on Tuesday after the Hahnenkamm race. Course sections like the “Holzacker” or the “Italienerloch” live up to their name. 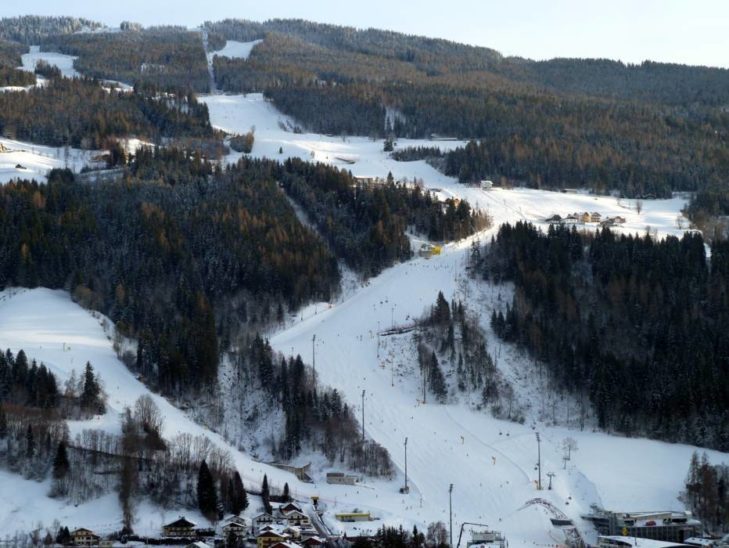 © skiresort.de
The “Nightrace” always takes place on the Planai in Schladming.

The legendary Kandahar has been part of the World Cup courses since 2009 and has the steepest section of all World Cup descents: With up to an incredible 92 percent gradient, the ski racing pros have to get back to work shortly before the finish. No wonder that this section of the course bears the name “free fall”. And the other sections are also very tough: on the Trög slope there is a 63 percent gradient, which allows accelerations of up to 140 km/h shortly after the start. The route continues over the Olympic curve, the panorama jump – jumps of up to 60 m are the order of the day – and the ice slope. Nothing for weak nerves and thighs! 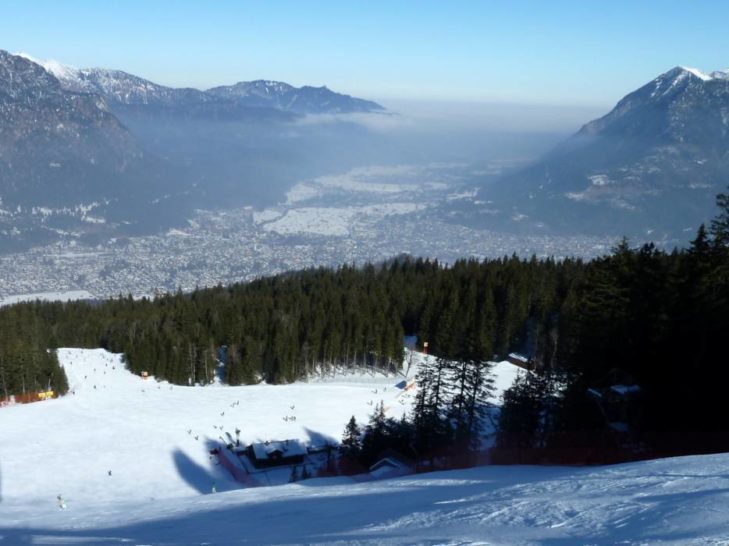 The giant slalom at Chuenisbärgli above Adelboden is considered one of the most difficult in the world – and a classic. Apart from Adelboden, only Kitzbühel and Wengen have been on the event calendar every year since the start of the World Cup in 1967. Around 40,000 visitors storm the 3,500-population town every time. The start and finish slopes are particularly steep and the runway is sloping. On Adelboden’s local mountain there are several different track variants available: for World Cup races, but also for European Cup and other FIS events.

In spite of all the speed one can show on the Olympic descent in Cortina d’Ampezzo, one should not miss the view here. The route is located in the UNESCO World Heritage Region of the Dolomites and offers breathtaking views due to its sunny location. It is one of the most beautiful and popular courses of the World Cup. The ski racing pros start at an altitude of around 2,300 m directly below the triumvirate of Tofane. “Slowly getting started” is no option – shortly after the start, they go straight to the Tonalen Schuss, where they can reach speeds of up to 130 km/h. 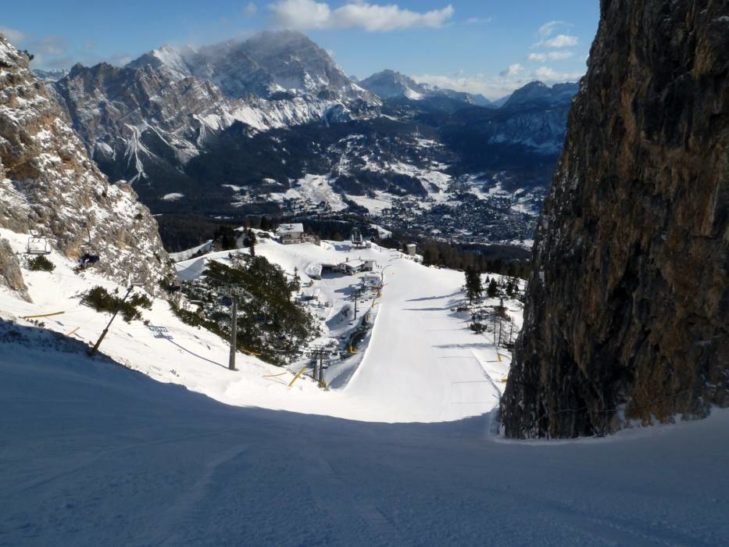 Steep, fast, winding – that’s the Pista Stelvio in Italy’s Bormio. Usually shortly before the turn of the year the men hold their World Cup race here. “La Stelvio”, as the Italians call it, is loved and hated because it forgives absolutely nothing. The start is already breathtaking: With 63 percent gradient, the starting signal is the steepest in the competition. Two fast corners lead directly to the Rocca jump at the beginning. The decisive section of the track is the Carcentina traverse, the fastest of the San Pietro shot, which is initiated by the San Pietro jump.

The ski racers on the Gran Risa in Alta Badia do not have much to laugh about, as the Italian name of this route suggests. The whole length of the slope leads through a path in the pine forest. Due to the location in the shade, the track usually resembles an ice plate. Since 1990 Alta Badia has been an annual World Cup venue. The record winner here is Marcel Hirscher.

The track was named after the French skiing legends Henri Oreiller and Jean-Claude Killy. The O.-K. slope is certainly not one of the most demanding, but along with the Saslong, the Lauberhorn downhill run, the Streif and the Kandahar it is one of the classics in the World Cup. It was designed for the Olympic Games in 1992. Today only the women’s competitions take place here. The men ride on the “Face de Bellevarde”. Since 1968/69, the “criterion of the first snow” – the name of the annual race in Val d’Isère – has belonged to the World Cup.

Did you get respect? Don’t worry. Often it is the routing and preparation that make the World Cup courses so treacherous. In normal condition they are also accessible for hobby athletes. They can now go on their own World Cup tour and enjoy the tracks as they please without having to stick to the World Cup disciplines.