The Most Beautiful Forest slopes – Piste Tips for Nature-Lovers

Skiing below the tree line has its own charm. Forest runs provide a varied terrain as fairytale slopes for children, long valley runs for connoisseurs or a varied obstacle course for deep snow fans. SnowTrex has located the ski areas with the most beautiful forest runs.

A real highlight among the wooded slopes is the Mutterer Alm in the Olympia SkiWorld Innsbruck. The demanding Götzner run was the substitute run for the 1964 and 1976 Olympic Games and is one of the most beautiful runs in Austria. The red piste leads over a good 4 km from Nockspitze down to Götzens.

© Skiresort
The Götzner run is one of the most beautiful slopes in Austria.

In the freeride paradise of France, the daring like to take to the woods, away from the pistes. In the southern part of the Western Alps, there is an entire ski area that already bears the forest in its name: La Forêt Blanche. The lush larch population reaches an altitude of over 2,000 m, so that the ski area around the Vars and Risoul resorts offers numerous forest-lined slopes and interesting tree-runs for freeriders.

© Rémi Morel
Away from the slopes of La Forêt Blanche, freeriders will find great forest runs.

There are also many tree-lined runs in Eastern European ski regions. In the Klínovec ski area in the Czech Republic, for example, whose mountain of the same name borders on the Fichtelberg and the German Oberwiesenthal, six beautiful forest runs lead off on the northeastern side.

Even in the Spindler’s Mill ski area, the forest calls to winter sports fans in the form of a 4 km long forest piste with great views of the resort. Pure nature and varied pistes – the Czech Republic’s largest and best-known ski area at up to 1,235 m offers every winter sports fan the perfect skiing experience.

The 4 km long forest piste also has a beautiful view of Spindler’s Mill.

The Sölden ski area, with its two glaciers and famous après ski scene, offers a whole range of possibilities for exuberant skiing pleasure. Nature-lovers won’t be disappointed either: at the Gaislachkogel, skiers and snowboarders will find particularly forested sections at lower altitudes. Here, you can enjoy the snow and the beauty in peace!

© Skiresort
Idyllic runs in the particularly wooded sections of Sölden.

A somewhat different type of forest run with entertainment value is offered by child-friendly ski areas like the Silvapark in Galtür. There is a fairytale forest here that kids can discover along three trails. Frau Holle and other fairytale characters wave from the edge of the piste. The snow trails lead through the woods and along enchanted paths past witches and forest spirits. Even a witch’s cottage stands there, in which the witch’s resounding laughter can be heard as you pass through.

In the Obertauern ski area, the forest teaches children to be afraid in a certain way, as a genuine ghost piste leads through the trees here. The creepy path begins below the Schaidberg cable car and leads through the colourful forest spirits on tree trunks. On the ski ghost train, there is also a darkened, creepy hut to discover. 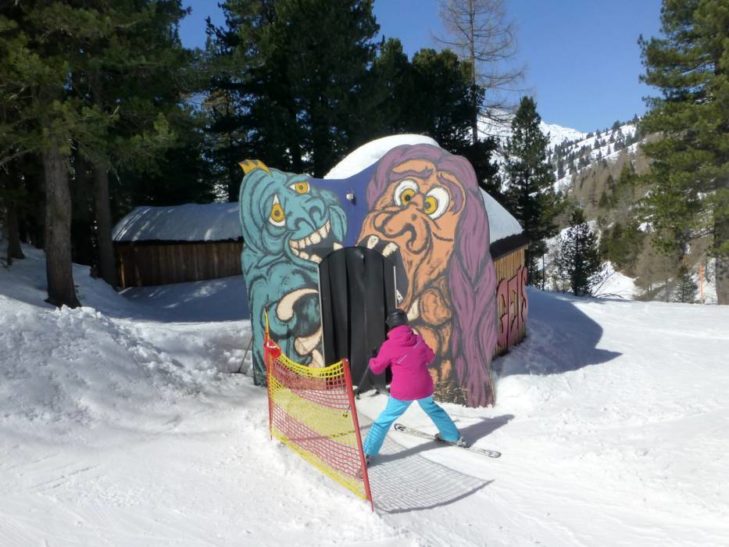 © Skiresort
It’s off to the creepy hut in the Obertauern ski area.

In the Serfaus-Fiss-Ladis ski area, skiing through the forest is an experience, especially for freeriders. The “Trailpark Waldbahn” was built above Fiss using winter-ready bike trails. In summer, mountain bikers can ride along the trail, while in winter, skiers and snowboarders can glide down. The ski trails bear resounding names like “Strada del Sole”, “Morning Glory” and “Milky Way”. For those who prefer to stay on prepared pistes, there is an attractive red forest run that goes from the top station of the Alpkopfbahn lift down to Serfaus. 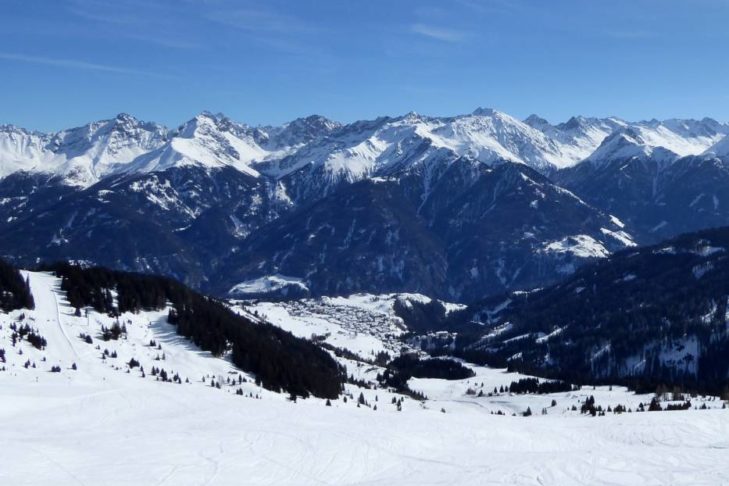 © Skiresort
Beautiful forest runs can be discovered both on and off the pistes.

9. Ski Region Paradiski: Forest Runs Down to the Village

The Paradiski ski region not only offers a wide variety of glacier pistes for all skill levels, but also offers wonderful forest runs. As the perfect end to a long day’s skiing, the routes from L’Arpette to the village are particularly beautiful. From a height of 2,385 m, the pistes meander through the forest, overcoming a difference in altitude of up to 1,000 metres.

Large parts of the 12 km long downhill run in France’s Valfréjus lead through wooded areas to the valley station. Numerous serpentines and narrow trails through the forest invite you to take short excursions into the undergrowth. Some have already taken a natural mini kicker here. On the longer flat sections, one can simply walk and look at the snow-covered scenery of the forest.

11. Ski Area Via Lattea: Forest Run along the “Milky Way”

Close to the French border and only about 100 km from Turin lies the ski area of Via Lattea (“Milky Way” in English). With 400 km of pistes, it is one of the largest interconnected ski areas in Italy and reaches an altitude of 2,800 m. Yet even at lower altitudes, winter sports fans can look forward to a true paradise: beautiful forest runs lined with larches and conifers. From easy to medium difficulty pistes there’s something for everyone and for short breaks in between, small, cosy huts invite you to stop in. 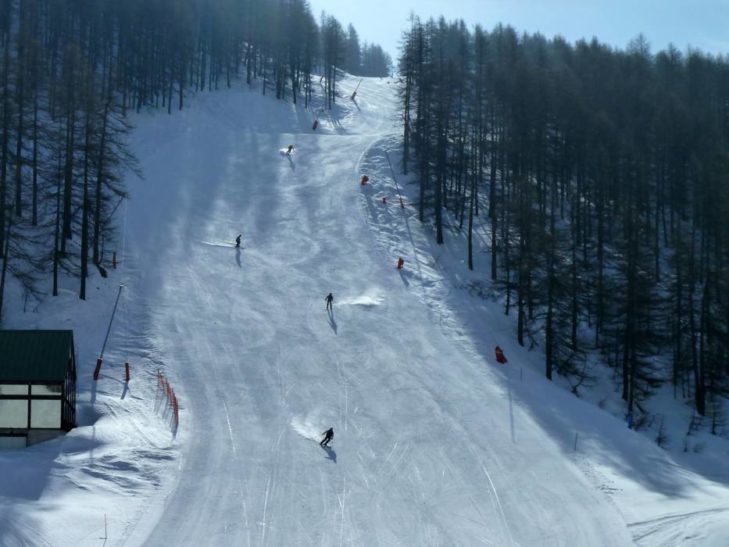 © Skiresort
One of the beautiful forest runs along the “Milky Way”.

The valley run from the Hintertux Glacier is 12 km long and lined with trees at the lower end. It starts at the very top of the glacier, passes the Tuxer-Fernerhaus, the “Unterm Eisbruch” downhill run and the Sommerbergalm and finally runs as a ski route through the forest to Hintertux.

© snowturtle - shutterstock.de
In many ski areas, downhill runs lead over wooded serpentines down to the valley, as seen here on the Hintertux Glacier.

In the Skiwelt Wilder Kaiser-Brixental, the valley resorts of Hopfgarten, Itter, Söll, Scheffau, Ellmau, Going, Brixen im Thale and Westendorf can be reached via valley runs. There are several pistes ending at the valley station in Scheffau, including a particularly curvy stretch through the forest. 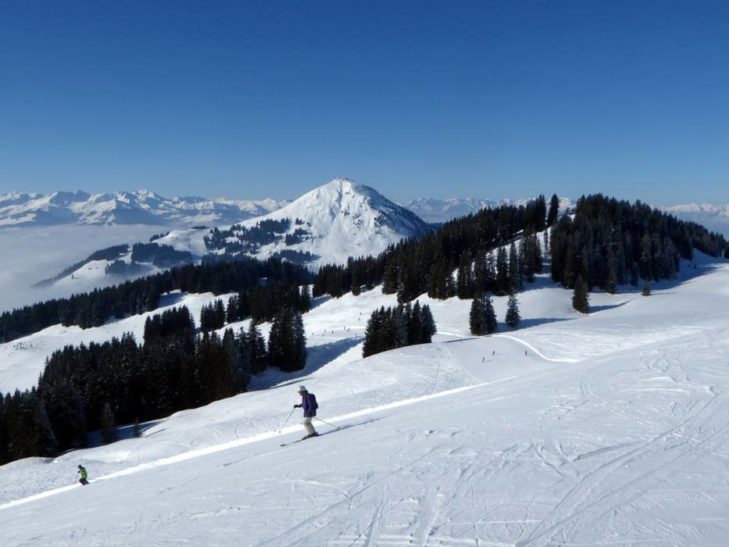 © Skiresort
The forest makes for a special, natural experience in the SkiWelt Wilder Kaiser-Brixental.

Last, but not least, a recommendation that should not be missing from a list of exceptional forest runs: the Trametsch an der Plose in the Val d’Isarco ski area. With a length of 9 km, it is considered the longest downhill run in South Tyrol and leads for the most part through a forest. The route has a rather sporty nature, with wide carving passages in the upper section and narrower routing and sometimes tricky steep sections in the lower part. A wonderful run for experienced skiers – and a beautiful forest run to boot. 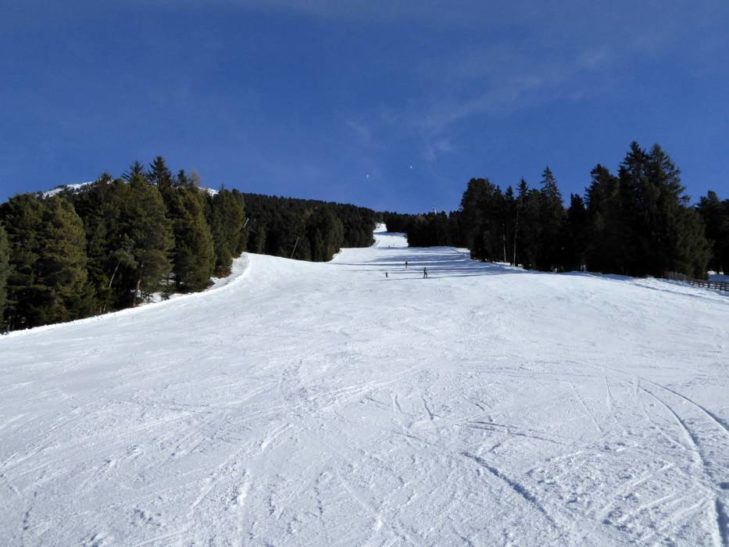 © Skiresort
The Trametsch an der Plose is the longest valley run in South Tyrol.