Ski Areas Skiing with James Bond: 007 locations in the Alps

Wild chases through the deep snow and spectacular stunts on skis or snowmobiles are part of the obligatory repertoire of many James Bond films. The unique panoramas of the imposing Alps in Austria, France, Italy and Switzerland form the perfect backdrop for action scenes. Here is our selection.

© 2015/Sony Pictures Releasing GmbH
Daniel Craig as James Bond in „Spectre“.
Index
James Bond filming locations in the Alps – an overviewSpectre (2015)The World Is Not Enough (1999)The Living Daylights (1986)For Your Eyes Only (1981)The Spy Who Loved Me (1977)On Her Majesty’s Secret Service (1969)Further filming locations in Switzerland

James Bond filming locations in the Alps – an overview

Many scenes of the 24th James Bond film were shot in the Ötztal, more precisely in the ski and party hotspot of Sölden. At the Gaislachkogl peak in the middle of the skiing area, and on the glacier road with the highest road tunnel in Europe, the film crew found the perfect locations to stage dramatic duels and action-packed chases with threatening villains. “Tyrol had everything we needed to shoot such sequences,” co-producer Gregg Wilson said even before the shooting in Ötztal. Director Sam Mendes also called Sölden a “fantastic place”.

The Americans were particularly taken with one central location: the summit restaurant Ice Q at an altitude of 3,000 m above Sölden. The futuristic building functions as the clinic of Franz Oberhauser (played by Christoph Waltz). With its puristic architecture, the cool cube with its glass fronts forms the ideal setting. “And what would be more exciting than being on top of the world”, says Dennis Gassner, production designer and location scout. This symbol of Bond’s universe hits the nail on the head here at over 3,000 m above sea level.

The Ice Q-Restaurant was even rebuilt in London to shoot some action scenes. However, in the finished film the double can’t be distinguished from the original. Several scenes were also shot in the small villiage of Obertilliach in East Tyrol. A small church surrounded by old farmhouses, in addition to a small ski slope with a handful of lifts. This is Tyrolean charm in its purest form. The authentic backdrop of the original village forms a sharp contrast to the modern glass building on the Gaislachkogel and once again shows the rich variety of Austrian locations.

“The world is not enough” was the third James Bond movie in which Pierce Brosnan played the famous character. In Chamonix, France, he shot it alongside Sophie Marceau, who plays Elektra. The two are attacked from the air by four paragliders. What follows are scenes in the usual, action-packed Bond manner.

The municipality with the small lake north of Hermagor in Carinthia is particularly idyllically situated. The area around the lake becomes almost mystical in its white winter coat. Among other things, the frozen lake served a filming location for 007 pursuit scenes. James Bond, then played by Timothy Dalton, is discovered and hunted by the border police while trying to cross the pass with the pretty Kara unnoticed.

More wild chases on skis and motorcycles through the Dolomites can be seen in the 1981 film, starring Roger Moore. The sophisticated resort of Cortina d’Ampezzo with its great skiing area, surrounded by majestic 3,000-metre peaks, formed the perfect backdrop. The scenes were shot at several locations, including the ice rink, the bobsleigh track, the observatory and the magnificent Miramonti Majestic Grand Hotel. The place is therefore in great demand among die-hard Bond fans.

Engadin, a high valley in the Grisons, is not only snow-reliable, but also offers an extremely varied landscape with lakes, glaciers and forests. An ideal location for a Bond film with Alpine flair. The opening scene of the 1977 film was shot very close to the luxurious ski hotspot of St. Moritz. James Bond is followed – once again – and flees on skis over the snow-covered slopes. By the way, the ski scenes were created under the direction of the Munich entrepreneur Willy Bogner. The ex-ski racer already participated in several Bond films behind the camera, as he was able to stage the action in the snow like no other.

Another Bond landmark, which still attracts numerous tourists and fans today, is located near Mürren in the Jungfrau region – more precisely on the summit of the 2,970 m high Schilthorn. In the film, the summit plateau is the headquarters and research institute of the villain Blofeld. In reality, the fictitious fortress is a modern 360° revolving restaurant, which today houses a small Bond museum with an interactive exhibition on filming. Here visitors can take a flight lesson in the helicopter simulator or watch film clips in the museum’s own cinema. Everywhere in the restaurant the 007 logo is emblazoned and on the menu you can find the “Cappuccino 007”, the “Spaghetti James Bond”, the ice cream sundae “Coupe 007” and of course the “Martini 007”.

The Jungfrau region seems to be a particularly popular location for Bond directors. In Grindelwald, for example, a fast-paced escape scene on skis was shot. There are also fast car chases between Stechleberg and Lauterbrunnen on the ice rink, at Furka Pass and in Andermatt. 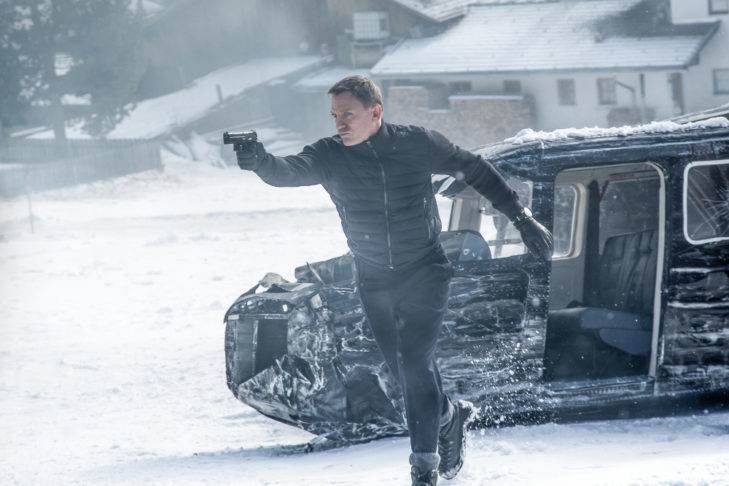