Ski Areas All Things Lifts: Types of Lifts, from Tow Lifts to the "3S-Bahn" Lift

All Things Lifts: Types of Lifts, from Tow Lifts to the “3S-Bahn” Lift

Without lifts, skiing would only be half the fun. After all, who wants to trudge up the mountain after a successful descent? So, what are the different types of lifts? What, for example, is the difference between a gondola and a funitel? A small lift guide for all types of ski lifts:

They are indispensable for alpine sports enjoyment: cable cars. The colloquial term “ski lift” is often used for any type of lift that transports skiers up the mountain. However, there is an extensive science behind this simple term. The bigger the lift, the more complex the technology behind it. Few people, for example, can explain the difference between a bi-cable and tri-cable gondola detachable. Not to worry, though – the following overview of the most common cable car variations makes it clear that the types of lifts are usually not that complicated:

In general, there are three types of cable cars/lifts:

They are all moved by a hoisting rope, which is guided by a winch. Finally, the passenger compartment, or in the case of ski lifts, the platters or brackets, are suspended from a clamping device. In chair lifts and cabins, the clamps are either fixed or detachable. 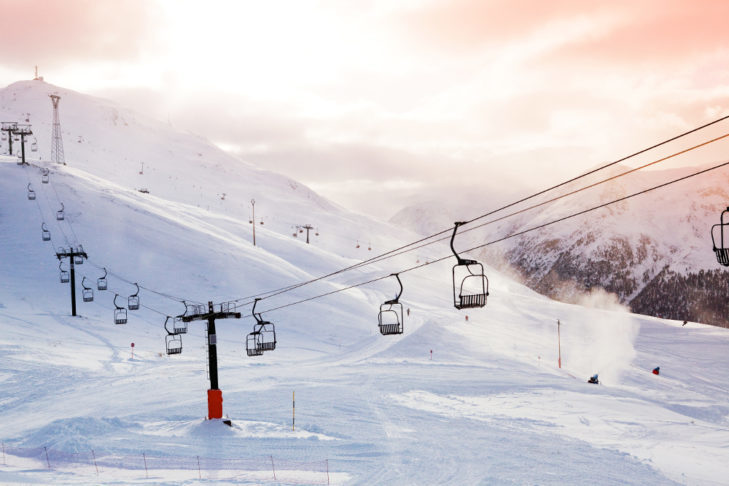 © Shutterstock
A classic two-seater chair lift without any frills.

There are significant differences between the different types of lifts when it comes to suspension from the rope. Tow lifts and some types of chair lifts are fixed to the rope with a clamp and have a “fixed grip”. Detachable chair and cabin lifts are also clamped to the rope, but can be detached from the rope in the station. For this purpose, several rollers are attached to each clamp, which roll on a suspension rail in the station. The cabins are then guided through the station via a rail. This technology has a decisive advantage: the lift can be braked after its journey and driven through the station more slowly, which makes boarding and disembarking more comfortable for guests and makes handling faster overall. Since the speed is only reduced at the station, the lift can then travel much faster, travelling up to 6 m per second. Thanks to this combination of speed and comfort, detachable lifts are considered “state of the art” in the lift business. But let’s start small:

The platter lift is often referred to as the “baby lift”. However, this single-seater requires some balance while on skis and must be ridden all alone. So, the term “baby” by no means applies to its passengers. However, platter lifts are usually only found on flat hills for beginners. Bigger children and adults ride relatively safely standing up and firmly connected to the ground. 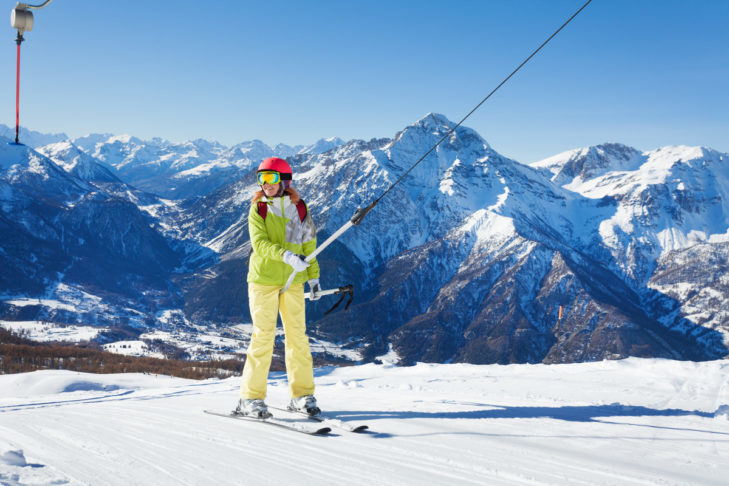 © Sergey Novikov/shutterstock.de
The platter lift takes only one person at a time.

Popular as a lift for flirting, but in many ski areas already replaced by more comfortable chair lifts, is the t-bar lift, sometimes also referred to as the anchor lift. Since it is most comfortable to ride it in pairs, this type of lift is considered a predestined opportunity for small talk or even flirting. However, longer ascents with the t-bar lift are not particularly pleasant, as the slightly angled position in the ski boot can become strenuous in the long run and eventually lead to burning thighs. The advantage of this lift is that you can get out at any time if you really can’t do it anymore. 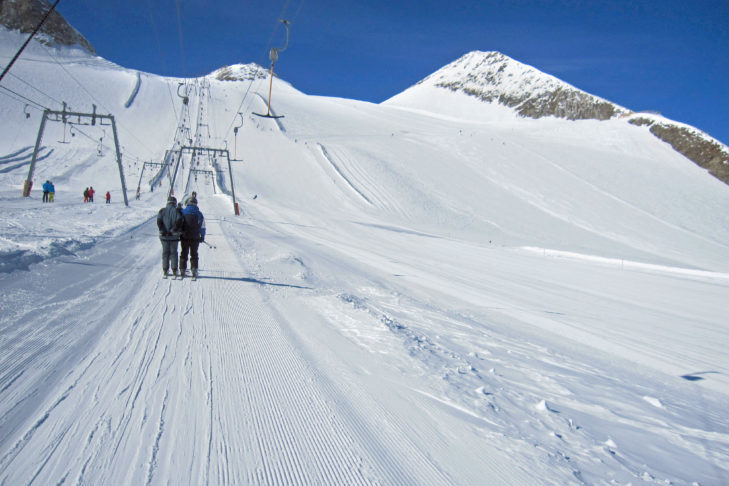 © TravelTrex
Comfortable lift for two: the t-bar lift/anchor lift allows for this.

A special type of lift system close to the ground is the so-called magic carpet, a rubberized conveyor belt, which is mainly used in flat terrain for beginners. The conveyor belt on the ground moves forward as if by magic with skiing children. Hardly any children’s area can do without this form of baby lift. Presumably to take the fear of the moving belt away, the carpet lift manufacturer “Sunkid” has coined the more appealing name “Wonder Carpet”. The popular assembly lines can be found in almost all children’s areas. 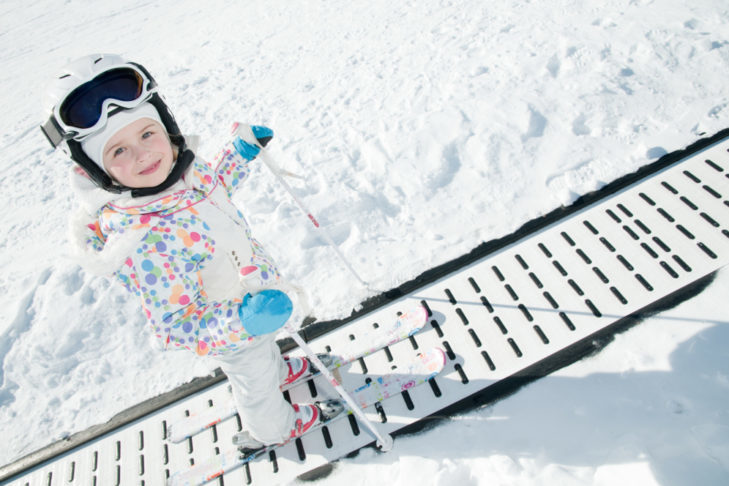 © Shutterstock
Popular with the little ones: the magic carpet.

The larger ropeway variations, the cable cars, are only connected to the ground via their supporting pillars and transport far more people at the same time. Cable cars include chair, cabin and gondola lifts. A fundamental difference here is that you can keep your skis or snowboard on while in the chair lift, but they have to be unstrapped while in the cabin lift. However, there is more to differentiate: Cable cars, for example, operate either in pendulum or orbital mode. 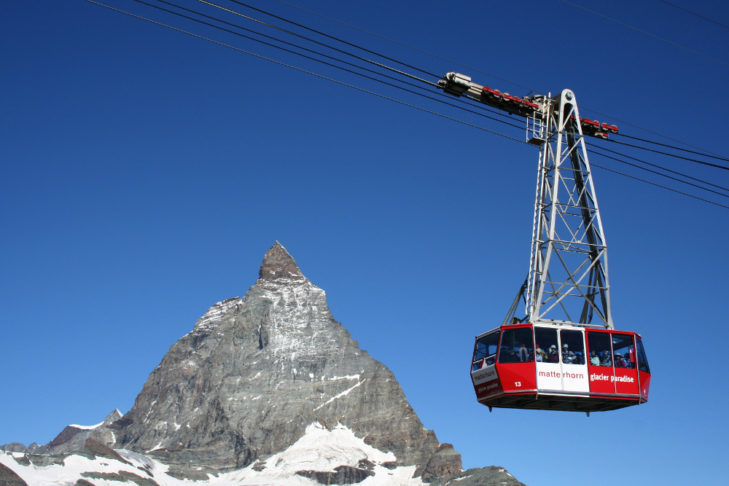 © Zermatt Tourismus/Leander Wenger
Aerial tramways take you high up. Here’s one version of a cable car.

Reversible aerial tramways operate on the same route between mountain and valley. There are two large-capacity gondolas in pendulum service, each of which can accommodate up to 200 people at a time. They are very wind-stable and ideal for rough terrain and high altitudes. The Vanoise Express in the French Paradiski ski region is a famous example of a reversible aerial tramway. Each of the two double-decker cabins can accommodate 200 winter sports fans including equipment, and even when fully loaded, it only takes four minutes to travel the almost 2 km long route. 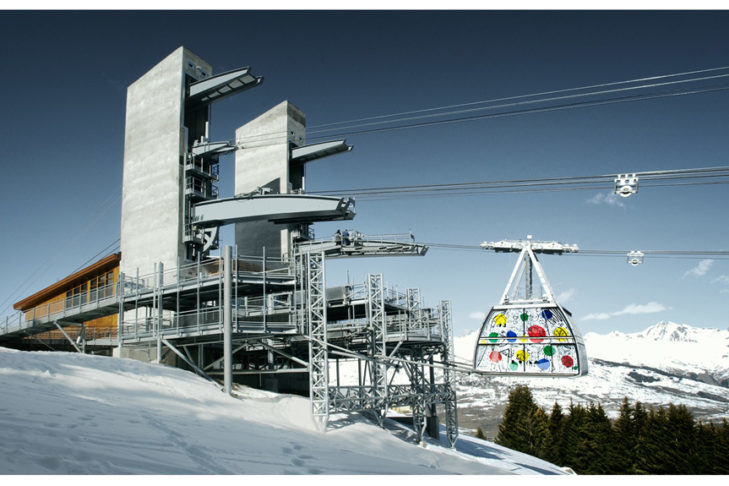 Circulating cable cars are guided on an endlessly circulating hoisting rope to which several gondolas or chairs are clamped. In this way, the passenger cabins always move forward or in one direction and are guided through a curve at the mountain and valley stations. There are several different types of circulating aerial tramways:

The chair lift is by far the most frequently used type of cable car in ski areas. It has relatively low investment costs and today offers extensive comfort with heated seats, protective hoods and electronic brackets with child protection. Modern lifts transport up to 10 people in one chair and have a very high capacity. Smaller chair lifts for two or four people are permanently clamped, the larger ones with eight or ten seats can be detached and thus create a higher transport capacity.

© Switzerland Tourism/Jan Geerk
The most frequently used type of aerial tramway is the chair lift.

As the name suggests, these aerial tramways have only one rope, which serves as a carrying and pulling rope at the same time. They are often cable cars with narrow benches for six to ten people. Most detachable chair lifts are monocable tramways, but there are also gondola lifts as shuttles to ski areas or to intermediate stations that hang on only one cable. 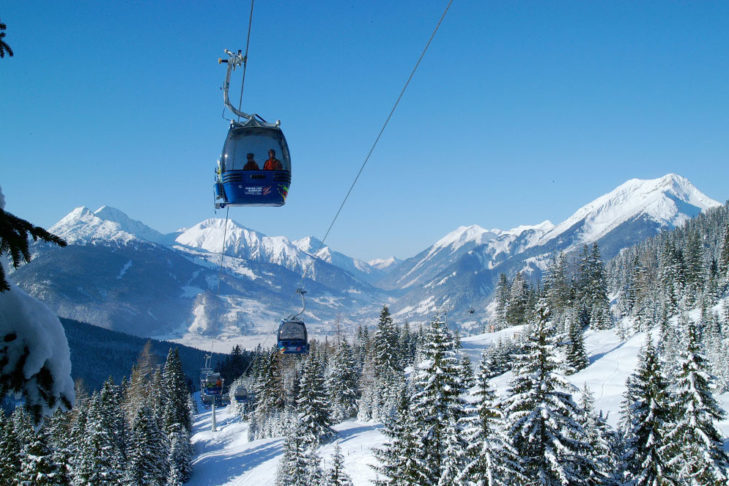 © Ehrwalder Almenbahn
A monocable gondola detachable in front of a wintry landscape.

The essential feature of the bi-cable gondola detachable is that it has a supporting cable and a traction cable. With the so-called 2S-tramway, in addition to the circulating hoisting rope, a second, non-moving supporting rope takes over the task of carrying part of the weight of the cabins. The advantage of the 2S tramway is the large tensioning fields, so that fewer supporting pillars are needed. Bi-cable gondola detachables are almost always gondolas that can accommodate between 10 and 15 people, so that the conveying capacity is also higher.

The so-called “3S-Bahn” is the ultimate large-capacity gondola. It has two carrying ropes and a pulling rope, which makes it particularly safe to operate and wind-stable. It also has the highest transport capacity (up to 5,000 passengers per hour) and an enormous spanse, which makes even fewer supporting pillars necessary. All this makes them very attractive for large and high-altitude ski areas. The highest 3S lift in the world is the “Matterhorn glacier ride” in Zermatt. 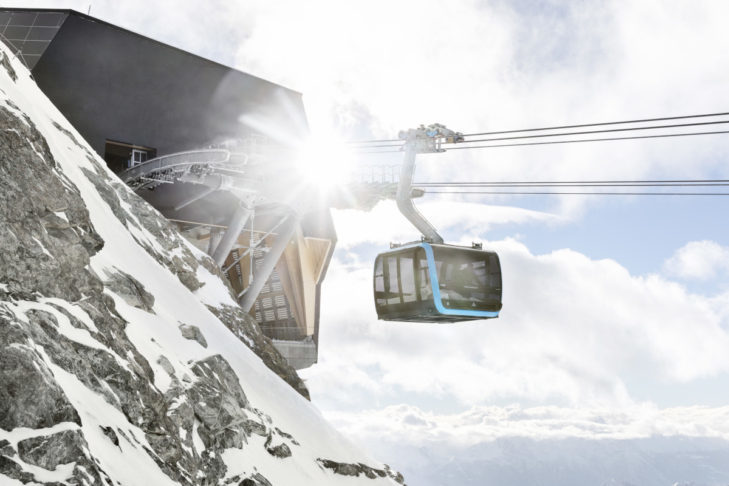 © Zermatt / Pedro Rodrigues
The highest 3S-bahn in the world in Zermatt.

Funitel is a special form of the bi-cable gondola detached. The special features of this type of lift are the parallel guided hoisting ropes and the very short suspension of the gondola. Due to the double coupling, they are very wind-stable and move very quietly. Due to the high ride comfort on longer distances, as well as the high capacity (approx. 4,000 passengers per hour), the funitel is particularly suitable as a ski area shuttle. The very first funitel was put into operation at the beginning of the 1990s in Val Thorens, France, where it is still in use today.

In some places, cable cars and chair lifts are combined to form combined lifts. With the so-called Telemix, a cabin and a chair hang alternately on the rope. At the station, the passenger can choose whether to sit in the chair or in the cabin. This variation is particularly practical when many pedestrians or beginners take the train. In ski areas, however, the Telemix is rather rare. An example can be found in the Mayrhofen-Hippach ski area.

The funicular railway, which is guided on rails and is firmly connected to a wire rope, which is guided over a sheave at the mountain station, emerged from the classical rack railway. The main characteristic is the structure of the carriage, which is adapted to the gradient in an inclined direction. Since there is often only one rail guide, the two carriages meet in the middle of the section where there is an alternative point on their way up or down.

© Hermann Eber/OÖ Tourismus Marketing
The funicular railway on the Wurzeralm.