Snow-covered mountains, skiing, the flair of mountain huts and a big fireworks display. New Year’s Eve in the mountains makes the turn of the year something unique – and it can be wonderfully combined with a skiing holiday. SnowTrex has travel tips for ski holidays over New Year’s Eve.

At the turn of the year, Kitzbühel is going to be a real blast. In Gamstadt, the festivities at the turn of the year traditionally take place on New Year’s Day. Then there will be a big event with sound fireworks, music and a ski show by the local ski schools. The public fireworks show, composed by pyrotechnic-professional Armin Lukasser, starts at 17:30 and can be entered without admission. The supporting programme includes a torchlight ski run organised by the ski schools. Already before, on 30/12 and/or 31/12, fireworks likewise take place in the neighbouring resorts Reith and Jochberg. Like this, guests can look forward to altogether three fireworks in three days. Fancy the turn of the year in Kitzbühel?

As expected from a party hotspot, Ischgl ends the year generously with a big sound fireworks display. It starts on 31/12 at 23:50 at different sound points, which provide a light and sound spectacle filling the entire valley. Fancy the turn of the year in Ischgl?

With over 100 events a year, Saalbach can boast of being an event centre. It goes without saying that New Year’s Eve is also a special occasion. The “Unlimited Snow Show” includes a Magic Pistenbully (snow cat) show, a ski show with a flag parade and huge fireworks. Furthermore, Saalbach is predestined for great New Year’s Eve parties. Over 40 huts and après-ski bars await party-hungry New Year’s fans. Fancy the turn of the year in Saalbach-Hinterglemm? 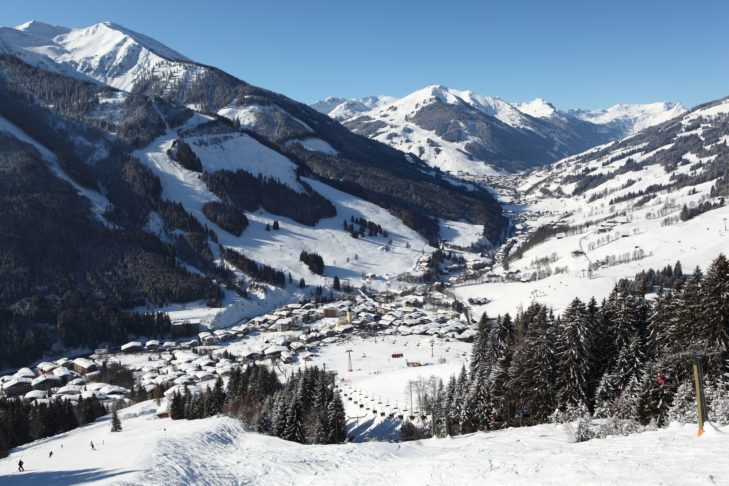 © Saalbach-Hinterglemm
Panoramic view of Saalbach in the Glemmtal valley.

4. Pop music fireworks at the Arlberg

As a so-called “snow hole”, the Arlberg is always a popular ski destination. On New Year’s Eve, fireworks and parties will add to the fun. The big sound fireworks on 01/01 in Zürs already have a long tradition. Countless fireworks are fired to the beat of well-known pop-rock music. The event starts with a DJ set at 21:00, the actual starting signal for the fireworks is planned at 22:00. A lot is going on around the turn of the year in other places at the Arlberg as well. The biggest New Year’s Eve parties take place in the hip clubs in St. Anton. To get in the mood for New Year’s Eve, the ski show “Schneetreiben” with 150 skiers, light projections, 3D effects and concluding fireworks takes place in St. Anton on 30th December from 21:00. Fancy the turn of the year in St. Anton? 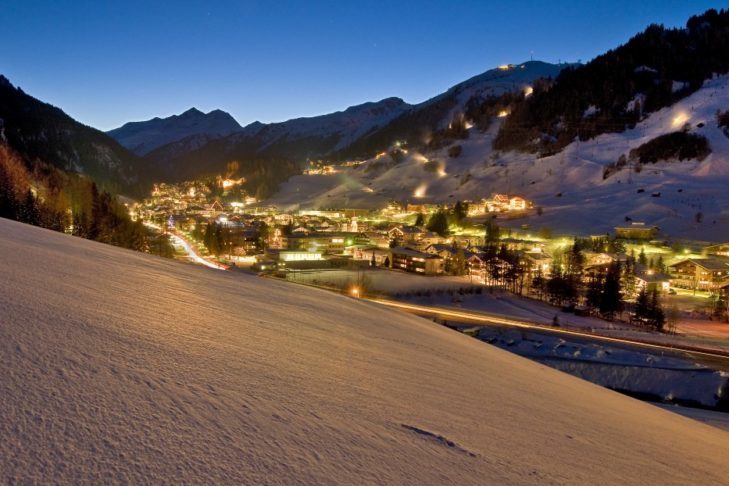 In the Engadin region, the transition from the old to the new year is mostly celebrated in style. The hotels in St. Moritz offer New Year’s Eve gala menus, dance parties and live music. A special event takes place at the Suvretta House: At the New Year’s Eve ball “Carnival in Rio”, Mediterranean rhythms are heard and Brazilian show performances are part of the programme. – Champagne and tuxedo dress code included! Fancy the turn of the year in St. Moritz?

6. Moonlight skiing at the Matterhorn

A unique backdrop awaits you in the ski area “Matterhorn ski paradise”, the most famous of all the Swiss mountains. In the face of the Matterhorn, the fireworks of New Year’s Eve seem even more sublime. In Zermatt, 60 bars and nightclubs provide the suitable variety for a successful party night. Equipped with headlamps, it goes down the piste at dusk. Afterwards, a fondue dinner awaits the participants. Fancy the turn of the year in Zermatt?

7. Festival of lights in Val d’Isère

In the noble French ski resort Val d’Isère, which maintains a lift network with Tignes, there is a lot going on during a ski holiday over New Year’s Eve. As every year in December, the pedestrian zone in the centre of Val d’Isère is the scene of the “Airstar Night Light”. During the festival of lights, the streets are specially illuminated and ice sculptures are carved and exhibited live. The spectacle is accompanied by live music, a fire show and a mulled wine bar. Fancy the turn of the year in Val d’Isère?

Zillertal has come up with an original idea: The lovingly decorated “New Year’s Eve Train” runs on the rails of the famous Zillertal Railway at the turn of the year. Ten stations from Jenbach to Mayrhofen are served by the nostalgic steam locomotive, which is driven by an honorary locomotive driver. The Bundesmusikkapelle (local marching band) will start the tour, and guests of honour will get a glass of sparkling wine. During the ride, there will be feasting and partying on the train. Tickets for the extraordinary ride are available directly from the Zillertalbahn. Fancy the turn of the year in the Zillertal?

9. Quiet or fast in Ötztal

In Ötztal, one could say you have a guarantee for a white Christmas and a snowy turn of the year. Sölden is the number one place to go for many. The attractive ski area with approx. 260 km of piste and the resort with its many nightlife locations is without doubt a great travel destination. Over New Year’s Eve, the après ski centre offers wild parties, and huge fireworks are taking place in resort on New Year’s Day. We recommend Obergurgl-Hochgurgl, approx. 14 km from Sölden, as a quieter, wildly romantic and very snowy ski destination to spend your turn of the year at. The villages situated at 1,930 m and 2,150 m, respectively, for them quiet end of Ötztal valley in a simply fantastic mountain scenery with little hustle and bustle, and a lot of peace instead. Fancy the turn of the year in Ötztal?

Would you rather go skiing at Christmas? SnowTrex knows top destinations for ski holidays over Christmas.