The 10 highest ski areas in Switzerland

Switzerland is without doubt one of the Alpine countries with the most magnificent mountain panoramas. A sea of 3,000 and 4,000 metre peaks offers over 330 ski areas with countless possibilities for piste lovers and freeriders. Distinctive mountains such as the Matterhorn or unique natural phenomena such as the Aletsch Glacier are world-famous. In Canton Valais, there are well-known ski areas such as Zermatt, Saas-Fee, the 4 Vallées or parts of the Portes du Soleil, but Graubünden also has many prominent destinations with Davos Klosters, St. Moritz, Arosa-Lenzerheide, Corvatsch and Laax. Thanks to their geographical location, many of the ski resorts are located at altitudes above 3,000 m, with snow ensured. These are the ten highest ski areas in Switzerland.

The ski area most famous of all Swiss mountains is also the highest in the country: the Matterhorn ski paradise reaches up to 3,899 metres. The tow lift on the Theodul glacier rises to the highest mountain station in Europe that can be reached by skis. The ski slopes extend from the car-free ski resort of Zermatt across the Italian border to Breuil-Cervinia and Valtournenche. The Matterhorn ski paradise, for example, is the highest ski area not only in Switzerland, but also in Italy.

© Online-Archiv Zermatt Tourismus - Kurt Müller
The highest ski area in Switzerland lies on the Matterhorn, the most famous of all the Swiss mountains.

The Free Holiday Republic of Saas-Fee not only offers Saas-Fee, the second-highest ski area in the country, but also one of the largest. Winter sports fans can discover 100 kilometres of pistes plus ski routes here. Thanks to a good mixture of blue practice slopes and tricky black pistes, experienced skiers as well as (returning) beginners will find the right slope. With pistes up to 3,573 m at the Allalin glacier, the ski area is also an attractive destination in the summer. Another recreational factor: just like Zermatt, the village of Saas-Fee is car-free.

The 4 Vallées (four valleys) around Mont Fort (3,330 m) form the third-highest ski area in Switzerland. With 412 kilometres of pistes, it is also the largest ski area in Switzerland. The extensive, tree-free powder snow slopes make the ski area a hotspot for freeriders. Only a black piste leads from the summit of Mont Fort at 3,330 m to the gondola lift. There are five places to start your skiing adventure, including the prominent Nendaz and Verbier ski resorts. The latter is world-famous as a stop on the Freeride World Tour.

© Nendaz Tourisme - Richard Amacker
In the 4 Vallées – like here at Nendaz – you will find dreamy deep snow areas.

The fourth-highest ski area in Switzerland – the Corvatsch ski area – has some superlatives to offer: it has the highest mountain station in Canton Graubünden and, at 4.2 km, has the longest night ski run in Switzerland. The highest piste point is at 3,303 m on Corvatsch, where a unique view of the Bernina massif opens up with the Piz Bernina. A 9 km long valley descent leads to St. Moritz. The level of the pistes is mainly red and is aimed at advanced skiers.

The small Hochsaas ski area with 34 kilometres of pistes is situated above Saas-Grund and is therefore not far from the well-known holiday resort of Saas-Fee. While the lower part of the Kreuzboden is flat for beginners, there are only deep red pistes at the Triftgletscher from the highest point at 3,142 m at the Hochsaas mountain station. Hochsaas is in good company with its location in the Saas Valley: the view of the surrounding 4,000 m peaks is breathtaking.

The Belalp-Blatten ski area lies in the Valais, the region with the highest peaks in the country. Around 60 km of pistes meander down the flanks of Hockstock, Sparrhorngrat and Schönbiel. The highest lift station in the ski area is on the Hochstock at 3,118 m, where fantastic freeride routes open up. The panoramic view of the famous Aletsch Glacier is another highlight of this skiing gem. 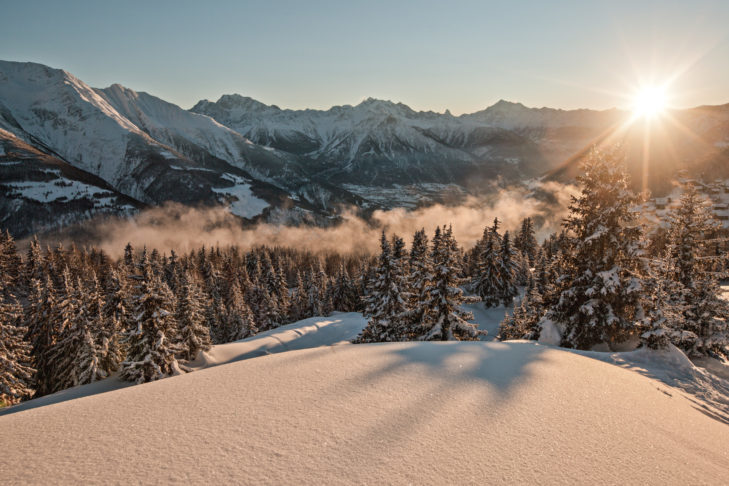 In the “magical” Lötschental in Upper Valais, you will find the entrance to the Lauchernalp ski area, a medium-sized area with 55 km of pistes offering plenty of free terrain for freeriding. Below the summit of the Hockenhorn lies the Hockenhorngrat mountain station at 3,111 m, from where a blue and a black panoramic descent and even a hiking trail start.

One of the most famous ski resorts in Switzerland is the sophisticated St. Moritz in Engadin. The associated ski area of St. Moritz-Corviglia has 155 km of pistes and reaches 3,057 m at Piz Nair. Thanks to its favourable climate, the plateau is known for its dry powder snow, “Champagne powder”. St. Moritz has already hosted two Olympic Winter Games (1928 and 1948) and the FIS Alpine World Ski Championships in 2017.

Not everyone is familiar with this small ski area between the villages of Saint Luc and Chandolin in the Lake Geneva region, but it is equipped with slopes over 3,000 metres above sea level that ensure snow. A total of 60 km of pistes and 13 lifts are available for winter sports fans. Two of these lifts serve the Bella Tola natural ski area (3,026 m), where several red slopes and two ski routes run.

The top list of the highest ski areas is rounded off by another more famous ski area: Engelberg-Titlis has 72 wonderful kilometres of pistes and is one of the largest ski areas in Central Switzerland. The “Titlis-Rotair”, the world’s only rotating panorama cable car, takes you up to the Titlis glacier at 3,020 m, where red pistes, a high-altitude hiking trail and the Titlis Cliff Walk suspension bridge await you with spectacular views.

Fancy a skiing holiday in Switzerland?