10 good reasons for skiing in France

Nowhere else in Europe are there such extensive ski resorts as in France. With the Trois Vallées, the European Eldorado of kilometres of pistes offers the largest interconnected ski area in the world, as well as several top spots for freeriding and “smaller” areas from 100 km of pistes for families. The phrase “skiing like God in France” is thus truly justified. SnowTrex shows 10 good reasons why skiing in France is absolutely worthwhile.

1. Holidays directly on the piste

There are almost 400 ski resorts in France, and about 30% of the world’s ski resorts are on French terrain. Like this, it is not too much of a surprise that the sporting aspect of skiing is the focus of attention in France. As part of the idea of “skiing as national sports” many ski villages have been built since the 1960s with the aim of enabling as many people as possible to ski. Thus, in just a few decades, numerous ski villages were built, which either joined the existing ski resorts or opened up new smaller ones. The villages usually consist of two levels: below the original, traditional village and above the modern ski resort with hotels and apartment complexes. The advantage of this is that guests live right next to the lift and fall from their beds directly onto the piste.

Rapid development, little tradition? There is a widespread opinion that the French have lost the traditional romanticism of huts. But this is by no means the case. You just have to know where to go skiing. Smaller towns like the Savoy Saint Sorlin or the cosy Valfréjus radiate the charm of French mountain villages. Wooden mountain huts for warming up from inside and outside can be found at nearly every mountain station even in the big resorts. 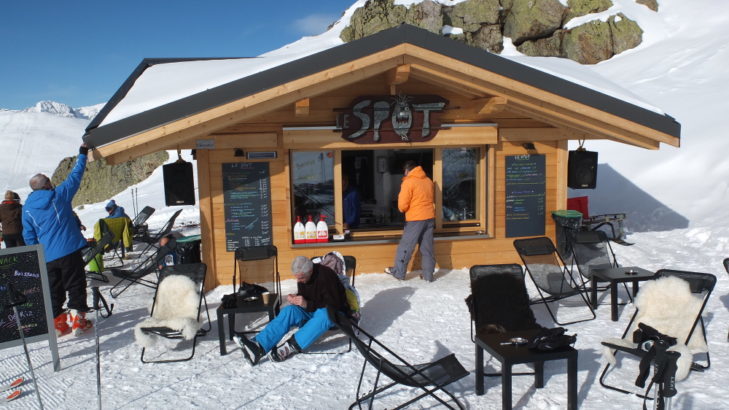 3. Party is included in the package

In accordance with the philosophy of the stopping for a drink after skiing, you will not have to miss out on the great fun after the closing of the lifts. In party centres such as Val Thorens in Trois Vallées or La Plagne, night owls can experience après ski parties and long evenings in clubs. The huge mountain landscape of the Savoy Alps with its neuralgic ski centres such as La Plagne, Val Thorens, Tignes and Valmeinier is predestined for the combination of “piste and party” anyway. What counts, however, is what the guests themselves make of the evening. Many want to relax with a cultivated glass of wine, but some also want to go dancing. During the day, the larger ski regions offer mountain huts and umbrella bars in the ski area, as well as often an “in club” in the resort centre where the party people gather. 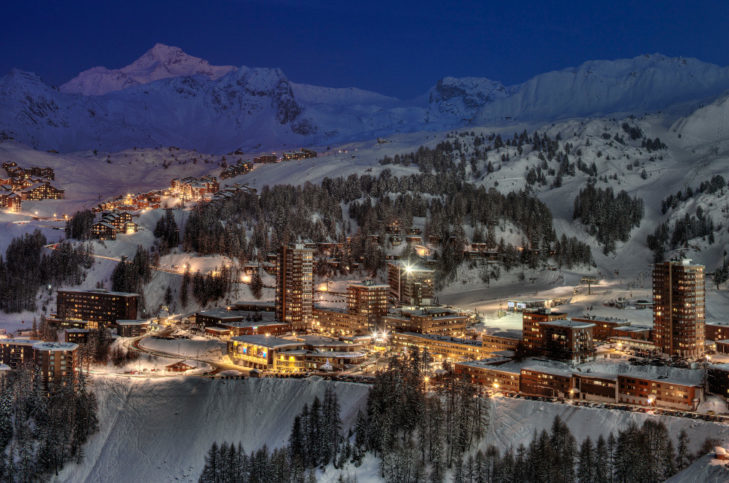 © OPGP/E. Sirparanta
In La Plagne there is also a lot going on in the evenings.

The Haute Savoie département is located in the very East of France, in the highest mountains of the French Alps. It is the absolute hotspot of unlimited fun on the slopes. At the foot of Mont Blanc (4,810 m), the “roof of Europe”, lies the Portes du Soleil mega ski area with an enormous 650 km of pistes. To be fair, it should be noted that this is not a purely French ski resort, as it partly covers the Swiss Valais. Nevertheless, all slopes can be used with one and the same ski pass. La Plagne and Les Arcs together form the large Paradiski network, another highlight on French soil offering 425 km of pistes.

A big regional alliance has also made the Val d’Isère a big player: The ski area of the same name has merged with Tignes, a network with 300 km of slopes. The other top areas like Chamonix with 115 km or La Clusaz with 132 km seem almost small in comparison. Nevertheless, the variety is great here as well, and above all freeriding is a pleasure.

However, that’s not enough with the superlatives. The Hautes Alpes scores – apart from the Mont Blanc Group – with the highest mountains in France, several of which scratch the 4,000 m mark. The Barre des Ecrins (4,102 m) is the southernmost four-thousand-metre peak in the Alps. The best conditions for a varied winter sports terrain. At the Massif de Dévoluy, for example, there are a total of 100 km of pistes to choose from, in the Fôret Blanche there are 185 km, in Serre Chevalier even 250 km.

France would not be a superlative skiing holiday destination if it didn’t have something for every need. Families with children will find their dream of a skiing holiday realised in large and small valleys: Val d’Allos in the Espace Lumière, the manageable Puy St.Vincent with 75 km, the beginner-friendly Super Dévoluy with around 100 km of slopes, Vars-Le-Claux in the Forêt Blanche and the tranquil Saint Sorlin. All these resorts have received awards for their family friendliness. The standard of this label lies in the family-friendly infrastructure, professional childcare as well as an entertainment and activity programme for all ages. 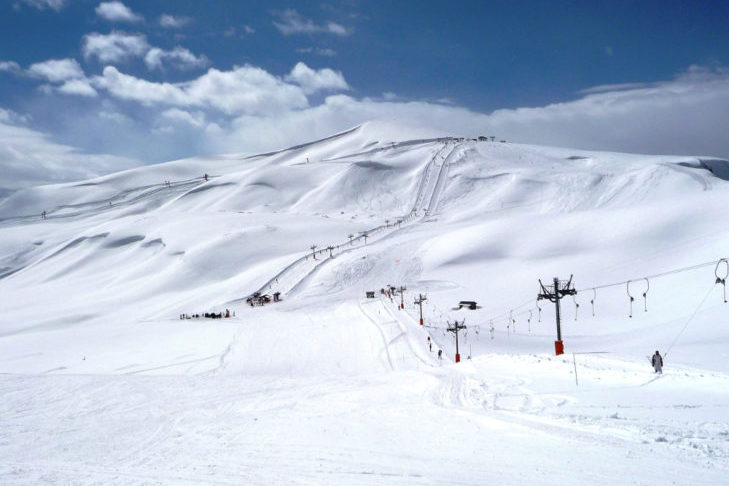 7. The sunny south is for pleasure skiers

The Maritime Alps in southeastern France are known above all for their scenic diversity with imposing gorges, massive mountain massifs and bizarre rock ridges. In this scenery lie charming small ski villages with many hours of sunshine and slopes up to 3,000 m above sea level. The Espace Lumière with 180 km is one of the largest ski resorts in the Southern Alps. A breath of warm air from Côte d’Azur blows into the southernmost Maritime Alps. The southernmost winter sports areas of the French Alps are thus characterised by clear air and a mild climate.

Les 2 Alpes with its transition to the freeride area of La Grave is considered a Mecca for fans of deep powder snow. Freeriders have a total of 100 km of ski routes at their disposal. It’s hardly possible to get any more! Another hot spot for extreme skiers are the slopes of Le Pas de Chèvre, Le Glacier de Rognins or Vallée Blanche. The latter is an unprepared descent of about 20 km down to Chamonix, and it is known as one of the most famous deep snow descents in the world. The powder heart beats up to your throat. Off-piste freaks, who rather romp around in the northern regions of the French Alps at the Swiss border, should test the powder in the huge Portes du Soleil, where there are 50 km of ski routes to choose from. 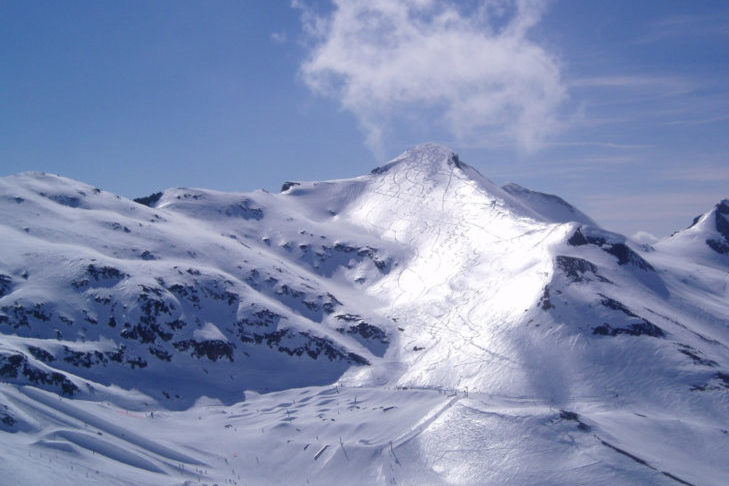 © TravelTrex
On the sunny side in Les 2 Alpes.

With such a large number of pistes, it is not surprising that many records have been set in the French regions. The Trois Vallées are at the forefront of the race for the largest interconnectes ski area in the world, with an incredible 650 km of downhill runs (including ski routes), as well as the cross-border region of Les Portes du Soleil with 650 km (plus 50 km of freeride zone). The longest run in Europe is the 16 km long “La Sarenne”, which runs through the Alpe d’Huez ski area. The glacier area at Pic Blanc is particularly famous for its long and steep pistes. The largest cable car in the world is the Vanoise Express, which connects the ski resorts of Les Arcs and La Plagne to Paradiski. The gondola holds 200 people on two floors, and takes them up to an altitude of 1,824 m in just 4 minutes. This makes it the largest and fastest aerial cableway in the world.

Skiing in France is absolutely recommendable also from a financial point of view. Compared to destinations such as Austria or Switzerland, France often has much cheaper offers that save money. Especially families with children or larger groups are particularly happy about this.

Our conclusion: France is a top destination for all skiers.