The La Printse ski area and the ski resort of Veysonnaz offers all of the requirements necessary for a successful ski holiday in the 4 Vallées ski region. With the “4 Vallées” lift pass, 74 lifts carry winter sports fans to 412 km of piste, 220 of which are in the La Printse ski area. This extensive offer has been awarded an excellent 4.3 out of 5 stars by our experts.

The Veysonnaz ski resort is a mountain village in the Swiss canton of Valais, which lies at 1,233 m altitude in the picturesque Rhone Valley. The La Printse ski area is named after the Printse River, located down in the valley, with Veysonnaz stretching out alongside it. Spread out between 1,400 m and 2,700 m altitude, the La Printse ski area has 38 lifts, which connect to 200 km of diverse pistes. Families and returning skiers can get into the swing of things along the 43 km of blue, easily navigable pistes. Experts will find 159 km of red, intermediate runs while experts weave along the 18 km of demanding, black pistes. The 38 lifts include five gondolas, 26 tow lifts, and seven chair lifts. With the “La Printse” lift pass, skiers, snowboarders, and freeriders have access to the Nendaz, Siviez, Veysonnaz and Thyon ski areas.

© Alpvision
Piste in the La Printse ski area with a dreamy panoramic view.

The 4 Vallées ski region, being the largest interconnected ski area in Switzerland, consists of the individual ski areas of Nendaz, Veysonnaz, Verbier and Thyon including Mont Fort. With its 3,329 m altitude, it’s the centre of the ski region. 214 snow-making facilities in the four valleys guarantee tons of fun in the snow. For the 412 km of piste, there are 74 lifts with 18 gondolas as well as 39 tow lifts and 17 chair lifts. 107 km of blue pistes, 202 km of red pistes, and 103 km of black pistes offer winter sports fans of all levels of experience diverse opportunities.

The snow parks “Centralpark Veysonnaz” in Thyon, “La Chaux” in Verbier, and “Woodpark” in Nendaz provide areas for beginners, experts, and pros alike. Freestylers will be able to take on challenges thanks to the diverse obstacles found there.

Cross-country fans will doscover carefully prepared trails at snow-sure altitudes in Veysonnaz’s neighbouring resorts: 5 km of trails in Thyon, 10 km in Nendaz, and 20 km in Verbier provide both leisurely and sporty experiences amongst breathtaking winter landscapes.

Snow depths in the La Printse ski area have an average depth of 20 cm at the valley station and 160 cm up at the mountain station. Winter sports fans can enjoy an average of 5.5 hours of sunshine per day.

Our experts have awarded the “Lifts & cable cars” category with four stars, and “Snow reliability” with five stars.

Winter holiday-makers can confidently leave their vehicles in Veyssonaz, as free ski buses run throughout the ski areas of the 4 Vallées. Several sports shops have rental stations, where you can rent ski, cross-country, and snowboard equipment from top international brands. Several shops also offer ski services and ski depots. The ski schools of “Neige Adventure” in Haute-Nendaz, “Arc-en-Ciel Siviez” in Siviez, and “Schweizerische Skischule” in Thyon offer both individual and group snowboarding and skiing lessons. They also have a few children’s ski schools and kindergartens for young winter sports fans. In Veysonnaz, there is also a children’s park with a magic carpet and a children’s piste, where even the little ones can get excited about skiing.

Veysonnaz has been the venue for skiing world championships and is known for its legendary “Piste de l’Ours”. This “bear piste” runs between Veysonnaz and Thyon and offers even experts a sporting challenge.

Winter sports fans can also experience romantic skiing pleasure under a full moon along the “Piste de la Dent” and the “Piste de Traxouet”. On the “Piste Fontanet”, ambitious skiers can compete in the “AudiQuattro” ski cross. Freestylers can run riot amongst the obstacles of the “Centralpark” snow park. The funpark in Thyon was named the best snow park in western Switzerland in 2011. It offers expansive areas for beginners and experts, as well as an inviting “chill out” area. Cross-country skiers in Thyon can glide along the classic “Piste de ski de fond de la Mura”, “Parcours de ski de fond de Thyon 2000” and the “Parcours de ski de fond des Chottes” with 1 km, 0.5 km, and 5 km lengths. Those who are fascinated by heliskiing can experience it for themselves in Verbier.

Our expters have provided the La Printse ski area with an excellent five stars in the categories of “Snow parks” and “Experts & freeriders”. The excellent offer for families and children, as well as the great orientation within the ski area, have each received four stars.

In the expert rating, the “Lifts & cable cars” category along with “Snow reliability” category help play a role in the overall rating. The La Printse ski area therefore receives an excellent overall rating of 4.3 stars. The high snow reliability, the unique snow parks, and the marvellous selection available for experts and freeriders have all been awarded a full five stars. Four stars have been awarded for “Lifts & cable cars”, “Families & children”, “Après ski”, “Orientation”, “Mountain restaurants, huts & gastronomy” and “Getting there & parking facilities”. 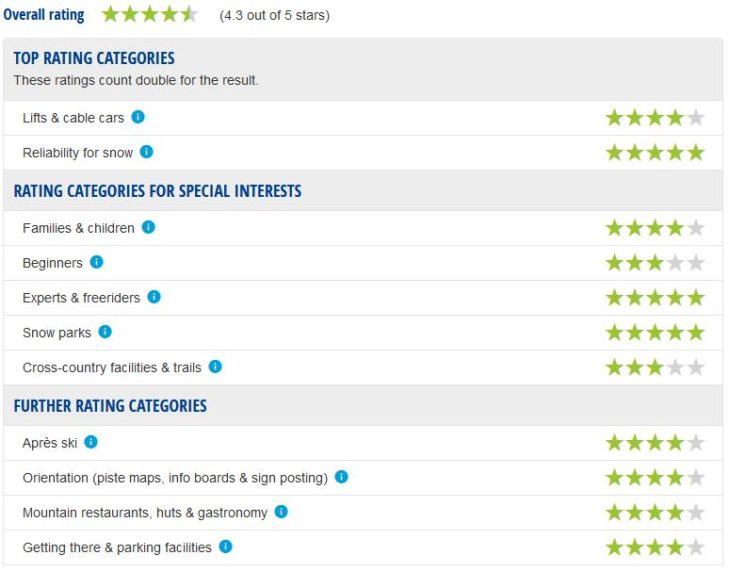 Winter sports fans can expect to find an extensive selection of diverse activities both on and off the piste in the La Printse ski area. Due to its altitude, Veysonnaz is an optimal starting point for snowshoe hikes in the middle of the incomparable mountain scenery. The easily navigable, 10 km long “Les Chottes de la Combyre” trail and the 5.3 km long, intermediate “La Zeu” trail are two of four marked snowshoe hiking trails that can help you leave everyday life behind in no time. Not far from the “Le Tipi” snow bar, winter sports fans can snowtube down a 75 m long track. Those who prefer toboggans can rent one from the toboggan hire shop and check out the runs in Thyon, Nendaz, and La Tzoumaz. For ice skaters, there are rinks available in Nendaz and Les Collons.

Valaisian cuisine is known for its cheese specialities, particularly “raclette”. Further culinary delicacies include a savoury cheese fondue, spicy Valaisian air-dried meat, and hearty “Gsottus” rounded off with fresh rye bread and regional wines. In Veysonnaz, around 20 mountain restaurants, ski huts, and bars offer a rich culinary assortment. In the village centre, the “Café Bon Vin” serves regional dishes in a cosy atmosphere, such as cheese fondue with palatable wines. The “Le Greppon Blanc” guests can expect to find an impressive panoramic view of the mountaints with typical specialities served on slate slabs and in kettles. In “La Terrasse”, holiday-makers can enjoy Mediterranean and French specialities while enjoying a breathtaking view of the Rhone Valley. At the chair lift station, the family-friendly “Relais des Mayens” eagerly awaits guests with its national dishes, and at the “Piste la Cheminée”, the little “Cabane des Crêtes” looks forward to guests stopping by. Rustic huts, like the “Les Caboulis” and “Les Chottes” can be reached from the piste and serve up Valaisian delicacies and local wines.

Winter sports fans who love to party should check out the “La Pacha” disco in Veysonnaz or enjoy live music in “Le Tipi” at 2,000 m altitude. In the “Bar le Barloucâ”, 75 special beers wait to be tasted, while live music provides for a great atmosphere in the “Bar Vague à l‘Âme”.

© Aline Fournier
The wellness programme begins in Veysonnaz, right next to the piste.

Relax your muscles in the indoor pool of Veysonnaz after a day of skiing or treat yourself to a massage, spend some time in the sauna, or soak in the jacuzzi in the connecting wellness centre.

Our experts have awarded the categories of “Mountain restaurants, huts & gastronomy” and “Après ski” with a well-earned four stars due to its extensive selection available in the La Printse ski area.

6) Locations in the ski area

Veysonnaz, with its idyllic altitude on the Mont Rouge, offers an impressive view of the Rhone Valley. The district is surrounded by the Valais and Bernese Alps and is home to around 600 residents in the county of Sitten, 13 km southwest of the same-name city.

Sitten (Sion), the capital of the Valais canton, is, with its historical city centre, a worthy destination for a day trip. Sights of the medieval old city include city hall, built in a Renaissance style, along with the “Notre Dame du Glarier” cathedral and the “Notre Dame de Valère” pilgrimage church, which stands on rocks of the same name.

Thyon lies at 2,095 m altitude in the Val d’Hérémence and splits itself amongst the districts of Hérémence and Vex. Thyon connects to Veysonnaz.

Veysonnaz, in the La Printse ski area, can be reached by car from the 286 km northeastern-lying Zürich via Bern and Sitten along the A1 and A9. From 598 km distant Munich, you can make your way to Veysonnaz via Zurich and Bern. In Switzerland, you must have a vignette/toll sticker for your car. When coming by train, change from Sitten Central Station to the post bus (No. 363), which will take you to Veysonnaz. The nearest aurports are in Sitten and in Bern (165 km north). The La Printse ski area has received four stars for its arrival possibilities.