Olympiaregion Seefeld was formed in 2003 through the merging of five municipalities into a common tourism organisation. It offers a total of 37 km of piste and 279 km of cross-country tracks for winter sport activities. The region has been host to both Olympic and world cup competitions, and its main town is the elegant and traditional town of Seefeld, located at 1,180 metres above sea level.

The Olympiaregion Seefeld ski area is a union of tourist municipalities, located at between 964 and 2,064 metres above sea level. The region has hosted both Olympic and world cup competitions, and its main town is Seefeld in Tirol, located at 1,180 metres above sea level. Further resorts in Olympiaregion Seefeld include Leutasch, Reith bei Seefeld (1,130 m), Scharnitz (964 m) as well as Mösern (1,206 m) and Buchen (1,300 m), with the last two actually belonging to the municipality of Telfs. Olympiaregion Seefeld is famous for its many sunshine hours, and offers 28 modern lifts and comprises the Seefeld plateau at 1,200 metres above sea level, the Leutasch valley at between 1,100 and 1,200 metres as well as Scharnitzer Becken. An impressive panoramic view awaits visitors to the region: the Wetterstein mountains with its highest peak Zugspitze (2,962 m) to the northwest, the Mieminger mountains with its main peak Hochplattig (2,768) to the west and, finally, to the east, the Karwendel group with its 125 peaks at over 2,000 m. The nickname of the region – “the Siberia of Tyrol” – owes to the fact that the surrounding high-altitude mountains keep warm foehn winds away. Out of the 37 km of piste offered here, 22 km are marked blue, 13 km red and 2 km black. 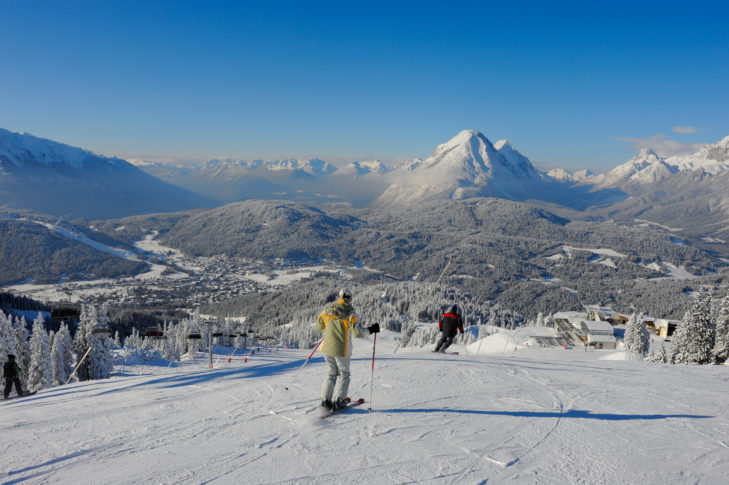 For those longing to snap on their skis or snowboard and head down the slopes again in the evening, night skiing is offered four times per week, between 18.30–22.00, Wednesday through Saturday. Skiing under the starlit sky is possible along a 3 km long floodlit piste, starting at the Rosshütte-Seefeld mountain station.

Moreover, the ski area is a real hotspot for cross-country skiers, offering a total of 279 km of multiple award-winning tracks, some of which are night trails, dog trails or dog-sled trails. Olympiaregion Seefeld has been awarded the cross-country quality seal of the state of Tyrol. Criteria for being awarded the quality seal includes having a snow depth of at least 10 cm during at least 80 days of the winter season. The average snow depth is 63 cm at the mountain station and 33 cm at the valley station. Owing to its high snow-reliability and its modern lifts, our team of experts has given the Olympiaregion Seefeld ski area four stars in the top rating categories of “Reliability for snow” and “Lifts & cable cars”.

Sunny and snow-reliable Olympiaregion Seefeld offers alpine skiers a total of 37 km of piste and 28 lifts. A recommendation for skiers with some experience is to take the Standseilbahn lift from Seefeld in Tirol to Rosshütte (1,762 m), and then continue with the Seefelder Jochbahn lift to the Seefelder Joch (2,060) where the starting point of a valley run is located. Also accessible from here are a number of unprepared pistes and freeride- and deep-snow runs. Several freeride runs can also be found at the Härmelekopf peak (2,224) in Karwendel. The Gschwandtkopf peak, measuring 1,495 metres above sea level, belongs to the Mieminger mountain range and makes for an ideal starting point for beginners. Chair lifts and tow lifts take skiers to the peak from Seefeld and Mösern. Along with the many easy pistes, there is also a demanding FIS race slope for slalom and giant slalom. At the northern foot of the mountain, the “Toni-Seelos” Olympic ski jumping hill is located, named after the legendary skier Toni Seelos. Our experts have given the ski area a maximum five star rating in the “Beginners” category.

The ski school in Seefeld has a long tradition and is a real paradise for children, offering all sorts of winter sport activities for children, with everything from “Gizzis Kinderclub” for 2 to 3 year olds to youth ski classes. Our expert team has given the area a rating of four out of five stars in the “Families & children” category. 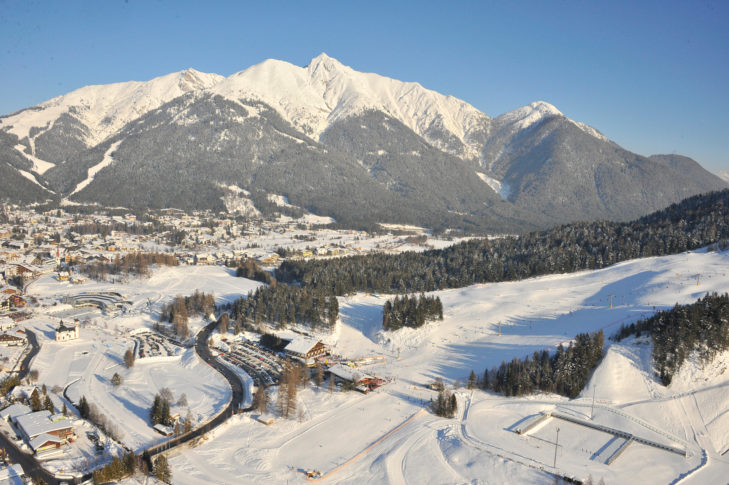 © Olympiaregion Seefeld
The lower areas of the pistes offer plenty of space for children to learn to ski.

The area around the Rosshütte is the place to be for snowboarders and freestylers. Here, fun-loving enthusiasts can enjoy the “Crazy Hole” fun-boarderpark with its two quarter pipes, a jump combination, three banked turns, rails and camel twins. Our team of experts has given the snow park a three star rating.

The five out of five star rating in the “Cross-country facilities & trails” category is undoubtedly well deserved. The Olympiaregion Seefeld ski area is a real hotspot for fans of cross-country skiing. The 279 km of track, for both skating and classic skiing, offer a unique experience in all difficulty levels. One of the tracks, the demanding C2 track “Wildmoos” is a must for advanced skiers. It starts and ends in Seefeld, has a length of 4.9 km, and a height difference of 145 metres. The track is accessible from “Seekirchl”, Casino Arena and the Wildmoosalm, the latter also offering a convenient place to stop and rest and have a snack.

The B4 track “Skatingzentrum” has an intermediate difficulty level and measures 1.2 km with a height difference of 42 metres. It starts and ends in Leutasch, and access to the track is also possible from the Moos parking lot. A less demanding alternative is the A7 track “Gasse”. Measuring 4.7 km and with a height difference of 27 metres, its start- and end-point is the Leutasch cross-country centre, with further access points in Alpenbad, Bogen and the Leutasch football field parking lot.

Those looking to enjoy some toboggan family fun in the snow will have plenty of opportunities in the Olympiaregion Seefeld ski area. Eight natural toboggan runs are located in the Karwendel mountains around Seefeld, some of which also offer night-time tobogganing.

Further highlights during the winter season include the annual Nordic Combined world cup competitions, and the “Kaiser-Maximilian-Lauf” ski marathon, both taking place in January, and the international cross-country festival “Euroloppet Ganghoferlauf Leutasch” in March.

Our experts have given the Olympiaregion Seefeld ski area an overall rating of 3.6 stars. The high snow reliability and the modern lifts are the two top categories. Moreover, the region offers excellent conditions and facilities for cross-country skiing, and accordingly, our experts have given “Cross-country facilities & trails” a maximum five stars. The area can also boast a maximum rating in the “Beginners” category. The “Families & children” and “Getting there & parking facilities” categories have each been given a four star rating. 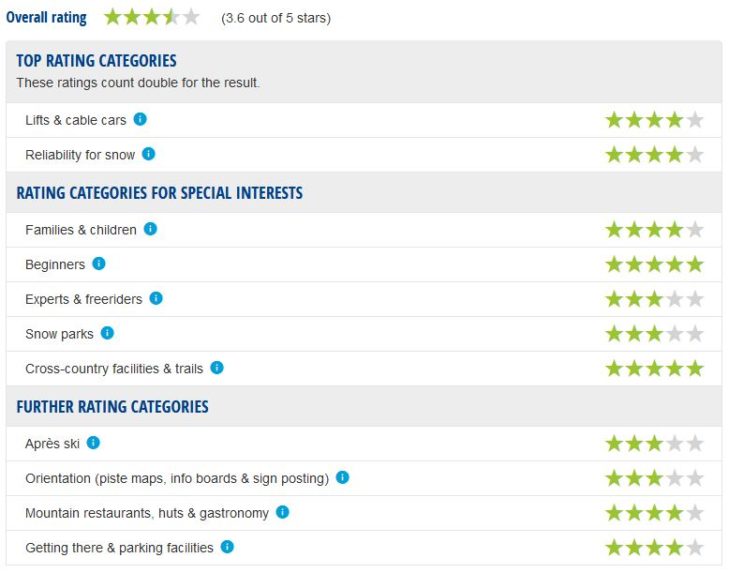 Visit SnowTrex for the current status and further information

5) Activities outside the slopes

The Olympiaregion Seefeld ski area offers first-class culinary experiences, and unsurprisingly, our test group have been generous with the stars in the “Mountain restaurants, huts & gastronomy” category, giving it a solid four. The “Feine Weine” restaurant in Landhaus Marie in Leutasch offers delicious wines and regional specialities. Further recommendations include “Bella Vista – Zum Kirchplatzl” in Scharnitz and “Beisl Bar” in Seefeld.

Those looking to party and enjoy lively après ski with classic après ski music should definitely visit the “Rosshütte”, the “Siglu Bar” or the “Parkcafé” at the “Hotel Klosterbräu & SPA” in Seefeld. In the “Jeep & Buffalo” fun-disco, the party goes on until the early morning hours. Further places to go are “Pointbar” and “Fleedermausbau”, in the Seefeld pedestrian zone. The après ski in Seefeld has been given a three star rating by our expert group.

A real treat for fans of biathlon in the Olympiaregion Seefeld ski area is the biathlon arena, built in 2010. It is Europe’s largest of its kind, and boasts ideal training conditions with a total of 35 shooting ranges. Further, the arena offers professional classes for beginners of all ages are. 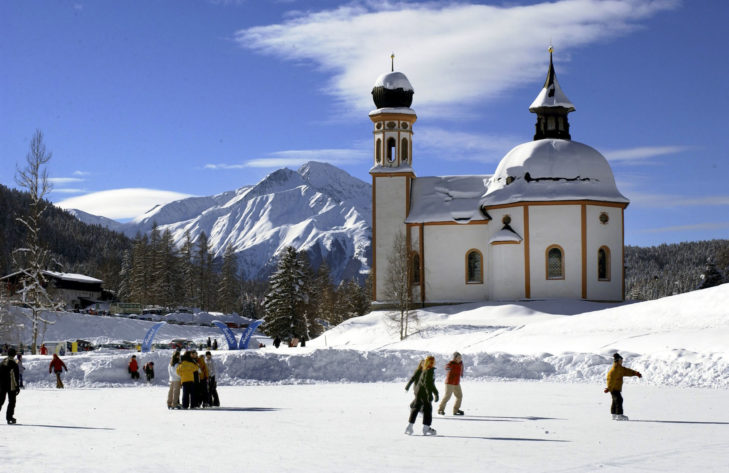 © Olympiaregion Seefeld
The family friendly ice skating rink in Seefeld is located in a beautiful spot.

The numerous activities offered outside the pistes include guided snowshoe tours, ice climbing, dog sled workshops, ice skating and winter golf. If you would like an introduction to the world of Bavarian curling, you can sign up for a free lesson with professional instructions, including rules of the game and technique.

For relaxing moments, we recommend visiting the Rosshütte valley station, where you can use the free Wi-Fi connection to keep in touch with friends and family back home.

6) Resorts in the ski area

Seefeld is located at an altitude of 1,180 metres, between the Wetterstein mountains and Karwendel. It is one of the members of the “Best of the Alps” group, which consists of 11 unique destinations. The characteristics shared by these destinations include natural luxury, impressive mountaintops and a high number of international visitors. Seefeld is a large resort, but has managed to keep its traditional atmosphere. Ever since the 14th century, it has been an official pilgrimage site. The oldest pedestrian zone of Tyrol is home to the famous “Casino”, numerous luxurious boutiques and a diverse range of gastronomical experiences.

Leutasch is located at 1,136 metres above sea level in the valley of Leutaschtal. The peaks of the Arnspitze mountains (1,616 to 2,196 m), Dreitorspitze (2,633 m) and Hochwanner (2,744 m) – Germany’s second highest peak after Zugspitze – make up the picturesque surroundings around Leutasch. The calm holiday resort with its village charm focuses on attracting seniors and families with children. Visitors have a range of restaurants and guesthouses to choose from. Fun fact: a part of the famous Camino de Santiago pilgrims’ way leads through Leutasch.

7) Getting to the Olympiaregion Seefeld ski area

Getting to the Olympiaregion Seefeld ski area by car is possible from all directions. From the north, the best route to Seefeld is driving through Munich, Garmisch-Partenkirchen and Mittenwald. Coming from the east or the south, driving through Salzburg and the A13 Brenner motorway, Innsbruck and then taking the Zirl exit over Zirler Berg would be your best option. From the west, the best route leads through Kempten, Füssen, Reutte and Imst, finally taking the Telfs-Ost exit.

Do you want to keep up-to-date with current weather conditions in the ski area? SnowTrex offers information on weather, snow depths, and webcams.