Ski Areas SnowTrex Employees On The Go: Travelogue from Mayrhofen

SnowTrex Employees On The Go: Travelogue from Mayrhofen

Our colleague Christina enjoyed a long weekend of spring skiing in Mayrhofen. Her conclusion: Even in March, the Mayrhofen ski area is a great destination! We’ve got the report about Mayrhofen in Zillertal for you here: Pistes and combination lift at the action mountain Penken.
Index
The Selection of Pistes in the Mayrhofen Ski AreaRecommendations for Taking a BreakAprès Ski in MayrhofenPersonal Conclusion

The Selection of Pistes in the Mayrhofen Ski Area

“We were on the road with a group of 17 people in total: my boyfriend and I, plus some friends with a total of five toddlers. Our group consisted of skiers of different levels, from beginners to really good skiers. Nevertheless, there was something for everyone. A friend even put his two-and-a-half-year-old son on his skis for the first time – super cute! I’m more of a leisure skier myself and mostly ski at a medium pace. My boyfriend, on the other hand, is more of the ‘racer’ type and took his speedometer with him on every run. Mayrhofen was a suitable terrain for all of us.

We spent a total of four nights there, so we had three days of skiing. Since we lived in the centre of Mayrhofen and our friends were close to the Horbergbahn lift, we took the Penkenbahn lift to the ski area, skied a run get used to it again, and then headed over to the Horbergbahn lift – an ideal meeting point, as you can quickly get to the Penken lift from here, but also to Tux, for example”. “My tip: Take the ‘150er Tux Pendelbahn’ lift from Horberg to Tuxertal to explore the Eggalm ski area. Here, it is worth stopping at the ‘Vogelnest’ umbrella bar. Return to Mayrhofen via the medium-difficulty ‘Route 66’. Another highlight – and not to be forgotten – is the ‘Harakiri’ piste. This difficult run is located on the Penken and is the steepest run in the ski area with an extreme decline. I didn’t ride it, but my boyfriend was really thrilled about it!” At the top left of the picture, you can see the extremely steep Harakiri piste.

Recommendations for Taking a Break

“For the lunch break, I can highly recommend the ‘Tappenalm’ between the Penken and Horberg mountains. It is in a top location in the middle of the piste with a great view over the Horberg valley and the surrounding pistes. The hut serves the tastiest roast potatoes with bacon and eggs – definitely worth a try! The Tappenalm can be reached from the Horberg via the ‘Tappenalm’ chair lift, from where a beautiful, wide blue piste leads to the snack station”. © VVO/shutterstock.de
Mayrhofen offers beautiful huts that are perfect for a quick break.

“Of course, you can’t avoid partying after the lifts close if you’re skiing in Mayrhofen. Before returning to the valley, it is advisable to drink one or two beers at the ‘Elchbar’ (directly at the Penkenbahn lift) and wait until most of the people are gone. If you prefer to go straight home, you can also take the Horbergbahn lift down and then the ski bus to Mayrhofen. That goes really fast. Right at the valley station, next to the Penkenbahn, is the ‘Ice Bar’, which is highly recommended if you like après ski. Those who are still hungry after the last descent should eat a schnitzel or ‘Leberkäsbrötchen’ (meatloaf sandwich) in the ‘Metzgerei Gasser’ butcher shop (directly opposite the valley station). Delicious! Also, the Yeti Bar directly at the Horbergbahn lift is to be recommended, as a mixed crowd and good DJs regularly play here”. 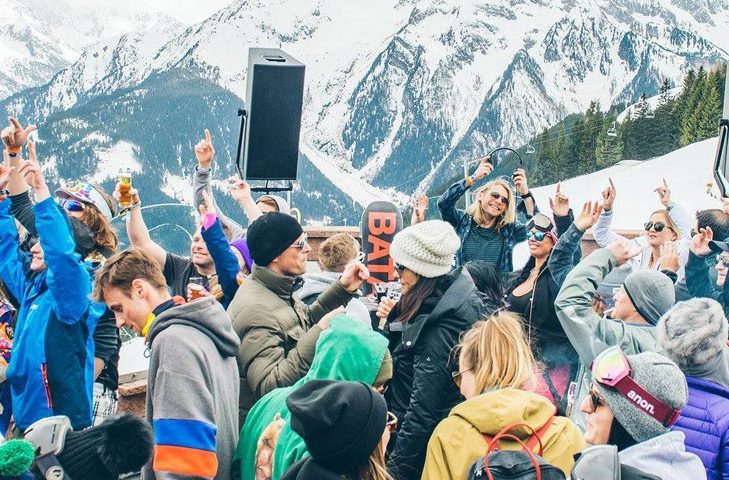 © Pilzbar
A relaxed atmosphere is guaranteed in the après ski bars in Mayrhofen.

“I was pleasantly surprised by the Mayrhofn ski area. I had expected an overcrowded area with long waiting times at the lifts, but I learned otherwise. In the morning, we only had to wait a short time until we could get on the Penkenbahn lift. I was also amazed about the very reasonable prices for après ski, because Ischgl and similar ski areas are used to a different kind of budget. It’s great that Mayrhofen doesn’t push the prices so high.

Finally, I can say: Mayrhofen is a very diverse ski area with simple blue, but also many red slopes in the midst of a breathtaking Alpine panorama, where I will definitely go skiing again”.

Now that you’ve read through the travel report, fancy a ski holiday in Mayrhofen?