At the Passo del Tonale (Tonale Pass) is the setting for a spectacular winter wonderland – the Adamello Ski area in Trentino and the Adamello-Brenta Nature Park. At an altitude between 1,121 m and 3,016 m, this skiers’ paradise offers snow-sure pistes. The “Adamello Ski” pass gives holidaymakers access to 100 km of pistes and 21 km of cross-country ski trails, while other ski pass deals like the “Skirama Dolomiti Adamello-Brenta” offer 380 km of pistes. 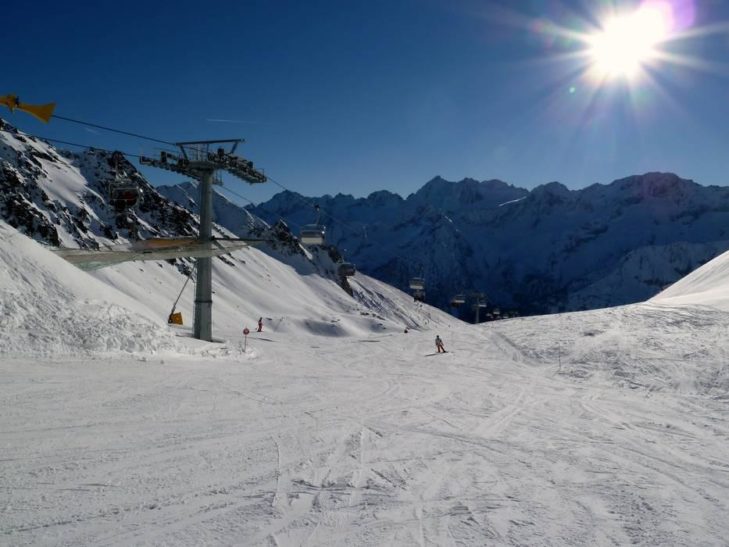 The Adamello ski area, with guaranteed snow, stretches around the Italian Passo del Tonale (Tonale Pass), which lies 1,886 m above sea level. At altitudes between 1,121 m and 3,016 m; 30 lifts in the form of four cable cars, seven tow lifts and 19 chair lifts lead to the perfectly-maintained slopes of the Adamello ski area in the Trentino Val di Sole. The 22 blue, 63 red and 15 black km of pistes, mean there are around 100 km of pistes in total for skiers to enjoy.

The Val di Sole lies east of the Tonale Pass in the Adamello-Brenta Nature Park. Cross-country skiers enjoy its scenic beauty and the 21 medium-difficulty km of cross-country trails in the Adamello ski area. The “Adamello Freestyle Arena Passo del Tonale” snow park gives freestylers 600 m of fun, with two areas and 25 obstacles to master. Speed demons can measure their time in the 1 km Ski Cross area. 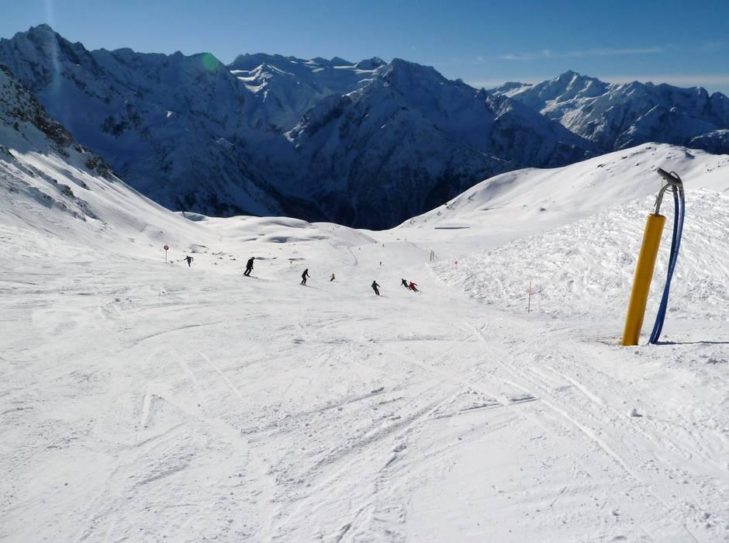 Every day from February to April, winter holidaymakers will get around seven hours of sunshine at the Trentino Passo del Tonale. There is an average snow depth of 40 cm at the valley station and 120 cm at the mountain station, and together with the modern snow-making systems, this guarantees a high level of snow in the Adamello ski area.

The two top rating criteria, “Lifts & cable cars” and “Reliability for snow”, are weighted twice in the overall ratings. The two categories received 4 and 5 of a possible 5 stars in the evaluation by experts. 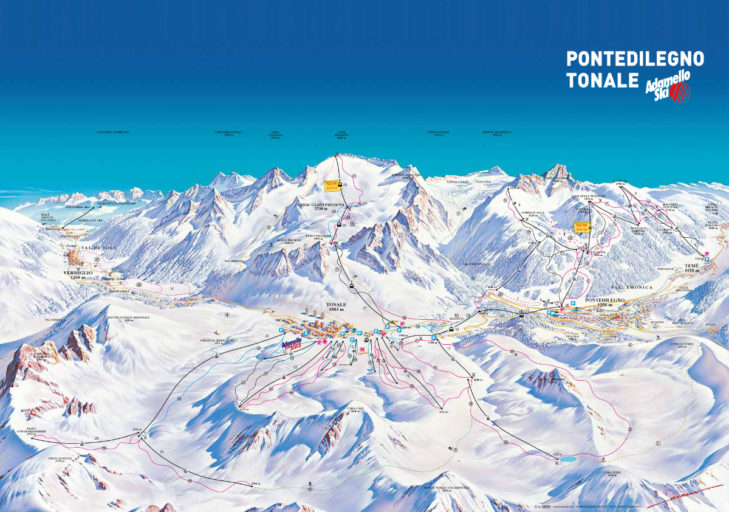 3) Skiing in the Adamello ski area

Anyone wanting to learn to ski, refresh their skills or discover a new winter sport should get in contact with the ski and snowboard instructors of the “Scuola Italiana Scii Tonale Presena” ski and snowboarding school. They organise individual and group lessons in Alpine skiing, snowboarding, as well as lessons in freestyling, freeriding and backcountry courses.

Winter sports fans who like to pack light can rent high-quality equipment for skiing, snowboarding and cross-country skiing easily on site. At Passo del Tonale, guests can reserve equipment in advance at one of the ski rental stations.

While the adults are happily making their way down the pistes, children are in good hands in the “Fantaski” children’s area. The fenced-in ski school has practice pistes and is equipped with conveyor belts and child-friendly exercise equipment. It is a safe area for children to discover the joy of skiing playfully with the help of ski instructors. Children’s entertainment, bouncy castles and tunnels also ensure that the little skiers have a fun time. With the Skirama Dolomiti Adamello-Brenta ski pass, families can enjoy the “Folgarida”, “Marilleva” and “Daolasa” family parks; the  “Pejo Kinderland”; the “Biancaneve” and “La Bruscadela” snow parks; the “Marilland” baby park; the “Folgarida Kinderland”; and the children’s land in Folgarida. There are great family deals on offer, and this is one of the reasons the Trentino’s ski areas are so popular. 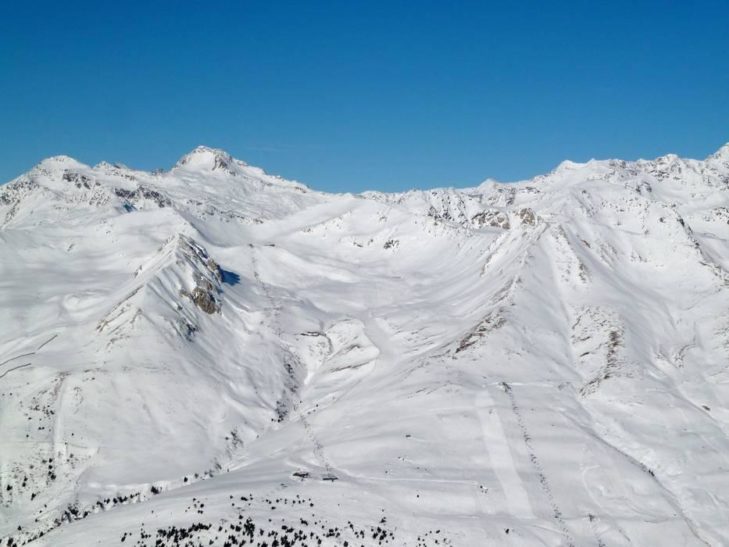 Cross-country skiers can glide over 22 km of trails in the Adamello ski area. The Val di Sole has 45 km of perfectly-groomed cross-country trails for winter sports fans. In the cross-country skiing centres in Vermigli and Rabbi, there are ski instructors, rental stations, changing rooms and manicured pistes of various degrees of difficulty for holidaymakers to discover.

Snowboarders and freestylers will find their favourite spot along the 600 m long “Valena” chairlift route with the “Adamello Freestyle Arena Passo del Tonale” snow park. With its 25 obstacles, it is situated on a sunny southern piste and is reshaped and maintained every day. Halfway along its two areas there is a chill-out area with music which is a perfect spot to take a break.

The black “Paradiso Tonale” piste is considered the most exciting downhill run at the Tonale Pass. It starts at an altitude of 2,587 m and goes to 737 m over 3 km. Skiers and carvers will discover the longest descent in the Adamello ski area on the 11 km “Presena – Ponte di Legno” piste. It leads from the top of the 3,016 m high Presena glacier to the black Paradiso Tonale piste and over the red “Pegra” piste to the valley and has an altitude difference of 1,800 m. 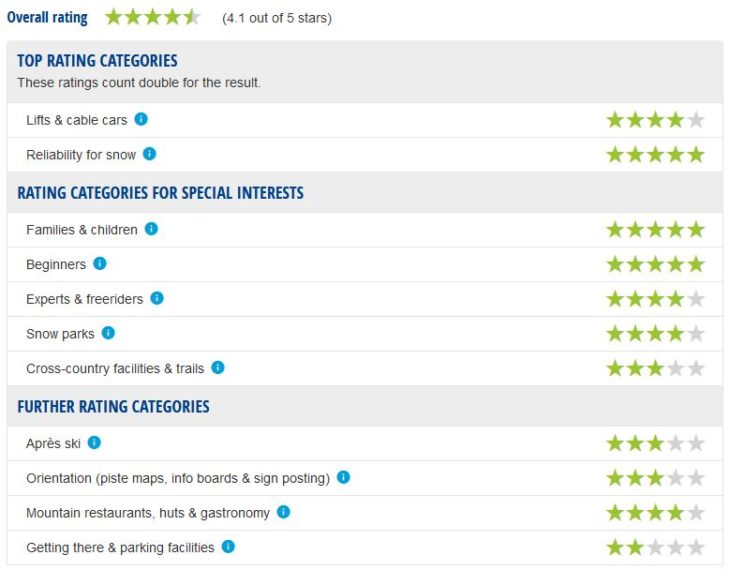 A horse-drawn sleigh ride is an unforgettable way to discover the Adamello-Brenta Nature Park. The equestrian stable Centro Equitazione Alpina Val di Sole regularly offers the opportunity to do so. “Huskyland Scuola Italiana Sleddog”, as the name might suggest, gives holidaymakers the chance to be pulled by a pack of huskies on a sleigh through the fantastic winter landscapes of the Val di Sole. 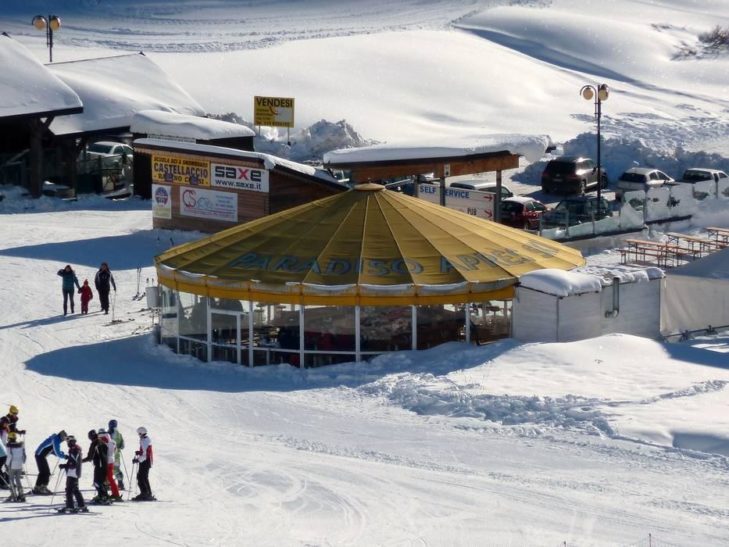 Around 20 ski huts and mountain restaurants in the Adamello ski area invite holidaymakers to take a refreshing break with regional specialities. Among the most beautiful locations are the Bar-Ristorante Rifugio Nigritella, the Magic Pub Ski Burger, the Ristorante-Bar Bleis, the Serodine and the Passo Paradiso.

The Adamello ski area has been awarded 3 stars in the “Après ski” category by our experts, while “Mountain restaurants, huts & gastronomy” received 4 stars.

6) Locations in the Adamello ski area

The Passo del Tonale (Tonale pass) runs as a natural border between eastern Trentino-South Tyrol and western Lombardy. The 1,180 m high pass connects the Lombard Valcamonica valley with the Trentino Val di Sole. It is surrounded by the mountain ranges of the Ortler group, the Brenta Dolomites and the Adamello-Presanella group, famous for their magnificent ski areas. Not far from the Tonale Pass holidaymakers can visit the remains of a fort from the First World War. 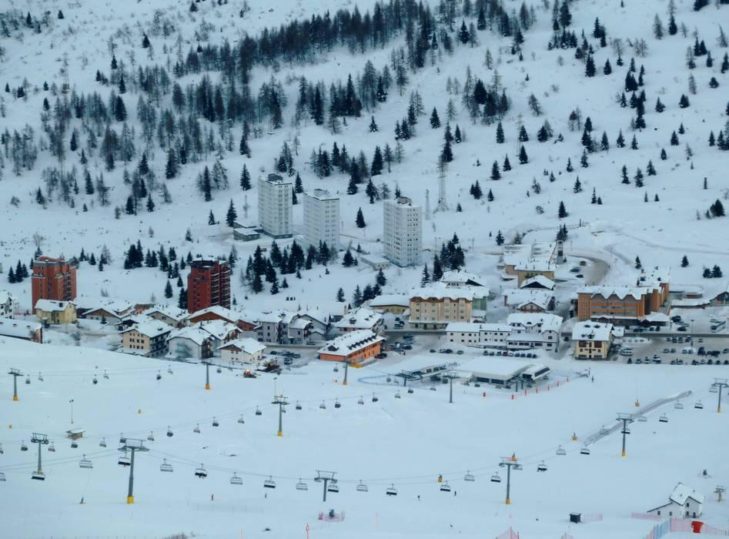 © skiresort.de
A view of the valley.

7) Arrival in the Adamello ski area

The Italian Adamello ski area is located 87 km northwest of the Trentino capital Trento and 112 km southwest of Bolzano. When arriving from Germany, holidaymakers should pay attention to motorway rules in Austria.

Bus lines 646, 645, 700 and 302 via Fucine, Mezzana, Trento and Rosmini/S. Maria Maggiore connect Passo del Tonale to Trento main train station. Buses 646, 645 and 700 take holidaymakers from Passo del Tonale via Fucine and Mezzana to Mezzocorona Ferrovia, where a connecting train runs to Bolzano. The main train stations of Trento and Bolzano are connected to key European train stations. The FlixBus runs from numerous major German cities to Bolzano and Trento. There are direct FlixBus connections from Berlin and Leipzig to Trento. From Frankfurt, the FlixBus runs via Nuremberg and Munich. From Stuttgart it also goes via Munich to Trento. There is another connection by FlixBus from Munich via Innsbruck to Bolzano.

The nearest airports are Bergamo and Verona, 130 km and 180 km away respectively. From Bergamo airport, holidaymakers can reach the Passo del Tonale by bus in 5 hours, via a single change at Ponte di Legno. From Verona airport, Trento is reachable by bus or train with a single transfer. From there a bus will head to Passo del Tonale. SnowTrex experts have rated the category “Getting there & parking facilities” with 2 stars.