Bad Kleinkirchheim/St. Oswald is in the middle of the Nockberge National Park in Carinthia. Winter sports fans can expect varied pistes and a network of groomed cross-country ski trails. But there is more to this magical place: nature lovers will find enchanting hiking trails in an untouched landscape and enjoy panoramic views that are second to none. 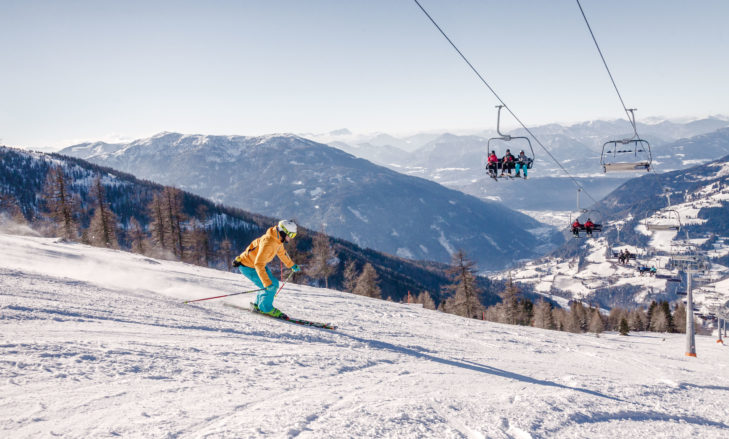 The Bad Kleinkirchheim/St. Oswald ski area is located in Austria’s southernmost province of Carinthia. The area lies in the cross-border ski region of Carinthia and East Tyrol. Skiers will find 103 km of pistes in the Nockberge National Park. Of these, 18 km are blue, 77 km are red, and 8 km are black pistes. A total of 28 lifts, including 17 tow lifts, seven chair lifts and four cable cars, take winter sports fans from the respective valley stations to the mountains. SnowTrex experts have awarded 3 stars in the category of “Lifts & cable cars”. Due to the altitude between 1,001 m and 2,055 m, snow is guaranteed throughout the entire season. The 400 m long floodlit piste, which makes skiing possible in the evening too, is a unique experience not to be missed. 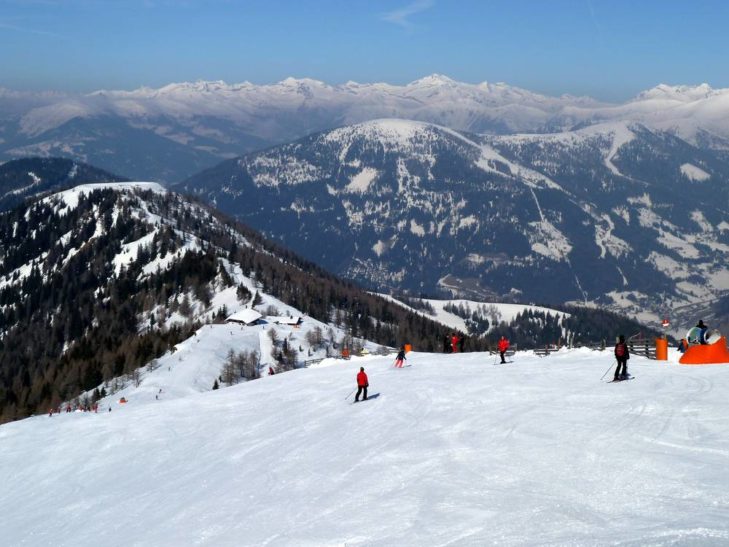 Skiing and wellness go hand in hand at Bad Kleinkirchheim. The ski pass is valid either for a day on the pistes or an all-day stay in the Römerbad thermal spa. With the “TopSkiPass Kärnten & Osttirol GOLD” visitors can explore new pistes in 24 ski areas in Carinthia and seven ski areas in East Tyrol, a total of about 853 km of pistes.

In the Bad Kleinkirchheim/St. Oswald ski area, the sun shines for an average of 3 to 6 hours in the winter season. The region enjoys 6 to 10 days of snow. The snow depths at the valley stations vary between 15 cm and 45 cm and at the mountain stations between 25 cm and 85 cm. Artificial snow machines ensure absolute snow reliability and perfectly-groomed pistes. SnowTrex experts have awarded the category of “Reliability for snow” with 4 stars. 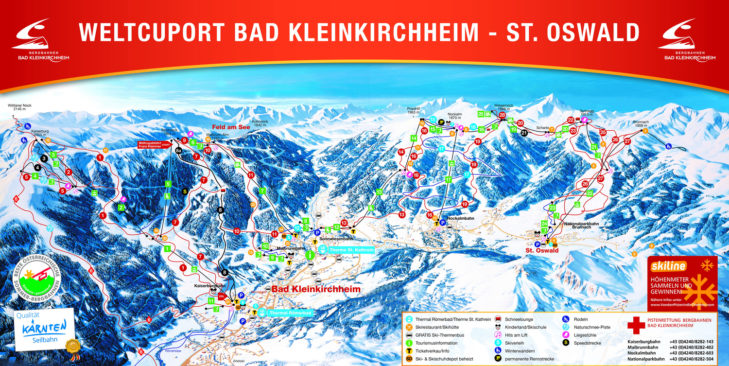 In the Bad Kleinkirchheim/St. Oswald ski area, there are 103 km of pistes of varying degrees of difficulty. Here every skier, from beginners to professionals, will find their perfect conditions for alpine skiing.

The pistes on the Kaiserburg, Brunnach and Nockalm are extremely wide, ideal for both skiing and snowboarding. There is a boardercross track at the Kaiserburgbahn. Freeriders and powder snow skiers will find their terrain at the mountain stations of the Mulde and Hirschsprung lifts.

Ideal for carving and well-suited for beginners and re-starters are the wide pistes of the Nock Mountains, which lies above St. Oswald. A unique challenge for experienced skiers is the 3.2 km long World Cup Klammer descent. For those who want to go down the piste again in the evening, there is a 400 m long run with floodlights at the Sonnleiten lift.

For lovers of Nordic skiing, the Bad Kleinkirchheimer Tal offers beautiful routes. Particularly recommended for ambitious cross-country skiers is the Roman cross-country trail which is approximately 8 km long and runs through the Nock Mountains at an altitude of between 1,500 m and 1,180 m.

The Bad Kleinkirchheim snow park provides a lot of fun in the snow. A lift in the park takes freestylers to optimal height. The park is situated on a sunny piste near the Nockalm cable car. There are beginner areas and routes for experts. Various boxes, rails, tubes and kickers guarantee a shot of adrenalin. A special Kids Slope has also been designed for the little ones. The family-friendly facilities are why SnowTrex awarded an impressive 5 stars in the “Families & children” category. 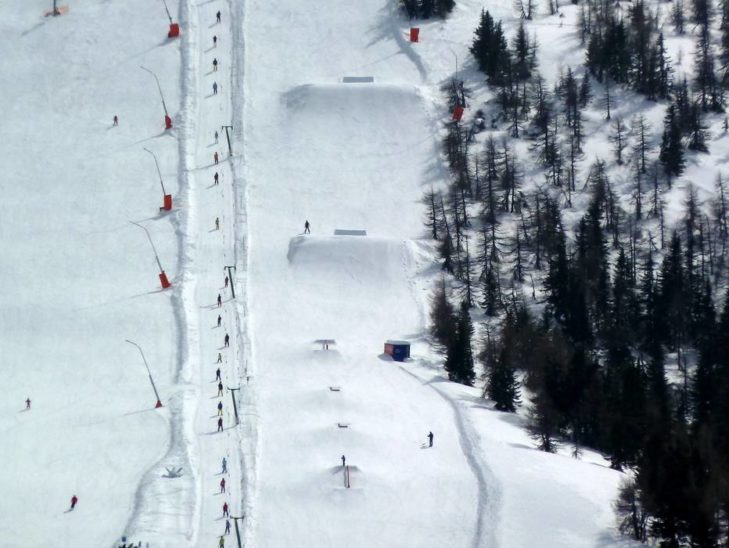 St. Oswald and the Nockalm Road are the starting points for two ski tours that offer an extraordinary experience. The tour to the Steinnock begins in St. Oswald and scales 864 m of altitude difference and a distance of almost 10 kilometres. Visitors can get to the starting point free of charge with the Ski-Thermen-Bus. The second route starts at the Innerkrems toll station. It is also about 10 km long and scales 746 m in altitude. At the end of each tour there is the descent over manicured downhill pistes into the valley of Bad Kleinkirchheim/St. Oswald.

With 3.8 out of a possible 5 stars, our experts rate the ski resort Bad Kleinkirchheim/St. Oswald above average. The rating includes the top rating criteria, the evaluation criteria for other interests and other evaluation criteria. Bad Kleinkirchheim received the highest rating of 5 stars twice. The experts considered “Mountain restaurants, huts & gastronomy” as excellent. In addition, “Family & children” also receives the best rating with 5 stars. 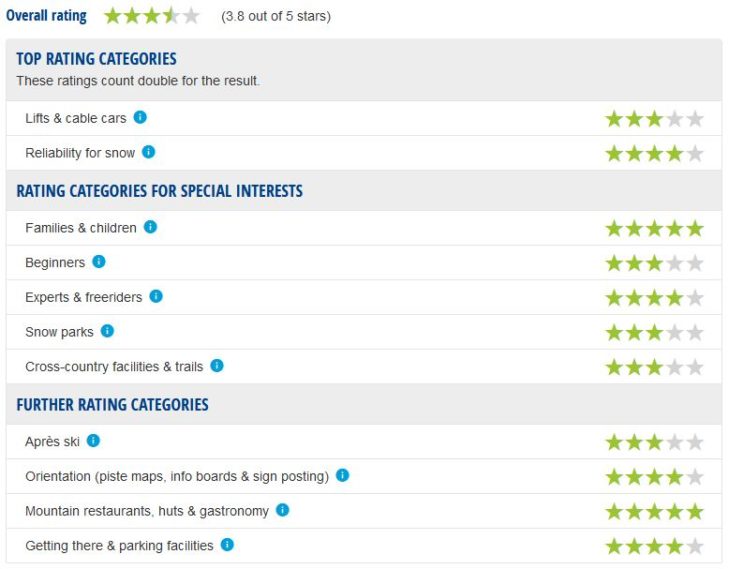 The après ski scene in Bad Kleinkirchheim/St. Oswald is as varied as the pistes. The ski huts where holidaymakers can unwind have an old-world romantic charm. The “Waldtratte” at the middle station of the Kaiserburgbahn, the “Brentlerhütte” at the Priedröfpiste and the “Unterwirthütte” at the Maibrunn downhill run are all extremely cosy; while the “Nock IN” at the top station of the Brunnach National Park cable car offers modern comfort. The “Oswald Platz” in St. Oswald has a rather quiet and cosy atmosphere. Various umbrella bars such as the “Victoria Pub” at the Kaiserburgbahn are also popular places to go. SnowTrex experts awarded 3 out of 5 possible stars for the après ski scene in Bad Kleinkirchheim. The varied cuisine in Bad Kleinkirchheim received 5 stars. “Landhaus Stüberl”, the “Dorfwirt” and “Bockhütte” in St. Oswald, all – like most restaurants here – serve delicious local specialities.

Bad Kleinkirchheim was recognised as one of the first wellness resorts, and visitors can use their ski pass to check out the Römerbad-Therme. Mineral spring water from the Nock Mountains fills the spa, and the water temperature is a pleasant 30 °C. The spa is built on 12,000 square metres over three levels. It offers pure relaxation for bathers with its varied sauna and wellness features and boasts exceptional views of the surrounding mountains.

Away from alpine and Nordic skiing, the Bad Kleinkirchheim/St. Oswald ski region also offers other sporting activities. Snowshoe hikes, horse-drawn sleigh rides through the winter landscape or fun on one of the four toboggan runs provide fun for the whole family. 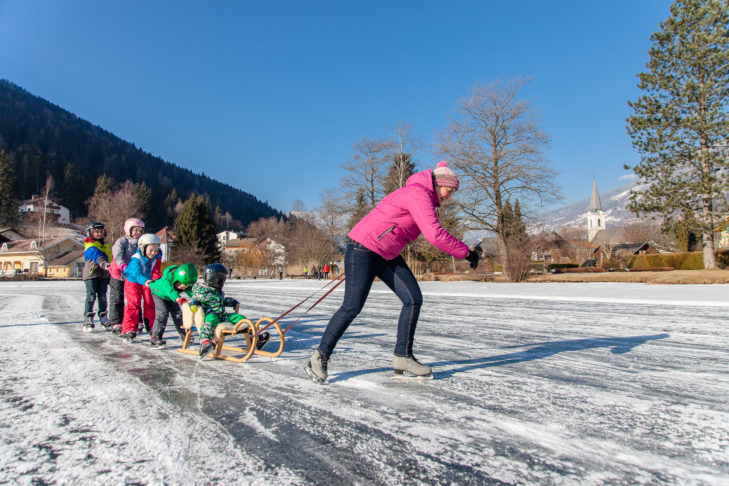 There are also several ice rinks available. Visitors can also take part in organised dog sleigh rides through the winter landscape. A hike through the Nockberge National Park is a great way to relax and unwind. There are numerous hiking trails here, which are ideal in winter.

As early as the 17th century, the first bathers came to Bad Kleinkirchheim. In 1977 the town was officially recognised as a spa. Throughout the year Bad Kleinkirchheim is one of the 20 most-visited places in Austria. The tourist winter sports business started in the 1950s and had been continuously expanded and modernised ever since. St. Oswald, like the Kastralgemeinde Zirkitzen, is a district of Bad Kleinkirchheim which belongs to the Spittal an der Drau region in Carinthia. While the urban development of Bad Kleinkirchheim is now mainly focused on tourism, St. Oswald has retained its original rural character. Some traditional farms can be visited here.

Spittal an der Drau is about half an hour’s drive away. Numerous small shops in the historic city centre tempt visitors to shop here. But Spittal also has a lot to offer culturally. Porcia Castle, for example, is one of the most important Renaissance buildings outside Italy. The “Bezirksheimatmuseum” is worth a visit, it houses one of the four largest folklore exhibitions in Austria with more than 20,000 exhibits.

A short drive from Spittal an der Drau is Lake Millstatt. Here, the Torture Museum in the Sommeregg castle is a macabre favourite. Far Eastern relaxation can be found in the Bonsai Museum with its attached Zen garden, which is also exceptionally charming in winter.

In Austria, toll stickers are compulsory on all motorways, urban motorways and specially-marked expressways. Exceptions are motorways and other routes on which a particular toll is levied. The “Pickerl”, as the toll sticker is called in Austria, is available with different validity periods of 10 days, two months or a whole year. During the winter season, some passes are not passable, for others snow chains are mandatory. Suitable winter equipment is therefore always necessary for a skiing holiday in Bad Kleinkirchheim/St. Oswald.

The journey by car from Germany is via the motorway from Munich in the direction of Salzburg, then the special toll Tauernautobahn A10 up to the Milstätter See exit. From here the B88 goes directly to Bad Kleinkirchheim.

Alternatively, car drivers from Germany can choose to travel via Munich, Salzburg and Bad Gastein to the Böckstein car loading station. Take the car-train through the tunnel to Mallnitz, then take the A10 and B88 to Bad Kleinkirchheim.

The nearest railway station is Spittal an der Drau, about 30 km away. From Spittal, there is a regular bus service to Bad Kleinkirchheim. The journey takes just under an hour.

If arriving by plane, it is advisable to fly into the state capital, Klagenfurt, which is about 55 km away from the ski area Bad Kleinkirchheim/St. Oswald. There is also a bus connection here. However, the journey (including transfer) takes more than three hours. Alternatively, car rentals are available at the airport. The drive from the airport to the winter sports resort takes about 50 minutes.