Skiing on altitudes of more than 3,000 m with a dreamlike panoramic view and a large variety of pistes – winter sports fans have a lot to look forward to in Les 2 Alps, one of the highest located glacier ski areas worldwide. 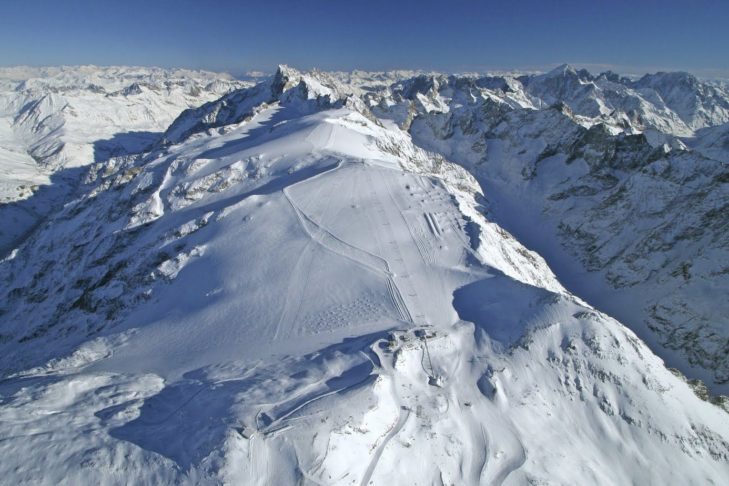 The ski area Les 2 Alpes is located in the region of Oisans, i.e. in a part of the French High Alps that goes up to more than 4,000 m. With its 225 km of piste, the largest part of which is located on more than 2,500 m, Les 2 Alpes is one of the most popular ski areas in France. The pistes are on altitudes between 1,280 m and 3,560 m, which gives them a total reliability for snow.

A total of 78 green and blue pistes are available for beginners and pleasure skiers, including the so called “Slow Zone”, in which it is only allowed to ski slowly. With 103 km of red and 44 km of black piste, the options for more experienced skiers are also respectable. Les 2 Alpes is also a dream location for variant skiers, as there are 100 km of ski routes available. 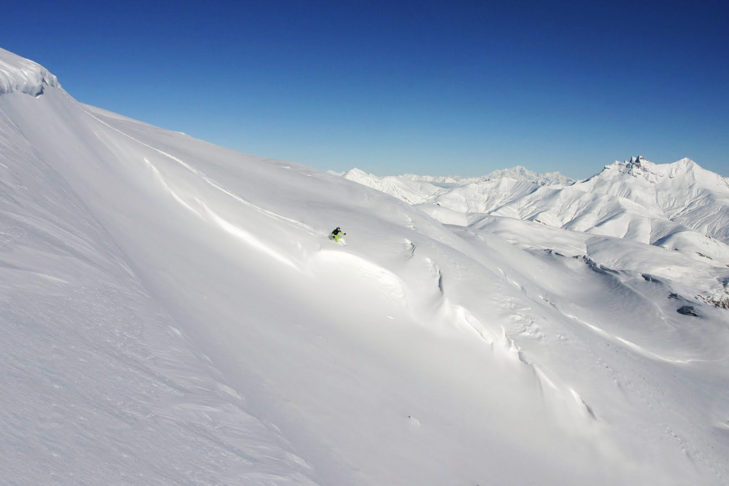 On the glacier on 3,200 m, skiing is possible until the summer months. Up here you can find a large snow park and a super pipe, in which freeriders can look forward to jumps with the most beautiful panorama. There also is a connection to the neighbouring freeride hotspot in La Grave.

Cross-country skiers also get their money’s worth in Les 2 Alpes. On 25 km of trails, cross-country skiing is possible in classic- and partly in skating style.

The fantastic variety of pistes is paired up with very good weather conditions. During the ski season, the ski area is spoiled with rich snow-depths of 121 cm average on the mountain. The sun shines an average of 120 days per season, which is more than in other ski areas in France. December is the sunniest month and has an average of 24 days of sunshine.

Thanks to the glacier and the additional snowmaking systems, the ski area has a very high reliability for snow – and justly rated 5 stars by our experts. The lifts and gondolas also have a good rating of 4 stars. Additionally, SnowTrex labelled the ski area “Best Place to Ski”.

The Les 2 Alpes ski area has many broad and sunny panoramic pistes for every level of skill. In the lower area nearby the resort itself (1,650 m), several practise lifts and very flat, green pistes are available for beginners. The so called “Slow Zone” (French: Ski Tranquille) comprises several pistes throughout the ski area. Here, it is only allowed to ski slowly and with special consideration for other skiers and snowboarders. A special ski patrol even observes the skiers’ compliance with the rule. The Slow Zone -pistes are marked by special signs and can be found in areas such as e.g. Toura, Crêtes and Vallée Blanche. 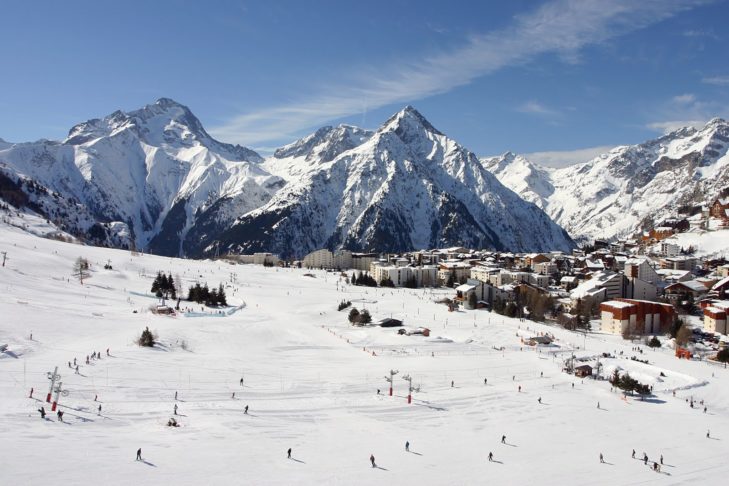 © Nico Lafay
On the lower half of the pistes, there are flat slopes with plenty of room to practise!

All in all, the ski area has many blue slopes. In Toura (2,600 m) and La Fée (2,200 n), you can also find several great red pistes, and, with Fée 6 and Bellecombes 6, two very steep black runs. At the Lutins lift nearby the valley, a 500 m long section is illuminated for night skiing.

The lifts Jandri Express I and II take you from the resort centre up to the glacier on 3,200 m in next to no time. Skiing fun on the glacier plateau has an absolute snow guarantee, and the view from here is simply breathtaking.  Up here, winter sports fans can look forward to a diverse realm of pistes with funslopes, snowpark, photo points and glacier cave. The accessible ice cave has ice sculptures on display and can be found at the Jandri Express’ mountain station approx. 30 m below the glacier. One of the ski area’s six photo points can also be found at the lift station. These photo points serve as selected selfie spots so that you can contribute to the virtual Les 2 Alpes gallery when tagging your pictures #L2A forever.

Another highlight at the glacier is definitely the large snowpark “2 Alpes Freestyle Land”. On an altitude of 2,600 m, you can find a respectable selection of obstacles, jumps and a super pipe. The park also comprises a slopestyle- and a boardercross run, an Easy Park and a Family Park. The cherry on top is a large airbag. It’s absolutely legitimate the snowpark in Les 2 Alpes received a 5-star rating by our experts. From the glacier there is a connection to the popular freeride area of La Grave. The Lauze lift takes you to the mountain crest at Dôme de la Lauze, where off-piste skiers are only transported by snowcats. The descent at the edges of La Meije (3,392 m) in La Grave is very demanding and only suitable for most experienced skiers. 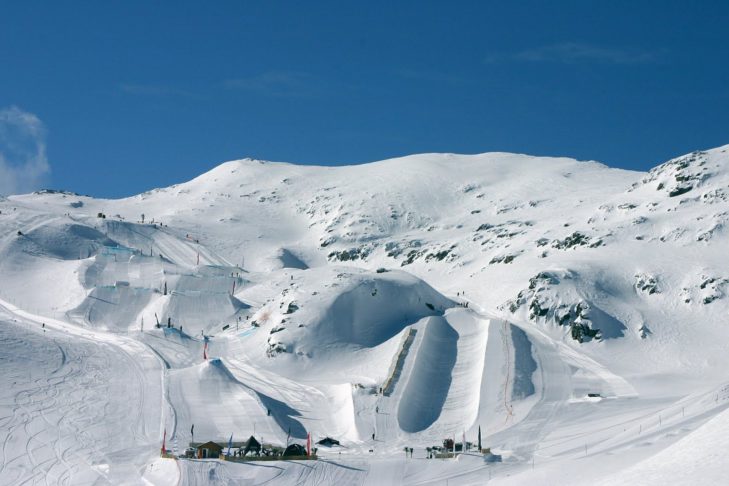 All relaxed skiers who are not necessarily drawn to glacier pistes will find a beginner-friendly alternative in the part of the ski area called Vallée Blanche. The mainly blue pistes here go up to max. 2,100 m and the pistes here are rather easy. Three red slopes and a ski route are available for skiers with higher ambitions.

About a dozen ski huts and mountain restaurants cater for the winter sports fans’ culinary well-being. The numerous sun terraces and umbrella bars, such as the one at Diable au Cœur in the part of the ski area called Le Diable (2,400 m) are the perfect meeting point for a lunch break. 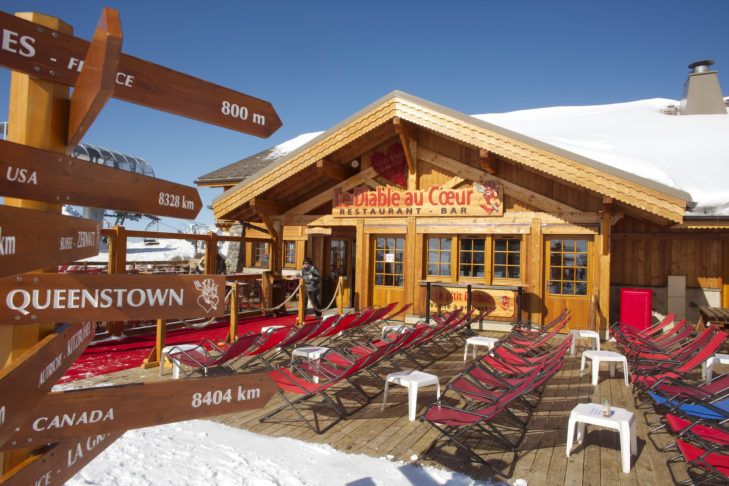 © diable au coeur
Sun terraces like this one can be found all over the ski area.

In general, the range of child care services for families with kids is rather large. Multilingual ski schools and kindergartens, some awarded with the “Famille Plus” label, care for children from 4 years. The Mini Club even takes care of children from 18 months during day time. The children’s area nearby the valley has a covered magic carpet and child-friendly practise slopes, so that children can learn how to ski in a playful manner. Right next to the tourist information at the Jandri I lift is a kids’ play area where children from 1 – 4 years can get to know the fun on the pistes (also together with their parents) carefully. The family-friendy range of childcare services was also rated 5 stars by our experts.

Les 2 Alpes was rated with top marks by our experts in almost all categories, which makes up a good overall rating of 4.3 stars. 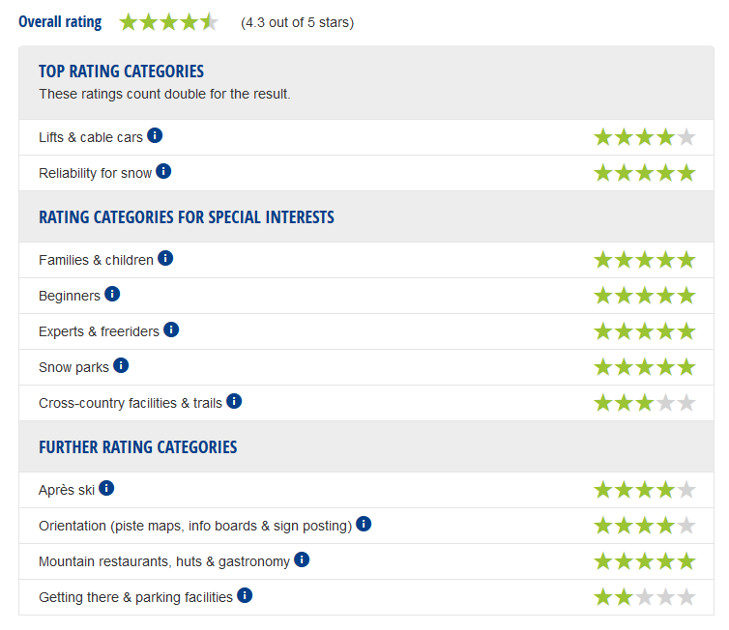 5) Activities aside from the piste

Les 2 Alpes offers plenty of leisure time activities, some of which are more unusual, such as e.g. paragliding, snow mobile tours our helicopter flights. In the resort there is a large ice skating rink with a surface of 1,800 m², public facilities organise dog- or horse-drawn sledge rides. The centre boasts shopping facilities with a large selection of shops for fashion, souvenirs and more. In bad weather bowling or billiards can be played in pubs. For your relaxation, Les 2 Alpes has a spa with different swimming pools, saunas, a fitness area and squash courts. Various beauty spas additionally offer relaxing treatments.

If you want to go partying after the lifts are closed, Les 2 Alpes is the perfect place. The local party scene is rather legendary, and the nights in the clubs are long. You can get the party started in umbrella bars and après ski huts in the ski area in the afternoon. Later on in the evening, good restaurants, wine cellars and cocktail bars offer a large range of drinks and food for all tastes. Countless pubs and several discos make for an enjoyable extension to your evening plans until late at night.

Les 2 Alpes is the touristic centre for leisure time, party and skiing fun in the Oisans mountains. The resort is on an altitude of 1,650 m, facing La Meije, which is approx. 4,000 m high. The Alpine metropolis offers about 40 restaurants, 10 bars and three discos, as well as numerous shops and boutiques and varied winter sports options from snow shoe hikes to ice climbing. Several mountain railways start from both sides of the resort centre and go up into the different parts of the ski area. Many accommodations are directly on the piste, so that you can enjoy the popular ski-in-and-ski-out. 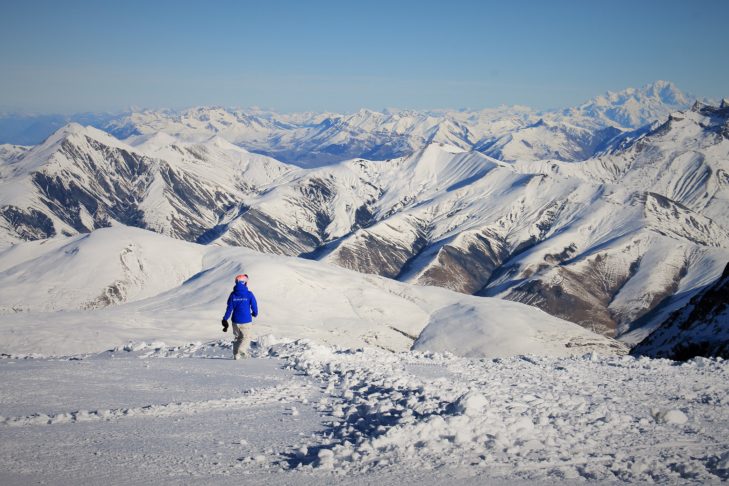 The best way to travel to Les 2 Alpes is via Grenoble, which is approx. 70 km away. Coming from the North and travelling by car, take the motorway A48 in the direction of Grenoble. Take the exit 8 in the direction of Briançon/Vizille to route D1901 via Le Borg d’Oisans to Briançon. The tunnel between Les 2 Alpes and Briançon is possibly blocked. The routes D220 and D213 lead to Les2Alpes via several serpentines. The nearest train station (70 km) as well as the airport (120 km) are also in Grenoble. From there, shuttle buses and taxis go to the ski station.