Ski like the professionals – in the Alta Valtellina ski region, skiers of every age and ability can explore the world cup pistes and ski in the tracks of world champions. The Italian Santa Caterina Valfurva ski area, with the resorts of Santa Caterina, Bormio and Valdidentro, draw skiers with fantastic pistes, great views and quaint après ski locations. 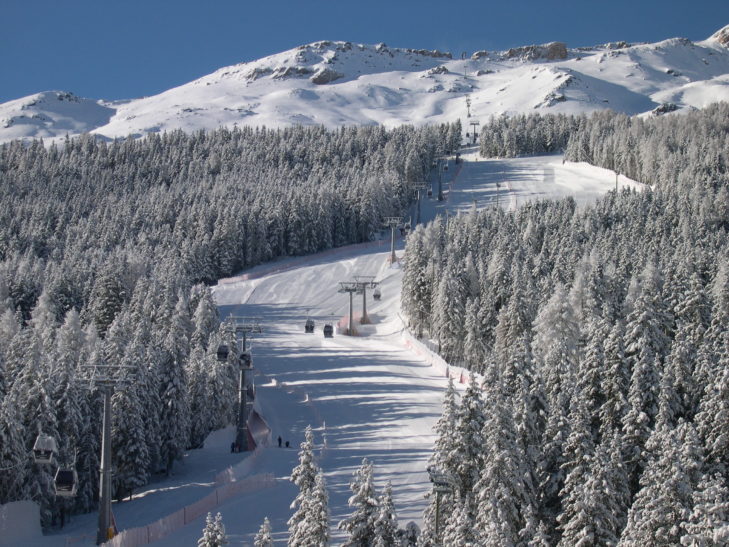 In the Lombard Alps – only a stone’s throw from the Swiss border and St. Moritz – lies the Alta Valtellina ski region with the ski resorts of Santa Caterina, Bormio, Valdidentro and Livigno. These are all familiar names to winter sports fans for the many World Cup races and World Championships in Alpine skiing and cross-country skiing that have taken place in the ski region. Challenging pistes and stunning scenery await winter sports fans on broad and narrow skis or snowboard in the Santa Caterina Valfurva ski area.

The great location of Santa Caterina Valfurva ski area at altitudes between 1,722 m and 2,880 m provides fantastic views and excellent reliability for snow with snow depths of 50 cm in the valley and over 100 cm on the mountain. Should the daily five to eight hours of sunshine affect the snowfall, then snow-making equipment will ensure that there is sufficient coverage. The 20.5 km of pistes in the Santa Caterina Valfurva ski area is closely connected to approximately 80 km of well-prepared pistes around the Bormio and Valdidentro ski resorts. The “4 Valli” ski pass is valid for all the named ski areas and more than 37 lift systems. 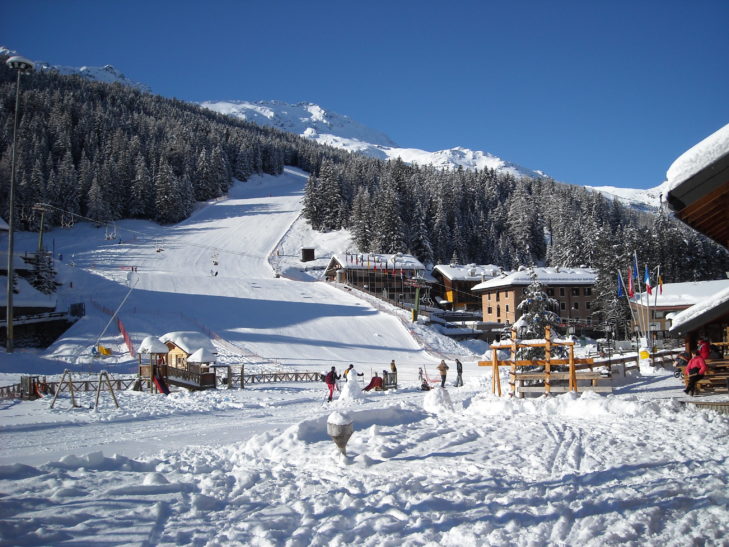 The Alta Valtellina ski region provides many alternatives with 215 km of pistes split between altitudes of 1,225 m and 3,012 m. While the Santa Caterina Valfurva ski area caters specifically to experienced skiers, Bormio provides prefect conditions for freeriders and boarders; and the ski area around Valdidentro is best-suited for families. The small, but attractive Santa Caterina Valfurva ski area finds favour with our experts. In both top rating categories “Reliability for snow” and “Lifts & cable cars”, they award a very good four stars. The snow-sure altitudes and numerous sunny hours each month play a major role. The lift systems impress with modern technology and comfortable transportation. 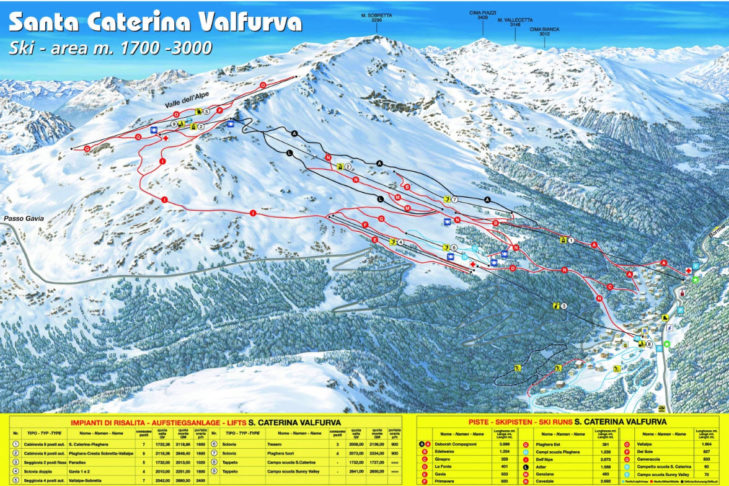 The Santa Caterina Valfurva ski area is a good choice for “Experts & freeriders” and therefore earns a good three stars from our experts. The total of 20.5 km of pistes is divided mainly into red and black categories. The 14 km of red and 5 km of black pistes provide skiers with real challenges. The 1.6 km long descent on Cresta Sobretta, where skiers descend 800 m in altitude from start to finish, is recommended only for very good skiers. The same applies to the 3.6 km long descent in Santa Caterina, with an altitude difference of 1,000 m.

Winter holidaymakers in Santa Caterina have a big advantage, namely the position of the ski location. Two top modern eight-seater gondolas, six additional lifts and two magic carpets bring winter sports fans up to the mountain directly from the resort. Our experts reward this with four stars in the category “Lifts & cable cars”. The way down goes from the highest starting point at 2,880 m to the heart of the Santa Caterina resort. On some evenings, the final kilometre of the piste is illuminated and the lifts operate into the night to bring enthusiastic floodlight skiers up the mountain.

There are good facilities for families with children in the Santa Caterina ski area and therefore it receives a good three stars in the ratings. Our experts recommend, however, that weaker skiers opt for the ski area around Valdidentro, as the pistes there are easier and not so steep. Because there is no snow park in Santa Caterina, freestylers may wish to consider a trip to the snow park in Bormio. It is where ski fans of all ages and ability will find their line.

Cross-country skiers also get their money’s worth in the ski region around the ski resorts of Santa Caterina, Bormio and Valdidentro. In Santa Caterina Valfurva, 15 km of well-prepared trails and skating runs up to an altitude of 1,800 m in the thick forest are enticing for good cross-country skiers. Things are a bit easier on the 5 km of classic trails in Bormio. In the evening, a 2 km stretch of the trail is lit up. Valdidentro offers an even wider choice for fans of flood-lit skiing: 15 km of the total of 25 km of trails are lit in the evening and cater for all skill levels.

Our experts rated the Santa Caterina Valfurva ski area with an average of more than three stars across all rating criteria. The important criteria of “Reliability for snow”, “Lifts & cable cars” and “Mountain restaurants, huts and gastronomy” achieve a very good four stars. “Orientation” (piste maps, info boards & sign posting) received three stars for the ski area, as did the ratings for special groups of skiers such as “Families & children” or “Experts & freeriders”. The latter profit particularly from the challenging pistes with a high number of red and black categories. There were also good three stars rating for “Cross-country facilities & trails”, which should be highlighted due to the famous and very well-designed trails around Santa Caterina and Valdidentro. 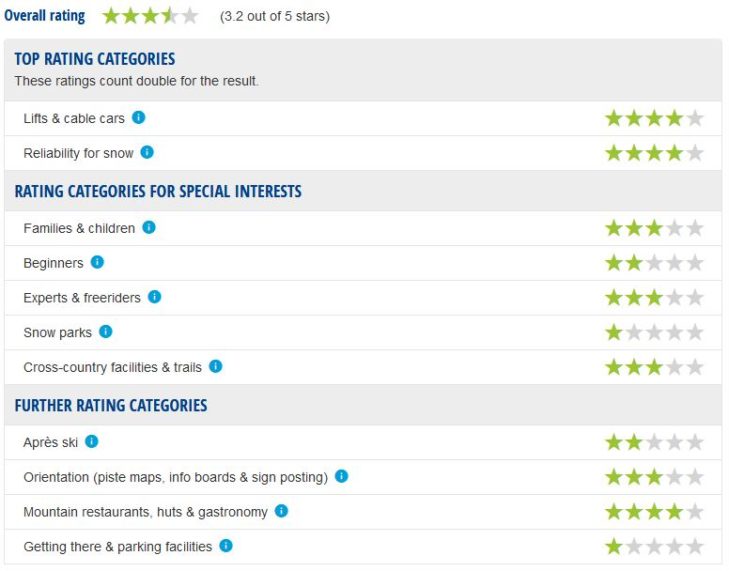 When visiting the Alta Valtellina ski region, it is advisable to plan in sufficient time to enjoy the breathtaking landscape and nature. The Stifserjoch National Park is world-famous for its variety of flora and fauna. Winter hikes, long walks or snowshoe tours are definitely recommended. Visitors can also enjoy the real Lombardy by ice skating on the natural ice rink in Santa Caterina. On bad weather days, there are also facilities for is playing tennis and indoor climbing.

The Sunny Valley Kelo Resort is the first refreshment stop in the ski area.

The quaint huts and pleasant mountain restaurants on the pistes are popular draws and good places to take a break during the day with very good regional cuisine to savour. Food and drink receive four good stars from our experts. In the Santa Caterina Valfurva ski area, things are quieter and more relaxed. For those who want to party will prefer to spend the evening in Bormio where, as the saying goes, “you can let your hair down”. It begins with the best-known après ski spot, “BeWhite”, which is the main venue for hot party nights, especially during “Happy ski night”. But things are also lively in the heart of Bormio with numerous bars, clubs and pubs to attract night owls. There are several great restaurants and pizzerias to start an evening before a tour of the clubs or a night of dancing in the disco.

A day’s break from skiing is sometimes good. Why not use a free day to visit St. Moritz or the Livigno ski area with its duty-free shopping centre? Both are accessible from Santa Caterina in 1.5 to 2 hours.

6) Locations in the ski area

Lombardy in northern Italy has been a favourite destination for many centuries. The Sondrio region attracts thousands of holidaymakers every year with its wonderful scenery, the huge national parks and the breathtaking views of the Ortler group and Forni glacier. The three valleys of Valdisotto, Valdidentro and Valfurva, where the Santa Caterina Valfurva ski area is to be found, are part of the Alta Valtellina ski region.

Santa Caterina itself lies at an altitude of 1,734 m and is a quaint mountain village with around 200 inhabitants. It is part of the valley community of Valfurva. Valdidentro and Bormio are markedly larger, each having more than 4,000 inhabitants. Valdidentro – wonderfully situated in the valley of the same name – mainly provides families with children with ideal conditions due to its flatter slopes.

In the heart of where the three valleys meet is Bormio, a real cultural and party centre in the Sondrio region and Alta Valtellina. For more than 2,000 years people have lived in Bormio and the location has long been a tourist destination. It is a recognised spa location with several thermal baths and has also several times been the venue for the Alpine skiing World Championships.

The Alta Valtellina ski region stretches over a large part of Lombardy and it takes a good 1.5 hours from Livigno to the Santa Caterina Valfurva ski area. From Valdidentro, it generally takes somewhat over an hour, while Bormio, with about a half hour travelling time, is nearest. For the journey into the ski area, it is best to take one’s own vehicle. Visitors can travel by rail to Tirano, but the onward journey by bus or taxi takes at least another hour’s travelling time. If arriving by air, the nearest airports are Bergamo, Milan or Innsbruck, but it is then a further three to four hours’ drive by hire car. By road, the drive from Munich will take a good five hours, from Bolzano, it is three hours and from Zurich 4.5 hours. It is important to get information in advance about possible road blockages because of snow. In addition, there are tolls to be paid.

Want to check to see if the sun is shining in the ski area? SnowTrex provides information about the weather and snow depths, and also gives you the chance to view webcam images.