In the San Martino di Castrozza ski area, holidaymakers enjoy a great range of winter sports facilities in the impressive scenery of the Dolomites. At altitudes between 1,404 m and 2,357 m, there are numerous easy, medium-difficulty and challenging pistes. In addition, there is a well-equipped snow park and facilities for beginners and children. 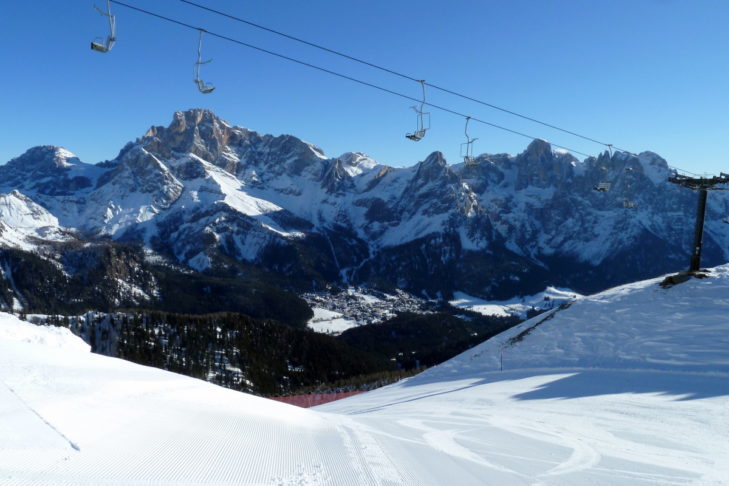 The winter sports location of San Martino di Castrozza and the ski area of the same name can be found in the province of Trentino in northern Italy. The ski region is picturesque and lies above the Primiero valley near the “Paneveggio – Pale di San Martino” nature park. The San Martino di Castrozza ski area, situated below the impressive Pale di San Martino mountain chain, gives visitors a fantastic view of the surrounding mountain peaks. This mountain range is also known as the “Matterhorn” of the Dolomites. Here skiers can experience the magnificent mountain world on runs of differing lengths and difficulties at altitudes of between 2,357 m and 1,404 m. There are 60 km of pistes of which 16 km are marked blue, 32 km red and 12 km black. A total of 23 lift systems ensure trouble-free transport to the ski pistes. These include 6 tow lifts and 24 chair-lifts as well as 3 modern cable cars. Beginners and experts will find a wide range of choices in this ski region.

The extensive facilities and modern equipment pleased our team of experts. The top criteria of “Lifts & cable cars” in the ski area were rated at 3 out of the 5 possible stars. 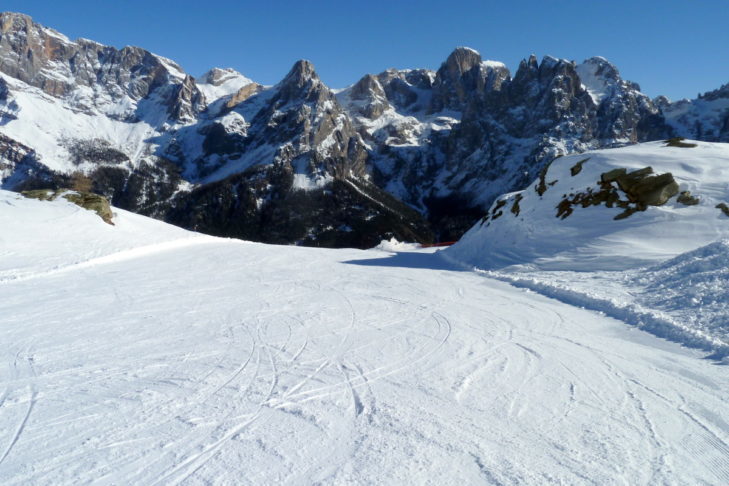 © skiresort.de
There are 60 km of pistes for the winter holidaymaker in the ski area.

The ski region in the southern-most valley in the Dolomites received points for the varied winter sport facilities, lots of winter romance and a restful stay away from the pistes. The ski area is therefore the ideal destination for active holidaymakers, families and those seeking relaxation.

The winter sports season in the San Martino di Castrozza ski area is generally very long because of the high altitude. It usually lasts from November to April and provides high reliability for snow. On average visitors enjoy 15 cm to 20 cm of snow in the valley and 20 cm to 30 cm at the mountain station. If required there is snow-making equipment available throughout virtually the whole area to guarantee fun on the pistes, even if there should be little snowfall.

A further plus point in the San Martino di Castrozza ski area is its sun-drenched position. In this part of the Dolomites winter sports fans can enjoy on average 6 to 7 hours of sunshine daily.

Our experts are also impressed by these weather conditions. There are therefore 4 out of 5 stars given for the top rating criteria “Reliability for snow”. 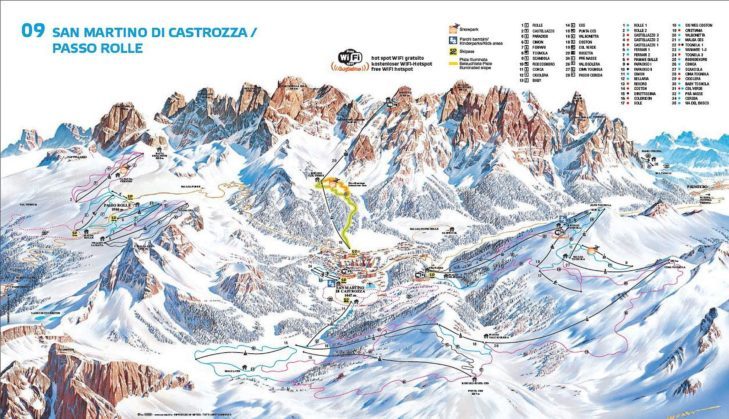 With the “San Martino di Castrozza” ski pass, visitors in the ski area have access to the pistes on Passo Rolle, on Col Verde and the “Ces-Alpe Tognola” ski circuit.

Passionate skiers and snowboarders like to buy the “Dolomiti Superski” ski pass to access a total of 1,200 km of pistes in 12 famous ski areas in the Dolomites.

Beginners can learn how to ski or snowboard in San Martino di Castrozza in the “Scuola Sci e Snowboard” and “Dolomiti” ski schools on Col Verde. There are solo or group sessions for adults and children, as well as daily outings to neighbouring ski areas and evening tuition on illuminated pistes with the emphasis on fun and action. The teachers at the ski school keep a special eye on the young guests. A training programme especially for children teaches the young sports fans how to use the sports equipment correctly. The “Prà delle Nasse” practice field, with a lift system especially for skiing newbies, can also be found in San Martino di Castrozza.

In addition, there are numerous beginner pistes such as, for example, the wide run from Col Verde down into the valley and the blue pistes “Rolle 1” and “Rolle 2” on Passo Rolle. Both the Ferrari runs are popular here, as is the “Cimon-Piste”.

Experts like to use the red-marked runs on Castellazzo. Here there are highpoints like the pistes on Cima Tognola and Punta Ces. As a special challenge, the black-marked pistes in San Martino di Castrozza are tempting. These include the “Paradiso I”, the “Direttissima” and the “Tognola 1”.

Besides that, from Thursdays to Saturdays, there is the popular night ski run with floodlighting which takes place on the 2.6 km piste on Col Verde.

Our experts found this range of skiing options very extensive. In the rating categories “Beginners” and “Families & children” they have given 4 out of 5 stars. “Experts & freeriders” receive 3 out of 5 stars. 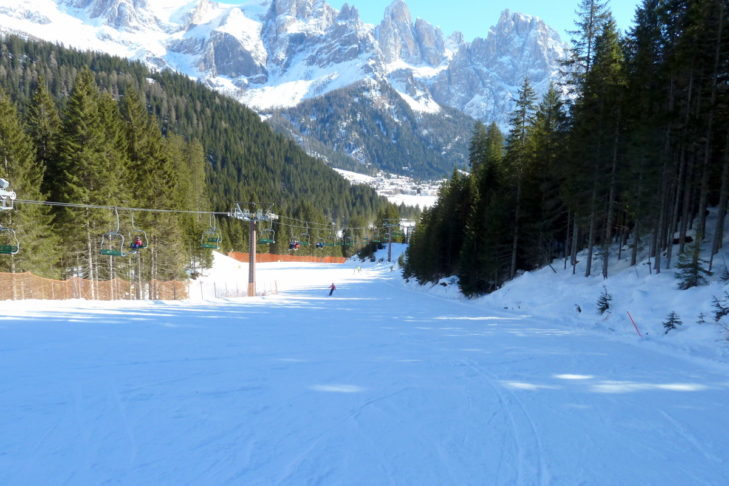 There is also a modern snow park in San Martino di Castrozza ski area. Over around 900 m there are various boxes and tubes. The fun park is equally suitable for beginners and professional freestylers because of its structure. On Thursdays, Fridays and Saturdays the snow park is lit up in the evenings for longer-lasting fun and action.

The choice in the San Martino di Castrozza fun park particularly pleased our experts. They award it the maximum number of 5 stars in the “Snow parks” category.

The San Martino di Castrozza ski area is also known for its excellent cross-country facilities. Over some 30 km there are numerous runs for skating and for lovers of the classic style. At the edge of the San Martino di Castrozza ski resort there is the “Centro Fondo” cross-country centre with 9 km of blue, red and black marked trails – 2 km are additionally equipped with flood lighting. A real secret tip is the 5 km long high trail on Passo Rolle. It goes up to an altitude of 2,000 m and provides several challenges to the fitness of cross-country skiers. A further challenge for experts is the 15 km long trails on Passo Cereda.

The trail facilities in the San Martino di Castrozza ski area are impressive. Our experts therefore award the diverse choice 4 very good stars out of 5 for “Cross-country facilities & trails”.

The San Martino di Castrozza ski area is impressive, with very good facilities for “Beginners” and “Experts & freeriders”. Further plus points are the excellent “Cross-country facilities & trails” and the well-equipped fun park. The ski region received a total score of 3.7 out of five stars from our team of experts.

In the San Martino di Castrozza ski area, visitors can enjoy a pleasant end to their day of winter sports. In the ski region, there are several inviting bars and places to eat for après ski in good company. Popular choices are, for example, the “Enoteca da Renzo” and “Lo Sfizio” bars. The “Refugio Tognola” at the valley station of the Tognola lifts is always busy. Another good spot for party-goers is “The Dolomites” ranch bar in the Via Passo Rolle. The restaurants and guest-houses take care of physical well-being with their international and regional specialities. Our experts awarded 3 out of 5 stars in the category “Après ski” for this very varied après ski offer.

After welcome refreshment, visitors can either go back on the piste or to one of the numerous other leisure facilities. Families with children are often drawn to the “Nasse Park”, a children’s playground in San Martino di Castrozza with play equipment and toboggan runs.

Young and old alike can enjoy the snow together on the 400 m long sledge run with its own lift on Passo Rolle.

Fans of untouched winter scenery meet high up on the Pala group at Cavallazza and Passo Rolle for snowshoe hiking. In the San Martino di Castrozza ski area, there are also facilities for ice climbing and ski mountain climbing.

The resort of San Martino di Castrozza skilfully combines the traditional and the modern. As well as comfortable accommodation in guest-houses, boarding houses and hotels, visitors will find a lot of rustic charm and alpine art and culture in the streets and alleys. San Martino di Castrozza closes the through roads in the late afternoon, so winter holidaymakers can stroll and walk around safely and carefree.

The community originated from the little ancient hospice of St. Martin and St. Julian. It gave protection to travellers who were travelling from the Primiero valley over the Passo Rolle into the neighbouring Fleims valley. In the 19th century, it attracted many visitors to the Alps because of its picturesque mountain peaks.

Information about the region and the water world of the mountains is available from the Villa Welsperg at the entrance to the nearby Canali valley, between the neighbouring villages of Primiero and Tonadico. In Primiero there is also a small ethnological museum in the Palazzo delle Miniere. 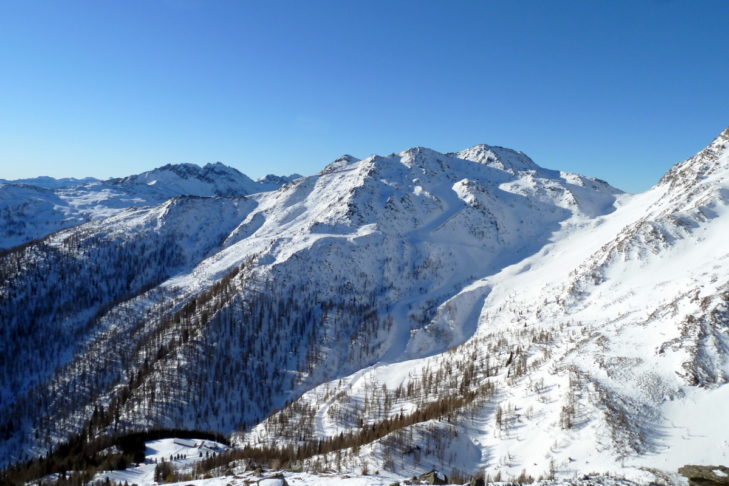 The San Martino di Castrozza ski area is most easily accessible by road using visitors’ own vehicles. From Germany and Munich, the route is via the A8 and A93 motorways to the Austrian border at Kiefersfelden and then continues on the A12 to Innsbruck. From here the A13 goes to the Italian border at Brenner and then on the A22 to Kaneid near Bolzano. Finally, the country roads lead via Birchabruck, Passo Lavazé and Pardatsch to the San Martino di Castrozza ski area in the Primiero valley.

A good alternative to one’s own vehicle is the journey by rail. There are international connections from Munich, Innsbruck and Verona to the railway station at Feitre, which is about 50 km away. From here, winter holidaymakers are best advised to travel to the ski area with a hired vehicle.

Travellers who prefer to arrive by air can opt for the airports at Venice (around 140 km away) or Verona (around 190 km away). From there the use of a hired vehicle to travel to the San Martino di Castrozza ski area is recommended.

Want to check to see if the sun is shining in the ski area? SnowTrex provides information about the weather and snow depths, and also gives you the chance to view webcam images.